Continuing with the (ir)regular looks at Top Shelf's AX anthology (the first part is here):

This is a different sort of thing than the previous stories in the volume, but it's certainly welcome.  It's an apparent bit of nonfiction (except, wait, a word balloon in the first panel reveals that it is fiction, so it fakes the truth well), as author Shimada relates how he was enlisted to translate a book about motorcycles for a friend who owned a Brazilian Eldorado NRA.  Shimada then relates the story from the book, taking him and his friend on a journey to post-WWII Brazil and describing how a motorcycle shop owner received assistance from two German engineers as they designed and began to release a line of motorcycles, until it turned out that they had a terrible secret (which probably isn't too hard to guess, given the date).  It's a fascinating story, and one that I thought was true until I tried to look up information about the brand of bike and found nothing, then spotted that easily-forgotten word balloon.  Shimada tells it well, revealing details at the right pace, throwing in recurring gags, adding some meta-humor as he and his friend interact with the scenes that they are observing, and detailing everything in a consistently thick, cartoony line.  This story might be different from the tales of urban ennui and trippy freakouts in the rest of the book, but that doesn't make it any less good. 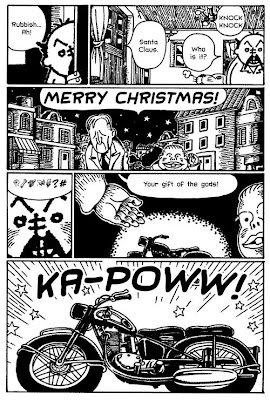 "The Neighbor"
By Yuka Goto

This story about a couple of antagonistic housewives goes back to the heta-uma or "bad-good" style, using crude, fairly ugly drawings to make a point about the ridiculousness of its plot, or something.  There's a woman who is annoyed with her neighbor, and they have an escalating conflict that eventually erupts in a ridiculous fight scene, although that ridiculousness mostly comes from the awkward, stiff art, making their shoves and flying kicks looks hilariously silly.  That has to be on purpose, and it's amusing for it, but that's about all there is to it, unless one wants to extrapolate some sort of statement on society from the intensity of what is a pretty dumb conflict.  It's probably best to just chuckle and move on though.

Aaand, it's back to the incomprehensible, with a nonsensical "story" about a girl who goes to the eye doctor, who diagnoses her as cross-eyed and treats her by having her do a "sit on this and spin" for the length of the title.  It seems like it's supposed to be funny, although it also seems like it just doesn't translate; a line like the doctor's "it's like 'crossed eyes=masturbation, googly eyes=free sex', maybe" might be some sort of pun in Japanese, but it just doesn't make sense in English.  There is a kind of funny bit in which we see that she sees the pudgy, bald doctor as handsome through one eye, a dog through the other, and a scribbly mish-mash together, but other than a head-scratching, "huh?", that's about all there is to get out of this story.

, but if this story is any indication (and judging by the descriptions I've read), I doubt I would enjoy it.  The somewhat crude art, which alternates between simplistic figures and detailed, messy bodily functions, is sometimes interesting, but the "story" is sort of a stream of consciousness litany of sex and weirdness, with nothing really holding it together except Nemoto's desire to draw as many penises as he can.  There's one bit that reminds me of a Shintaro Kago concept, in which a character says, "If you shag too much with one partner, cock can spread to the woman apparently", with Nemoto going on to depict women with penises growing in various horrific configurations from their bodies, but then moving on to some other nastiness a few pages later.  This is gross, transgressive material, but it's not really interesting, just tiring.  The best part of the story is the title page, which contains an organic intricacy and detail that hints at much more than the story actually holds: 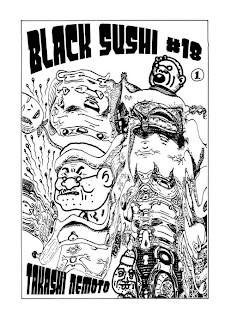 This is another weird one, but it's got a goofy, deadpan sense of humor that saves it, which is probably a good  indication that Yusaku Hanakuma's other comic available in English, Tokyo Zombie

, is one worth checking out.  This story sees the wife of a character sporting Hanakuma's signature Afro design bear children that turn out to be dogs.  That's right, plain old dogs.  Being animals, they don't survive as well as humans, whether because their mother doesn't have enough breasts, or being murdered horribly as society turns a blind eye.  It's silly, and definitely meant to be so, but there's something poignant about the way the man cares for his children and treats them like people while everyone else doesn't care.  There might be a societal analogy to be read into the story here, something about people's uncaring, self-centered nature, but that's probably too much of a stretch.  It's probably best to think of this as a goof, and it's a pretty good one.
-----

And that's part two.  More coming before too long, if we all clap our hands loud enough.
Posted by Unknown at 10:30 PM