Ghostopolis: TenNapel knows how to bring the beasties 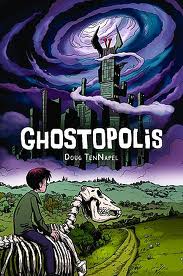 Doug TenNapel often gets lumped into the all-ages category of comics, but his work often deals with pretty complex issues and emotions, featuring well-developed characters and interesting relationships; it’s definitely not something that should be shunted into the ghetto of “kiddie stuff”. Plus, he comes up with crazy worlds to explore and monsters for his heroes to fight, and depicts it all with a dynamic, tossed-off style that really brings everything to life. It’s always tons of fun, fast-moving and exciting, like a well-done animated film.

This particular entry in TenNapel’s oeuvre sees a young boy named Garth get accidentally sent to the afterlife by a bumbling ghost hunter, leading to an adventure involving revolutionary politics among ghost kingdoms, human incursion into death’s realm, family connectedness, and the rekindling of ectoplasmic love. While Garth does meet up with his dead grandfather, try to understand the poor relationship between his mother and her father, and learn to appreciate life, the story barely slows down for him to breathe, as he gains a skeletal horse and ends up in conflict with a man who has managed to take control of the various ghostly kingdoms (including mummies, zombies, boogeymen, and goblins), eventually joining a revolution to depose the evil leader. Meanwhile, Frank, the aforementioned ghost hunter, follows him into the afterlife with the help of his spectral girlfriend Claire (whose last name is Voyant, ha ha), and he gets to learn lessons about love and courage as well. It’s a rollicking ride, full of twists, chases, and supernaturally-powered battles, and it’s pretty funny as well, with plenty of exaggerated reactions and amusing dialogue.

TenNapel’s artwork is what really sells that humor, along with the action, excitement, and emotion, and his detailed world-building is something to see. He uses a somewhat scratchy line, but the roughness is lessened by clear coloring, and while the big-eyed character designs might appear awkward at first, they end up being endearingly emotive. In fact, he manages to wring quite a bit of expression even out of the loyal horse skeleton, and his designs for the various other dead creatures and background denizens are tons of fun to look at. The kinetic action is pretty great too, with lots of chases (an early escape from some dinosaur skeletons is a great way to introduce the dangers of the afterlife) and fights, and a final battle that manages to keep growing in scale to an awe-inspiring spectacle.

This might be the best work that TenNapel has done in his career, a mature examination of familial love and responsibility, the value of life, and the usual themes of courage and responsibility that doesn’t shove these aspects into the readers’ face, but incorporates them into a fun adventure in an imagination-fueled world. It should be interesting to see what he comes up with next, but at the rate that he cranks out comics, we shouldn’t have long to wait.
Posted by Unknown at 12:00 PM