How to Understand Israel in 60 Days or Less: I only have about 30 more days to go...

Posting is very light these days due to craziness in my personal life from pending familial incrementation.  We'll see how well I can continue with the content, since I don't want people to forget I exist!

Links: This tribute to Harvey Pekar that Dean Haspiel did for Entertainment Weekly is really nice.

Via Sean T. Collins: I may have found my new favorite webcomics artist: Emily Carroll.  This recent strip of hers, "His Face All Red", is pretty amazing.

Via Alan David Doane: John Roberson has made a 2002 anthology done to benefit William Messner-Loebs called Working for the Man available for free download.  Looks good; I missed it the first time around, so lucky for me. 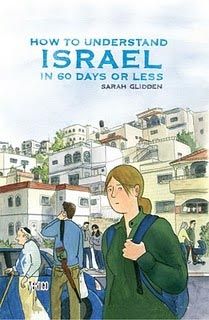 So what is the deal with Israel anyway?  That's the opening (and closing) question of this book, and its answer certainly shifts over the course of the read, at least for its author and central character if not the reader.  In 2007, Sarah Glidden took a Birthright trip to Israel, expecting to confirm her beliefs about the region and its longstanding conflicts, but hoping to learn more by experiencing it firsthand.  And luckily for readers, she takes us along for the ride, allowing free access to what she saw and heard, as well as her interpretations and emotions, and her attempts to make sense of them.  It's fascinating, enlightening, educational, and moving, an "only in comics" journey through a historically complicated land, and also the head of the person doing the traveling.

While Glidden is Jewish, she makes it known right away that she tends to lean to the anti-Israeli side of the region's conflicts, so the entire journey is a struggle for her, an ongoing attempt to reconcile her views and her knowledge of history with what people tell her, with the propaganda (from both sides) that she hears, and even with what she sees with her own eyes.  It's an emotional experience, for her and the reader, and an informative one, both in the historical anecdotes that she relates (did you know that Hebrew has only been a spoken language in modern times for a little over 100 years?) and in what she witnesses during her trip (apparently, Bedouins are an even more oppressed minority than Palestinians in Israel, but they have no fiery religious/nationalistic conflict to draw attention to themselves).  And impressively, she never makes it a dryly narrated series of geographical scenes, but brings life into the entire journey through conversation with other travelers, bits of history, occasional flashbacks to earlier times in her life, and imaginative flights of fancy in which she interacts with historical figures, holds a mental court over whether the guide is biased toward Israel, and comes up with other clever ways to illustrate what could be boring bits of exposition.  The book never flags, always remaining interesting through its multi-level approach of a vast, nearly incomprehensible subject. 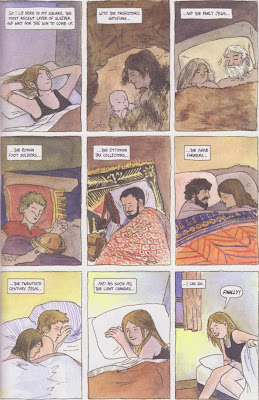 And that's the true triumph here: readers will come away from this book feeling like they know a bit more about Israel, but also understanding that whatever they think of the situation, it's several thousand more times complicated than they could have possibly imagined.  Glidden's attempts at preparation for the trip are kind of laughable; she states that for several weeks beforehand, she "spent every spare moment reading about Israel...start[ing] with the beginnings of recorded history and working [her] way forward."  That's the amount of information required to even form a basic foundation of knowledge on the subject, without taking into account the millions of personal accounts, feelings, interactions, events, and so on, even within the last century.  Glidden probably realized the folly of her pursuit afterward, and while she doesn't make a big deal about it, she does present herself in a somewhat self-deprecating light, often making incorrect assumptions about people or acting in a know-it-all manner.  Afraid of being "brainwashed", she seems wary of a pro-Israel bias everywhere she goes, and a few traveling companions (her friend Melissa and the tour's guard, a young man named Nadan) often set her straight, or at least question her statements and make her rethink her positions.  While she doesn't finish her journey with reversed opinions, she does seem to have a fuller understanding of the region, and a realization that most people involved have good reasons for thinking the way they do.  Hopefully readers will feel the same way. 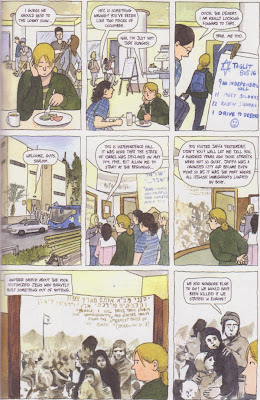 But even if they don't, if they feel that Glidden is hopelessly biased herself, they should still enjoy her storytelling acumen here, especially in her evocative art, with its ligne claire lines simplifying characters down to a minimal, yet expressive cartooniness and gorgeous watercolors adding life through warm skin tones, dusty desert browns, lush greenery, and deep blue water.  While many scenes consist of characters talking or listening to a speaker, the panels never just feature repetitive figures and word balloons; instead, Glidden fills them with background detail, jumps around to see the expressions of various people, or comes up with interesting ways of conveying information, like having ghostly historical figures appear in the scene, making a landscape model being viewed come to life with miniature armed forces, or having herself converse with people in photographs (which are amazingly depicted, by the way, the black and white images converted to gray watercolor brushstrokes).  It's never boring, and often is the opposite, being arrestingly fascinating and emotional, especially in a centerpiece scene that sees Glidden break down crying during a speech about peace, a cascade of mental imagery flooding the panels and making the onslaught of emotion she feels completely understandable and relatable.  It's just one tour de force in a book full of them. 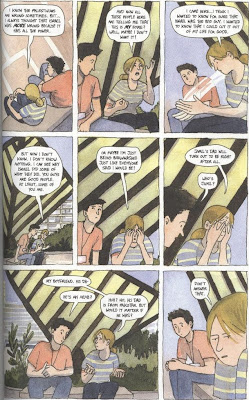 Maybe that's the crux of this book: the combination of personal and political.  For so many, that emotion is inseparable from their stance on the conflict, along with an additional confusing layer of religious beliefs to muddy the waters even further.  Glidden has performed the admirable service here of directly approaching what she believed to be true, and attempting to share the small bit of understanding that she gained from the situation.  That she manages to convey it so efficiently and, yes, entertainingly, is a testament to her skill, a demonstration of her firm grasp of the language of comics.  Everyone who reads this book will come away enriched, and whether they agree with Glidden's opinions or not, they can see the real people and history that sit beneath the political and religious posturing, and understand the need for peace.  That's the impossible dream, but people like Glidden are the ones doing what they can to bring it to life.
Posted by Unknown at 10:48 PM