Aqua Leung: Would it have hurt to include a character named Jethro?

Before I start with the blathering about comics, I want to give a quick recommendation to the movie Bug, which came out last year. It's sort of a horror movie, but it's more of an exercise in paranoid delusion, starting slowly as a broken-down, redneck-ish Ashley Judd takes in a drifter (Michael Shannon, who seemed really familiar, but probably because he had a small role in Before the Devil Knows You're Dead, which I recently watched) and becomes involved in his beliefs that he's infested with microscopic bugs as part of a government experiment on soldiers. It eventually builds into a disturbing, nasty, violent climax, with plenty of nudity, freaky shit, and ambiguity about whether or not any of it is real. Recommended, if that sounds like your sort of thing. It's definitely mine. 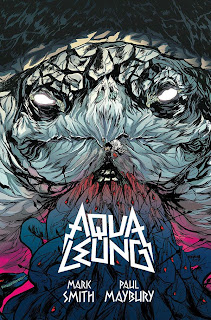 As a fan of The Amazing Joy Buzzards, which writer Mark Andrew Smith co-created (along with Gyakushu's Dan Hipp), I was looking forward to this exercise in undersea fantasy. The preview art certainly looked pretty neat, and the idea of epic ocean-floor battles seemed unique enough to be pretty cool. Unfortunately, I was fairly disappointed by the final result, and in an area I didn't expect: the overly-serious writing. Smith brought a light, fun touch to AJB, so it's really surprising to see him take such a ponderous tone here, with plenty of lengthy speeches about honor, destiny, and other such weighty matters. While that might work for some, I found it quite tiresome after a while, especially when I came across a page that was covered in word balloons which would surely be bogged down in long speeches.

But anyway, the story seems to be a fairly generic fantasy riff, following the eponymous young man who was orphaned at a young age but turns out to be the son of the Octopus King, who once united all the undersea kingdoms, but fell to treachery. After discovering his true heritage, Aqua is spirited away to the ocean to undergo training and learn about the ways of the sea, eventually leading an army to recover his father's kingdom. It's not a bad idea or anything, but the plot and script just feel so generic, with little to distinguish it from any other Lord of the Rings knockoff other than the undersea setting. And while the oceanic stuff is a unique idea, the presentation is fairly standard; rather than swimming or making use of the watery environment, characters simply march along the ocean floor. Actually, the main purpose of the setting seems to be to provide the various races that populate the story, like fish, crabs, lobsters, and octopi.

The plot isn't any great shakes either; as mentioned before, it's a standard fantasy "regain the lost kingdom" deal. I even found the subplots somewhat hard to follow; a mission in which Aqua and some pals infiltrate an evil kingdom to steal a fire-based weapon included an unexplained scene in which they stop off to assassinate a previously-unmentioned character (unless that was supposed to be the evil king, but like I said, it wasn't explained). And then, after a big deal was made about the powerful fire they stole, they fall asleep around a campfire made from that fire and allow it to be stolen by sea monkeys (which, charmingly, are depicted as looking just like baboons). Then they find the sea monkey kingdom on fire and just light a stick with that fire, apparently recovering enough of the weapon to complete the mission. Why weren't they more protective of their "quest item"? And couldn't anybody now come and light a stick from the burning monkey kingdom and have their own weapon? I dunno, it just seems like much of the story was poorly thought out.

The characters don't really inspire much interest either. Take Tiberius, a lobster with one eye and a tragic backstory involving the slaughter and rape of his family that's so generic it's almost laughable. No points for guessing whether he gets revenge while dying heroically. Some of the others are a bit better, like Sonny, Aqua's fishy mentor who looks like a character out of a Spongebob cartoon: 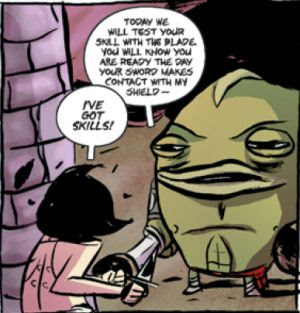 Or a tiny octopus named Ringo (son of George, who, along with John and Paul, acted as advisors to Aqua's father) who never speaks but sure looks cute:

There are a few others, like the gigantic octopus king that enslaves Aqua as a means of training him, or an enigmatic archer that joins the crew late in the game in order to have some badass moments during the climactic battle. But none of them really seem worth dwelling on too much; as a whole, the plot and characters just aren't very interesting.

But it's not like the whole thing is a wash. No, Paul Maybury pretty much saves the book by himself (along with Russ Lowery, who provided the incredible colors), providing some amazing visuals and doing some really unique, standout stuff that makes the book really stand out visually from anything else on the stands. While he starts out a little rough, and even in the later parts of the book seems to have some trouble with varying line thickness, he really comes up with some cool stuff, like the character designs that vary from Aqua's Scott Pilgrim-like simplicity to some of the grotesque, wrinkled creatures that they confront (or team up with), like the, um, Freudian things guarding the flame weapon:

Or the nasty-looking crabs, the evil opponents that Aqua's army faces in the volume-ending battle:

Or even the weird, half-human, half-octopus nature of Aqua's father, who looks like a man with tentacles protruding from his back:

And then there are the crazy visual tricks that Maybury throws at the reader. In one scene, Aqua alights on the lower lip of a giant sea beast whose long rows of teeth continue all the way to the edge of the page; upon turning the page, the reader sees that the jaw of the creature, which already seemed gigantic, continues across a double page spread and onto the next page following. It makes for an awe-inspiring sense of scale (even though I don't really know what's going on in the scene). At another point, when Aqua first enters the ocean, he is hit with a barrage of sensation, which Maybury (or possibly just Lowery) depicts as a psychedelic mass of colors. During the final battle, the initial fighting is represented as a hail of arrows coming from both sides, covering a double-page spread to the point that it looks like a black cloud. It's effective stuff.

And while I'll leave those scenes to the imagination, I had to highlight my favorite page of the book, from the aforementioned scene with the giant monster, which reminded me of the "cave on Dagobah" scene from The Empire Strikes Back. On this page, Aqua has a vision of a giant electric eel (I think): 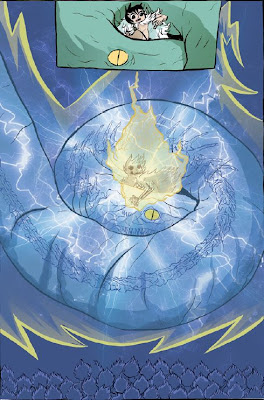 I love the lightning bolts, and the brightness of the scene. It's very striking. In fact, I should compliment the colors in general, which really bring a whole new dimension to the book. I read an interview where Maybury stated that he wanted to avoid the typical blues and greens of undersea stories, so he went the opposite direction, using a lot of bright reds and yellows. He certainly succeeded; many of the pages are eye-searingly striking, looking like nothing else out there. And Lowery pulls off some cool computery effects too, like this scene of the monkey kingdom on fire: 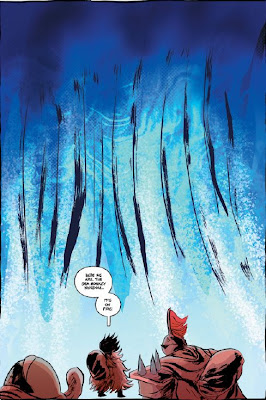 It's a beautiful-looking book at least, and whether that's enough for you will let you know if you want to read it. I certainly wouldn't recommend it for the plot, and I don't know if I'll even be that interested in the second volume, but I will definitely be keeping my eye on Maybury; he's a talent to watch, since he can only improve.
Posted by Unknown at 1:09 PM