Hey, I forgot to mention this earlier: I've got a review of Marvel 1985 #1, the first issue of the new miniseries by Mark Millar and Tommy Lee Edwards, up at Comics Bulletin as part of a "slugfest". Enjoy. And then read this: 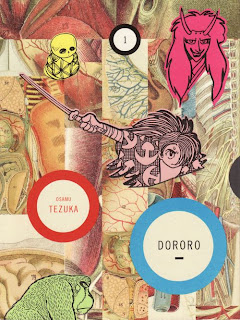 So this is apparently kind of a lesser work from Osamu Tezuka, an unfinished series from the late 60s mixed in with all the other stuff he had going on. But you could've fooled me; it's just as fun and crazy as everything else I've read by Tezuka, and it's full of action, gore, and weird supernatural monsters and demons. I gotta say, I totally dug it.

Here's the bizarre plot: an official named Lord Daigo makes a deal with 48 demons to become the ruler of all the land, offering them each one part of his unborn son's body. When the child is born, he's a limbless, blind, deaf lump of flesh, so his father sends him down the river in a basket. He's eventually discovered by a kindly doctor, who decides to raise him after taking pity on his appearance and seeing his desire to live: 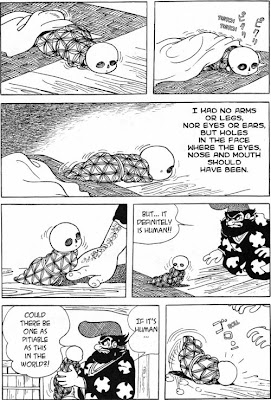 Eventually, the doctor devises a series of artificial limbs and other devices like glass eyes and a wig that make him look normal. Also, he has amazing psychic abilities, which is how he communicates and is able to perceive his environment. Hey, why not? But their life is disrupted by the constant harassment they receive from demons and monsters, who are attracted to the boy: 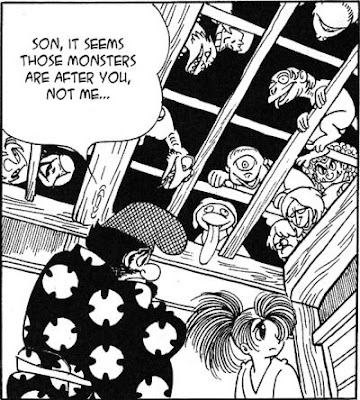 I love Tezuka's rendition of those goofy Japanese supernatural creatures. So the boy takes on the name Hyakkimaru (which means, roughly, "boy of 100 demons") and goes out into the world on his own. He has some adventures involving a blind swordsman who inspires him to hone his skills and a band of wounded refugee children who give him the hope to survive, and then he ends up wandering the land, searching for the various demons who stole his body parts so he can recover them and become whole.

Oh yeah, and then there's the title character, a young boy thief who Hyakkimaru sort of takes under his wing after rescuing him from some bad guys. Dororo (which is sort of a kiddie pronunciation of the word for "thief", dorobo) has his own tragic backstory, and the two of them go on adventures together, always keeping up kind of an adversarial relationship, since Dororo wants to steal Hyakkimaru's swords (which are stashed inside his artificial limbs; see examples of their use below). Apparently, Tezuka thought Dororo was the more relatable character, but audiences (including myself) preferred Hyakkimaru, so his adventures became central to the series.

And man, those adventures are crazy awesome. He's always getting into battles, either with freaky demons or regular bandit types. From his first appearance as an adult, we get the idea of the kind of balls-out action Tezuka is going for here: 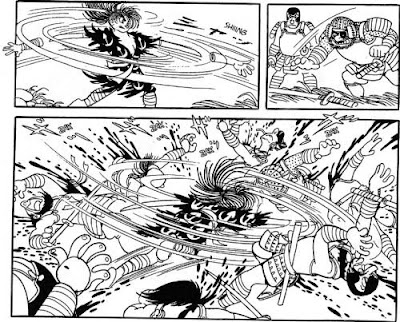 There's plenty of blood and swordfights, in the awesomely dynamic style Tezuka does so well, like this fight with a demon dog: 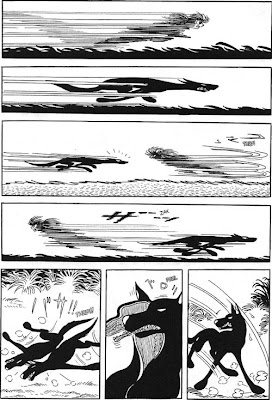 Much of this volume is taken up with the origin stories, but we also get a couple adventures involving demon-hunting. The first, about a woman/frog monster who has enslaved a village (and also has something to do with a face-shaped tumor, which was strange) is pretty enjoyable, but the final story, about a possessed sword, was probably my favorite part of the book. It begins with Hyakkimaru facing off against a swordsman who randomly challenges him, leading to a 20-hour psychic battle. Dororo ends up stealing the evil sword, which makes him go on a killing spree in the local village (although I don't know if he actually kills anyone, or just attempts lots of violence). Eventually we learn the history of the cursed sword, which is a nice look at the way violence begets violence, and how its effects can destroy someone's spirit. The swordsman who challenged Hyakkimaru turns out to have a pretty awful backstory, in which he was ordered to kill a bunch of innocent laborers to prevent secrets from falling into enemy hands. He doesn't want to do it, but he eventually follows orders, leading to a horrific display of violence: 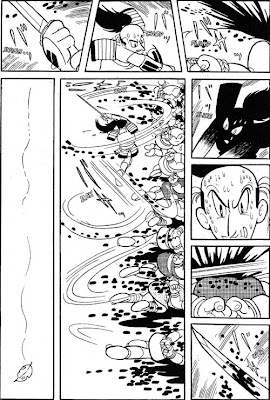 It's harsh stuff, and when he eventually meets his end at Hyakkimaru's hands, it's tragic and sad. That's the stuff of good samurai tales, even when it's mixed in with Tezuka's weird blend of action and comedy.

That's right, this is like most anything by Tezuka; there are anachronisms and fourth-wall-breaking moments (at one point, a character receives a message, states "I can't read", and then presents it to the reader to read for him), and plenty of goofy slapstick. But he's got such command of the comics form, it's all so readable and fun and compelling. The action is all clear and fast moving, and he occasionally uses the Jack Kirby-style technique of making it appear to protrude outward from the page: 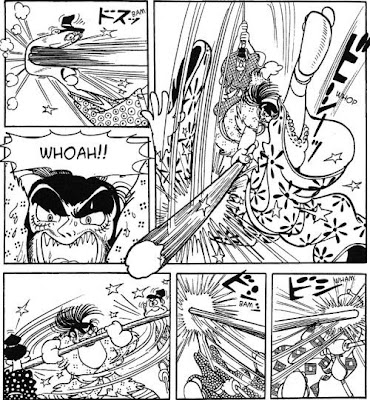 I also love the cheeky way he mixes comedy and drama. In one scene, we see a scene of chaotic warfare: 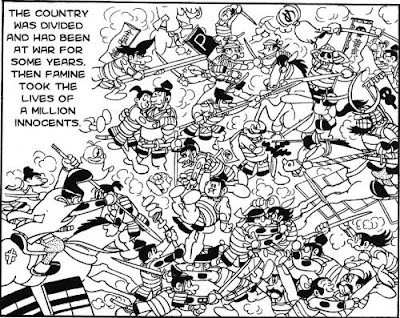 But even in the midst of such a serious scene (millions died!), Tezuka can't resist throwing in bits of comedy like two soldiers waltzing, a guy using his sword as a shish-kebab or his own decapitated head. Man, that's weird, but it keeps things from getting too serious and lets us just enjoy the story.

So, I dunno, maybe this is a "lesser" Tezuka work, but it's a good bit of coolness in the middle of everything else he always had going on. I'll definitely read all three volumes; now let's get all his other stuff made available in English, okay?
----- 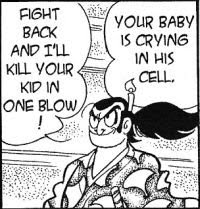 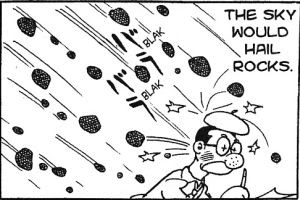 And I think there was a Hyoutan-Tsugi at some point, but I can't find it right now.
Posted by Unknown at 10:18 PM