Trying...Trying to get caught up...

Salt Water Taffy, The Seaside Adventures of Jack and Benny, Volume 1: The Legend of Old Salty
By Matthew Loux 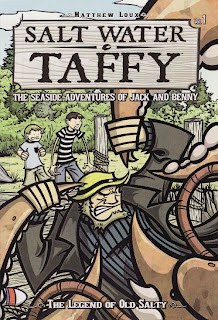 I never read Matthew Loux's previous book, Sidescrollers, due to the middling reviews I saw, but after checking out this new all-ages adventure of his, I might have to read that one. If it's anything like this bit of amiable fun, it should be some good reading.

In this first volume of a continuing series of 96-page graphic novels, Loux establishes an interesting setting for his protagonists, a pair of young brothers named Jack and Benny. They've traveled to the small coastal town of Chowder Bay, Maine for the summer, and while eight-year-old Benny is optimistic, eleven-year-old Jack expects it to be a boring place with nothing to do (their house doesn't even have a TV!). A taste of the eponymous candy, a local delicacy, begins to soften his complaining spirits, but he really begins to enjoy himself when he and Benny make friends with Angus O'Neil, a fisherman and old friend of their father who has a penchant for tall tales. But might there be a hint of truth in his crazy stories about a giant lobster that plagues the coastline? The boys did see something large crawl into the ocean from their bedroom window...

It's a pretty appealing book, especially since Loux's artwork and storytelling are just plain enjoyable. He has a unique way of depicting characters in a spindly-limbed, acutely-angled fashion: 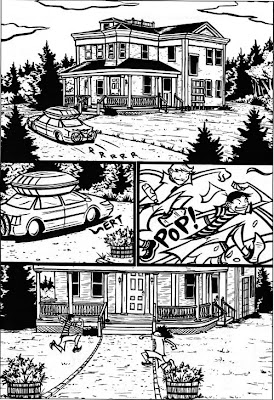 It's rather charming, especially when showing what bundles of energy the kids are; they seem to be in constant motion. There's also the occasional bit of loose-limbed, Peter Bagge-style motion: 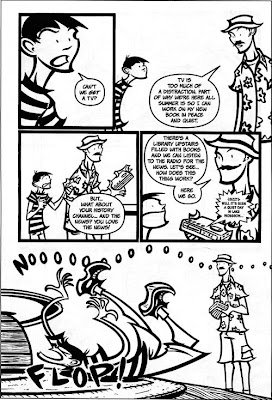 I love that stuff. I'm a little less enamored of the odd oval mouths that the boys sometimes sport: 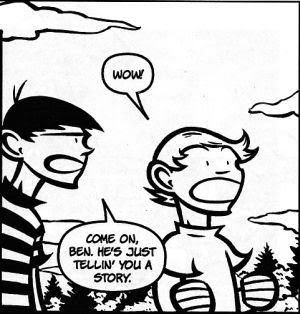 But that's nothing that can't be overlooked. Loux also does a great job of establishing the setting, placing his cartoony characters against lush, richly-detailed backgrounds: 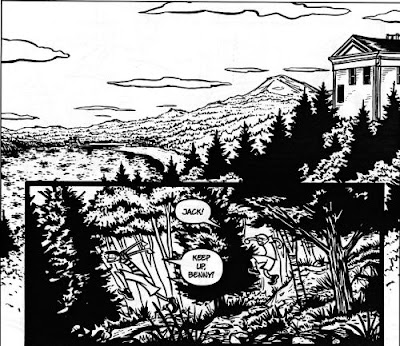 And the action is dynamic and enjoyable, like in this scene from one of Angus' stories: 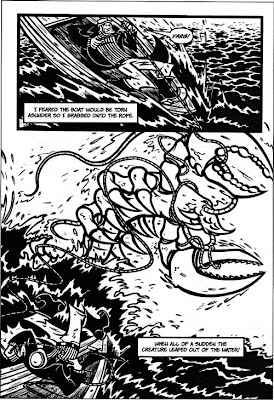 All in all, its a really fun book. It might not be the most hard-hitting or consequential comic of the year, but it's a good time, and something that should do well with kids. Hopefully someone will be able to get it into their hands.

And this is just the first volume (due out on May 7, by the way). The second installment, subtitled "A Climb Up Mt. Barnabas", is scheduled to arrive in the fall. I hope Loux can keep making these for as long as he wants.

This review was based on a complimentary copy provided by the publisher.
Posted by Unknown at 10:49 PM