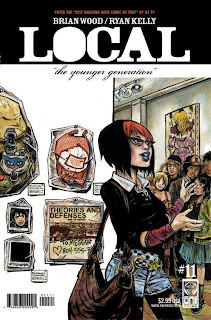 In this penultimate issue of Local, Brian Wood and Ryan Kelly (who co-wrote the issue this time around) deliver what might be their best issue yet, touching on the invasiveness of biographical storytelling, self-reflection by artists, and the folly of trying to discern a story from only small fragments. It certainly gave me plenty to think about, and that’s what art is all about, right?

This time around, series protagonist Megan is living in , but we don’t follow her too closely. Rather, we watch an office co-worker of hers, a young artist named . As the cover of the issue indicates, ends up stealing a bunch of mementos from Megan’s apartment and displaying them as her senior project, claiming Megan is fictional. It’s an awfully intrusive and horrible thing to do, and Megan is shaken, as you can expect. But when you think about it, that’s pretty much what Wood and Kelly have been doing with this entire series. Since each issue takes place a year later than the last, and only features a small incident, we are limited to small fragments of Megan’s life. We may think we know her, but do we really? To act as if these bits of kitsch can tell us everything about her is pretentious and presumptive; it’s almost as if Wood and Kelly are lashing back at themselves for not doing justice to their creation. It’s a wonderful little bit of meta-commentary as the series is coming to a close.

There’s also the interesting Nancy, who, as the issue’s title indicates, is a member of “The Younger Generation”. While this was an awful thing to do to Megan, maybe she didn’t see it as such. This younger generation is used to putting themselves out there for the world to see, through Myspace, blogs, YouTube, or whatever other channels they find. As the world continues to shift to this style of tell-all communication, maybe what she did wasn’t so bad. I don’t know if this is what Wood and Kelly were intending, but it’s an interesting idea, and it might be one to explore further.

So, yeah, this was a damn good issue. Let’s bring it home big next time, boys! (and not too late, I hope.)