Perla La Loca: No pictures means I actually have to talk about why this book is good

I'm still without scanning equipment, so we'll see how this goes. In the meantime, I've also got a review of Sky Doll #1 up at Comics Bulletin. 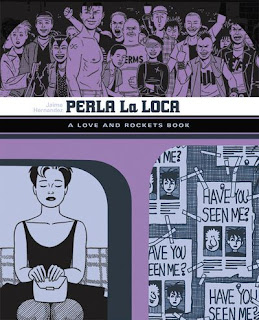 It's kind of difficult to know what exactly to talk about with this volume, since just repeating "it's excellent" over and over would be boring and pointless. But Jaime Hernandez is such a good artist and storyteller, he makes the creation of his compelling, enjoyable stories seem effortless. I find myself irresistibly drawn to follow his characters' lives, but I struggle to explain why.

Maybe it's the way Jaime has built a sprawling cast that extends well beyond the main duo of Maggie and Hopey, and while they all have stories and character development, it feels like a living, breathing world that could provide stories in perpetuity. While some strange, out-of-the-ordinary things happen (although much less so than in earlier volumes; no dinosaurs or rockets here), the characters seem so real, as if they're living their own lives, whether we get to see them or not. They grow and change, and often the relationships and developments are messy; as in real life, sometimes things go unresolved, rather than getting wrapped up neatly.

It's fascinating to see everything work together, and keep working; by the end of this volume, the stories had been progressing for something like fifteen years, basically in real time, and the characters kept changing as time progressed. You can see the years on Maggie and Hopey's face; they're not the same young girls that they were at the beginning, and this is only emphasized by occasional flashbacks. And all that accumulated story informs us as to their characters, making them feel all the more whole and three-dimensional. But not obviously so; they're just people living their lives, and through all this time we've spent with them, they seem like friends to us. Again, it's masterful work by Jaime, and a large part of what makes me want to just keep going on about how great he is.

As for the stories here, they're pretty far-ranging and full of details and events. Well over a third of the book is taken up by a long graphic novel called "Wigwam Bam", in which we see what happens to Maggie and Hopey after they reunited in the previous volume. But apparently they weren't ready to be together yet, since what seems like a petty argument splits them up again, leaving Hopey to survive on her own among an east coast society of artistic lesbian types and a Lucille Ball-like comedienne with a fetish for underage girls. Meanwhile, back in Hoppers, Ray and Danita are having problems with their relationship, Danita begins working as a stripper, and Doyle gets mixed up with a rather forward teenage girl. And then there's the issue of Hopey's picture, which keeps showing up on the "missing persons" section of milk cartons. The issue of whether this is a prank and who pulled it is an ongoing one throughout the story, and it eventually drives Izzy to go on a cross-country trip, first to avoid the nagging thought of Maggie and Hopey, and then to eventually try to find them. (Amusingly, the identity of the milk carton prankster isn't revealed until a later story). And then there's an amazing section in which Izzy obtains Maggie's teenage diary, and we get to see some of her past and learn where she came from; it's beautiful stuff.

But as a whole, "Wigwam Bam" isn't very cohesive; it's an example of the sprawling, ragged storytelling I was talking about, checking in on the various members of the "Locas" crew, filling in history with flashbacks, inching characters in different directions. It's certainly not a "beginning, middle, and end" sort of story, like "The Death of Speedy". Instead, it almost seems like Jaime wasn't sure where to go with the various characters, so he just noodled around for a while, popping in on, say, Ray for a while so we can see him struggle with his failed relationship with Maggie, then jumping back to spend some time with Hopey and the deviant world of the rich and famous. Not that I'm complaining, since it's all compelling stuff, and I can't get enough of any of the characters.

When it's all through, the main accomplishment of "Wigwam Bam" seems to be to get Hopey moving again, instead of holing up in a society that views her as a cute plaything. An ugly turn of events sends her back on the road with a band, and while she considers going back home to Hoppers, it's not the same place anymore, and she doesn't really fit in, at least not without Maggie. So you know she's going to have to search for her old soulmate, and we're going to end up having another reunion.

That comes later though; instead, we spend much of the rest of the book following Maggie's adventures in small-town Texas as she develops a closer relationship with her younger sister Esther, reconnects with her father and his family, and comes to terms with who she is. Of course, this involves starting a feud with a prostitute at a small strip-mall restaurant and hotel, fending off the advances of a lesbian wrestler, and eventually getting involved in some of Rena Titañon's business with the mob. Again, it's some great storytelling, whether it's Maggie hanging out in a hotel room and discussing (gay) guys with her sister, or her encounters with various wrestling types (she also hangs out in her aunt Vicki's training camp), or her adoption of Danita, who moves in with her after having a scary encounter with a stalker.

Eventually, everything comes to a head when she fools a bunch of people into thinking she's getting married just to get them off her back, and then considers a relationship with El Diablo Blanco, a masked wrestler who happens to be Rena Titañon's brother. This all ends badly for her, of course, and it coincides with Hopey trying to reconnect with her, which happens just as Maggie gets slapped in the street by an old lady (because she thought she was a whore...oh, just read the story to get the whole explanation). This is followed by two pages of Maggie imagining being slapped by pretty much everybody she has ever known, and it's hard to watch; her self-esteem has sunk pretty damn low. And then, in an even more heartbreaking scene, she passes out and imagines what would have happened if she had gone on tour with Hopey and her band (back in the previous volume) instead of staying at home. And, of course, it's joyful and great, as if that was the turning point for everything bad that ever happened to her. That's the way our minds work, with us thinking that one small decision might have made everything turn out differently, but of course that's not going to be the way life works. Still, it's hard to watch somebody you love go through tough times.

But all is not lost, since Hopey managed to witness everything, and she and Maggie reunite, on the last page of the volume. Damn, that Jaime knows how to end a book. I know these stories are continued in the second volume of Love and Rockets, and other related graphic novels, but I still feel that need to know what will happen next. It's not exactly a cliffhanger, but it's a stopping point, and I can't wait to go on to the starting point of what's next.

I don't know if all this has made any sense to anybody besides me, but it's good to get something down about why I find this series so affecting. I really feel that Jaime Hernandez is one of the greatest cartoonists of all time, and these stories are a great demonstration of why that is. I highly recommend them to anybody who wants to read great stories about real-feeling, three-dimensional characters, whether it's in comics form or not.
-----

Wow, that was kind of long, wasn't it. And I didn't even include any images. But there are some great pictures in here, so I'll probably follow up with an image post about the book when I get a working scanner. Watch for it!

UPDATE: That image-centric post is up, so go here to read a bunch more of what I have to say, whether it makes much sense or not.
Posted by Unknown at 10:33 PM