Shojo Beat: This might be too much analysis for my own good

I don't know how long this is going to be, since I've sat on this for too long after finishing it. I blame the lack of scanning equipment (anybody who is sick of me whining about that can forego telling me to shut up already; I've annoyed myself with it enough to get the message). Anyway, here we go: 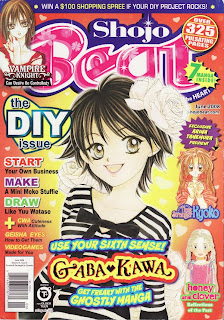 Doing crafts and shit is the non-comics theme of this issue. Since I'm not a very crafty person, most of it doesn't interest me, but maybe I'll try to get my wife to make the little plush versions of the panda bear mascot that feature in one article. For, um, my daughter, not me. Okay, on to the manga:

This month's preview series is yet another Arina Tanemura manga. Viz really wants her to be a superstar, don't they. While she's still not a favorite of mine, I think I'm warming up to her, and her gigantic-eyed style isn't bothering me as much, perhaps just through all the exposure I've had to it over the last several issues. As for this series, it's one of those "princess must learn to relate with the common people" series. That's a genre, right? I was disappointed to find that it's not about time travel; instead, it's about Kyoko, princess of planet-wide Earth Nation at some point in the future, who has been passing for a common person in order to go to a regular high school. Her sixteenth birthday is coming up, and she is supposed to present herself to the populace in order to be honored, but that would blow her cover. We get the hints of a "magical quest" type of story when she finds out that she has a twin sister who has been asleep for her whole life, and the only way to wake her is to gather a bunch of "god stones" from across the planet. So she sets to doing it, but the whole thing gets derailed when she has to expose her magical princess powers to her classmates anyway. It's an odd scene, in which marauders attack the school, and she and her bodyguards (two cute guys, providing the requisite eye candy) defeat them. In an incredibly bizarre bit, a bad guy shoots an arrow at her, and she somehow summons a flying pig-lizard (?) to intercept it: 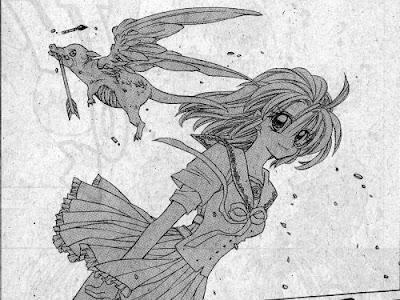 Yeah, I don't know what happened there either, but it's so weird, I at least cracked a smile. So anyway, her secret exposed, she decides to continue her quest anyway, so she can wake up her sister and get to know her. So that'll be the rest of the series, I guess. Strange, and not really for me, but I'm starting to see the positives of Tanemura's style, with its goofy comedy and determination. Wait, isn't that every shojo manga?

Well, this series is more than half over, and I'm wondering why it ends so soon, since it seems to have plenty of elements in place to run for a while. In addition to the mischievous lead character, there's at least two other demons that can add rivalries and plot complications, two cute guys who we learn in this issue have psychic powers, and now, a ghost who wants to get in Rara's pants. That's right, this chapter introduces a dead guy who got lost finding his way to the afterlife, and he wants to become a demon by having sex with Rara (or "getting freaky", as the cover so loudly trumpets; go teen sex!). There's an interesting plot point for you, especially since he offers to possess the body of Retsu, the boy Rara likes. We also see Rara possibly get found out as a demon, but that's a cliffhanger that won't be resolved until next time. Hey, it's enjoyable stuff, but I'll be fine with another series taking its place when it ends.

Nothing of much interest this chapter. A human girl gets bit by a vampire, Zero gets blamed, everybody sits around and talks about politics, Zero and Yuki angst about their feelings for each other. There's also a development in which a group of vampire students who are appointed to find the culprit. That could lead to something interesting, but for now, it's a typically boring mid-story-arc chapter in which nothing much of consequence happens. Yawn.

Other than the romantic ending of the chapter (which I won't spoil), this is another series with kind of a filler story this month. After the big game, Nobara and company celebrate, and then she and her fellow students head home on the train. There are some good moments though, like the drunken antics of the Eagles: 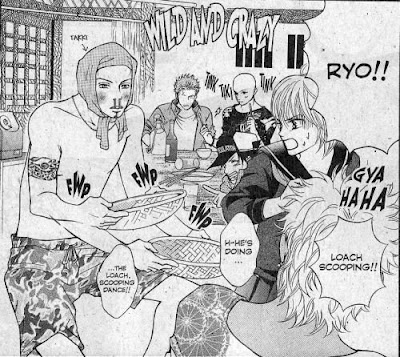 Or a bit in which Mr. Zaki, the middle-aged member of the Eagles, sings some songs that he composed for Nobara, causing everybody except her to writhe in agony. But that's about it. I'm sure the drama will begin again next month.

It seems like I'm always praising this series, and this month is no exception. Ann has returned home to Tokyo, and she's back to the long distance relationship with Daigo, while still being pissed off at Fuji for kissing her, then claiming it was just a joke. So even though she has been friends with him for years, she feels like she has to push him away to keep him from threatening her relationship with Daigo. But, as someone remarks, he's kind of like her mother; will inflicting emotional pain cause him to get depressed and suicidal? His quitting school doesn't seem like a good sign...

In other events (and what's really the "A" story of the chapter), Daigo bonds with Fuji's sister Shika, who has been raised as a sheltered rich kid by her mom and doesn't have too many friends. But she just found out that she's a bastard child, so her world is kind of in chaos. Daigo, seeing her as sort of a little sister, takes her under his wing and gets her to help some of his friends who are working on building a shrine. It's nice to see her feel fulfilled, having relationships with other kids instead of stuck in her house studying the ponderous rituals of the aristocracy. Like every month, it's a good slice-of-life story; we'll see if more of the harsh drama emerges next month.

I don't know what is is about this month's chapters of my favorite Shojo Beat series, but it's prompted me to do an examination of Hagu, and the quasi-moe stereotype she falls into. I don't know if I'm fully up on the exact specifics of moe (and I'm not sure if the idea really even translates from Japanese very well), but it seems to be a fetishization of a particularly submissive, cute, childlike type of girl. Well, Umino has taken the idea and examined it, looking at what that type of character might really be like. In this case, Hagu is fully grown (she turns 20 in this chapter), but she still has the appearance of a child. She's pretty quiet and withdrawn, but at least two guys are interested in her, but for different reasons. Takemoto, the closest thing the series has to a main character, seems to like her as a person, admiring her creativity and personality, and actually attempting to bond with her. On the other hand Morita seems to view her as more of a moe object, treating her, as I've heard the moe trope described, as a pet. He's more interested in the cuteness aspect, and almost doesn't even view her as human. Interestingly, he seems to be the one winning the contest for her heart at the moment, but that's because he's actually beginning to view her as more than a mascot, and it surprises him. In fact, this leads to my favorite moment from this month, when a regular teasing session turns into something more: 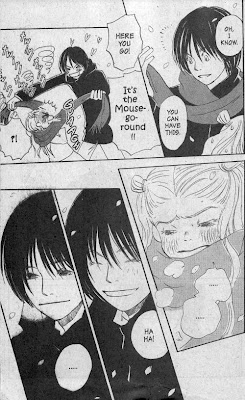 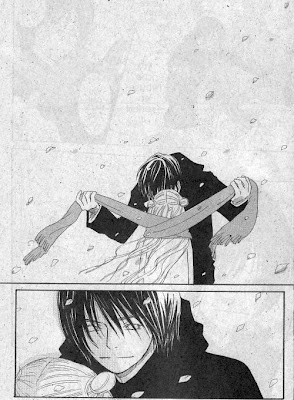 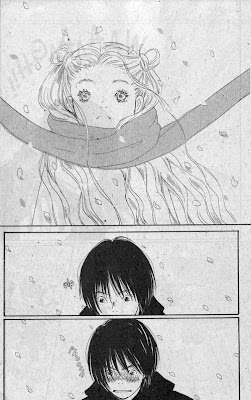 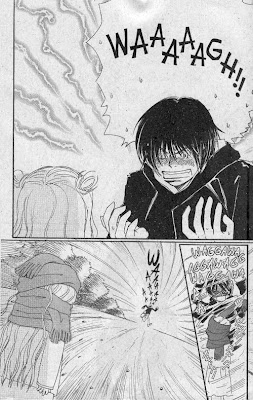 Oh man, that's hilarious. But another interesting aspect of the moe type is the forced youth. Umino seems to see this as tragic, as we see that Hagu is still basically a child, clinging to her "older brother", Professor Hanamoto, well past the age in which she should do so. It's not healthy; why would we want a person to be like this? Why would we wish stunted development and impaired personality on someone we aspire to love? That seems to be the question here, and I'm interested to see where Umino goes with it.

There's plenty of other stuff that goes on this month, but I've gone on enough already. Suffice to say it's a great read, as always. It's the highlight of the magazine for me each month, and I can't get enough of this groups goofy antics and sweet romances. Even just seeing them hang out together is pleasant and enjoyable. That's good comics, I say.
-----

And it looks like that's it for the month. I'll have to get this done sooner next time; I might be able to come up with more to talk about. Since it's not like I don't go on and on enough already, right?

Oh, and if I've misinterpreted the whole moe thing (which is probable), feel free to correct me in the comments. Tell me why it's good to lust after the childlike girls!
Posted by Unknown at 8:42 PM