I now have a working scanner, so it's time to go to the other half of what I talk about when I review comics: the art! I already went on at length in coverage of this book, but prepare for more blatherings about stuff that I liked about it. So here's more about: 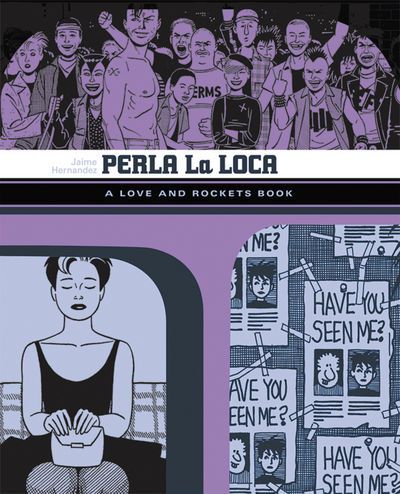 As with the previous look at this book, it can be somewhat difficult to know where to start when talking about the art, since Jaime has been delivering excellence since the beginning. But you gotta start somewhere, so why not go with one of his most celebrated skills: drawing pretty women: 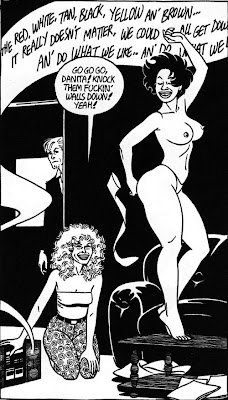 Since a fair portion of the early part of the book takes place in a strip club, it's easy to choose the rampant nudity. But while it's enjoyable, it's not completely gratuitous; in that image, for instance, you can see the pleasure on Danita's face as she dances. While she's nervous about the idea of showing off her body in front of strange men, it still excites her, she finds it enjoyable, and she obviously loves to dance. And Jaime doesn't just explain away her objectionable line of work like some would; he explores some of the more unsavory aspects of it, like in this scene in which she kind of freaks out about all the weirdos ogling her:

The fact that one of them ends up stalking her weighs into the equation as well. And then there's scenes like this, in which Danita's sister objects to a painting Ray made of her: While that sentiment fits as part of the story, it also works as a bit of self-criticism from Jaime. Is he degrading her by portraying her nude, ready to be drooled over by readers? Is he just one of those dudes in the audience, staring at her tits? I dunno if he really comes to a conclusion in the matter (although the nudie bar does get closed down), but he is willing to consider the issue, rather than just explain things away and cater to his (and the readers, if they're so inclined) groin area.

But Jaime is still pretty good at teasing us that way, and still adding a bit of comedy or drama, making the scene work as part of the larger story. Take this scene of Maggie, for instance:

She saw some guys looking at her, and she pretends to be all sexy and sultry, but it doesn't fit, and she jumps like a scared rabbit when startled. It's pretty funny, in the middle of a story that combines that comedy, drama, and character advancement.

I think the thing that strikes me about Jaime's art (and storytelling in general) is how varied it is, not sticking to any single motif or style for too long. We get slapstick comedy and genuine emotion. We get action, both realistic and comic-booky. We get weird dream sequences, or noir visions. There are stories where characters sit around and talk, and others that are dialogue-free, in which we only see people's actions. There's cute kids and their antics, right alongside harsh violence and explicit sexuality. It's enough that we never get bored, and each story is an opportunity for Jaime to surprise us, demonstrating his skill and filling in more of the lives of his characters.

Still, there are a few other bits that I want to point out, like this amusing scene in which Hopey gets to see Nan, the aging comedienne, act out on her child-rearing fetish: 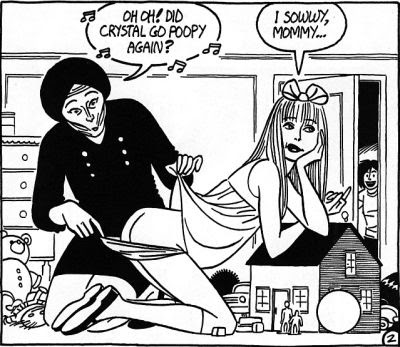 That one cracks me up, probably because we had gotten to know the blonde girl as an adult who just does this for a job. That makes her ho-hum expression and subtle display of her middle finger especially amusing. I also liked this scene, in which a bunch of Nan's fetish-sharing friends come over and bring along their charges:

It's an example of the type of scene that Jaime does so well, presenting a tableau of activity, full of unique characters who all stand out. It's not easy to pull off, but Jaime makes it look like it is.

Other cool stuff: the scenes from Maggie's diary, in which we get to see some of her childhood: 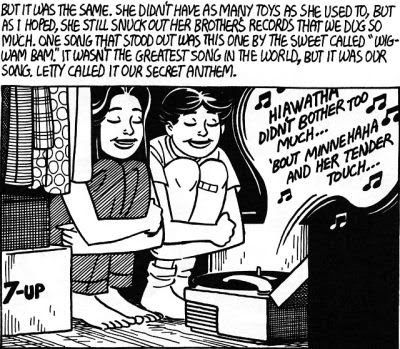 They're all pretty fascinating, but this one stood out, with its true-to-life quality and almost voyeuristic peek into somebody's real-seeming life.

Finally, there's the "slapping scene" I spoke of, in which Maggie imagines being slapped by pretty much everyone she's ever known. Here's the first page (of two): 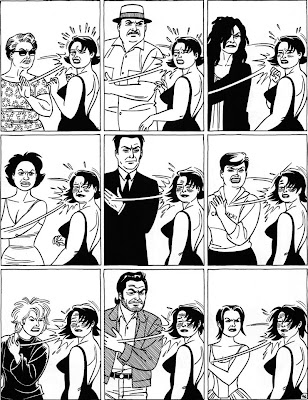 Damn, that's a harsh sequence. Maggie's self-loathing has sunk to a state in which she imagines that all these people she knows and/or loves just hate her, and as it goes on, you can see her expression progress from surprise, to pain with a little anger, to sadness and almost acceptance. By the end of the second page, she's almost beyond feeling, just taking it with her head bowed, and that's when the worst comes: 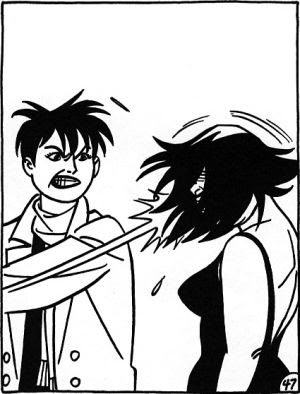 That's the last person she (or us) would ever want to slap her, and it's horrible to watch, even if it is only a fantasy.

See? That's how good Jaime Hernandez is: he breaks our hearts even when showing us stuff that doesn't actually happen. Damn, there's probably plenty more I could talk about, but I'll stop there. I don't think I'll ever be able to get enough of this stuff. Jaime is okay in my book.
Posted by Unknown at 8:55 PM