Crap, I had this post all ready to go the other day, and then my scanner crapped out on me, so it looks like I'm going to have to do it the old-fashioned way and use my words. I hope it still works.

Also, I've got a review of House of Mystery #1 up at Comics Bulletin, where I actually intended to not scan anything. So you can read that and enjoy its non-disjointed nature. 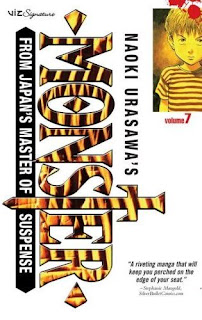 This volume kicks off with a chapter that demonstrates something Naoki Urasawa does so well on the series: establishing characters quickly and making the reader care about them. In this case, we are introduced (although we might have met him briefly at the end of the previous volume) to Richard Brown, an ex-cop private detective who is investigating the "suicide" of a student we saw in volume 6. Urasawa quickly establishes that he's a recovering alcoholic who is divorced and wants nothing more than clean up his life and be able to see his young daughter. In a brilliantly-timed sequence, centered mostly on one double-page spread, we see him receive some bad news and begin to succumb to his old impulses.

First, we see Richard's ex-wife exiting the bar, with a view of his grim expression that gets cut off by the edge of the panel. Then there are two identical panels of Richard from behind, showing his motionlessness as he battles with his emotions. The next tier of panels shows some guys drinking on the bar, with the second panel (of two) giving a closer, zoomed-in view of the drinks they are drinking. This is followed by a panel of Richard's eyes; there's no doubt as to what he's looking at and thinking about. Another panel of a drink being downed is followed by a close-up of Richard's Adam's apple, accompanied by a "gulp" sound effect. Then, the page ending panel shows Richard's hand raise, shakingly, as he calls for the waitress.

On the next page, the waitress asks what he wants, and over two panels, we see a closeup of first his mouth, then his whole face, as he grimly says, "Wh--whiskey". She returns to the bar to get his order, and we see a silent panel of Richard, waiting, clenching his fists in anticipation. Then she puts the drink down in front of him, and we get a panel of Richard looking down at the drink, which is centered in the foreground of the panel. Finally, there's a close-up of his eyes, and a page-ending panel of his hand reaching toward the glass tremblingly.

(Note: after I was able to obtain a working scanner, I've since scanned the pages and posted them here. Now you can see the actual excellent art instead of my poor description of it.)

Urasawa gives us all the information so perfectly (especially through the subtle facial expressions) that we understand exactly what is going through Richard's mind during this whole sequence. It's as tense as any of the violence in the series, leaving readers (or at least me) shaken, suppressing the urge to yell at him not to do it.

So like many of the incidental characters in the series, Richard makes a good protagonist for his storyline. But he ends up going against Johan, so we know he's doomed; we only have to watch and see how it happens. And it's pretty satisfying to watch as it plays out. As Richard edges closer to the truth about Johan (who, as we see, is enacting a long-running scheme to get close to a man who controls much of the finances of Germany) and Johan becomes aware of him (or maybe he knew about him all along; he has seemed to be near-omniscient thus far), we learn more about Richard's disgrace and the demons he keeps at bay. The end result becomes obvious, and we edge closer and closer to the morbid result, being pulled along unwillingly. Man, that Urasawa is a sadistic bastard.

But he's damn good at what he does. For the past six volumes, it seemed that Urasawa was setting himself up for a disappointment. We had seen the results of Johan's schemes secondhand, and it seemed that he had almost supernatural powers of persuasion, brainwashing people to do his bidding or convincing people to commit horrible crimes. But now that we've caught up with him, we see his manipulations directly, right there on the page, as he starts to mess with Richard's mind and push him toward an awful end, and it's totally convincing. I didn't know if Urasawa would be able to pull it off, but he ably rose to the task, making us believe in Johan's genius and cold, calculating nature.

After that story comes to an abrupt end, our ostensible hero, Dr. Tenma, shows up, ready to finally confront Johan. It should be interesting to see where this goes, since this is the closest we've seen Tenma get to his target, and we've also seen how Johan has set himself up in his position of power, and Tenma is threatening all of it. I doubt Urasawa will simply have them relocate and continue business as usual; he'll surely add something interesting to the equation. Will Tenma disrupt Johan's operations enough to put him on the run? Will Johan strike back and manipulate Tenma into doing his bidding? Who will live? Who will die? Damn, I'm gonna have to get the next volume ASAP.
Posted by Unknown at 10:19 PM