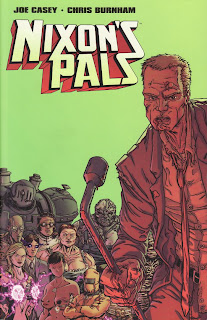 Joe Casey seems to do a lot of work in the superhero genre, but he often comes up with some pretty unique, imaginative takes on it, from the existential, postmodern, whatever-the-fuck-was-going-on Automatic Kafka; to the high school drama of The Intimates; to the cosmic, Jack Kirby-inspired craziness of Godland; and even to the “The Thing’s condition as a disease expressing inner emotion” of Rock Bottom (and others besides, like Wildcats 3.0’s take on corporate superheroes). In a stagnant superhero market where the most innovative ideas usually involve adding more violence and rape, it’s always good to see what Casey comes up with next, even if his ideas have little chance of catching on with anybody else.

So what’s the big idea with this book? That would be mixing superhero tropes (or, more accurately, super-powered tropes, since there aren’t any actual heroes in the book) with noir-style storytelling and crime fiction. The book features one Nixon Cooper, a parole officer for supervillains who gets mixed up in dangerous business when he gets too close and emotionally involved with his charges. At the same time as his professional life is in upheaval, his personal life seems to be falling down around him with the discovery that his wife is cheating on him, with a supervillian, of all people.

It makes for a nice bit crime-fiction, and one of the highlights of the book is Chris Burnham's moody black and white art. He pulls off the combination of weird superpowers and gloomy shadows really well; it's a mix that I don't see very often, but it actually works really well here, highlighting the bizarre nature of the varied cast by portraying them as a sort of seedy underworld of crooks and gangsters. He also adds a gritty, dirty touch that emphasizes the street-level nature of the story.

And the great character design helps immensely. Casey and Burnham come up with a diverse array of weirdos, and they all seem to have personalities and histories, from Alchema, the stripper with faces on her breasts (and nipples on her face):

To Maxfield Reactor, the scientist trapped within bulky armor: 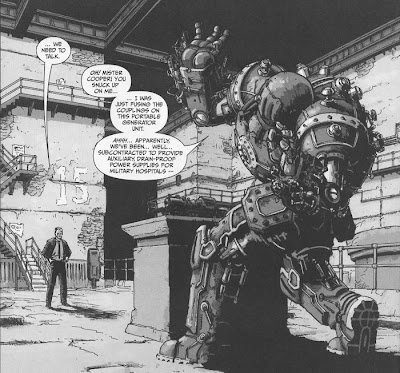 Or my personal favorite, a mobster named Rambles whose face seems to have been twisted around his skull in a disturbing fashion: 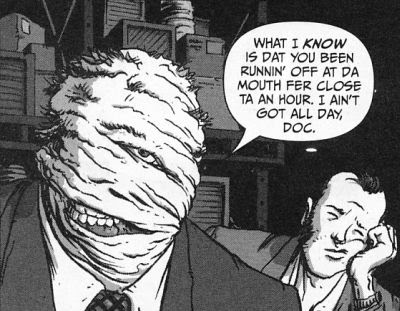 In fact, not to spoil anything, but a climactic scene sees the reveal of a huge array of freakish characters, and it's a stunning image, crammed full of detail on characters that only make tiny appearances, but seem fully-realized, just by the personality that Burnham imbues in them.

In another wrinkle, a subplot of the story has Nixon experiencing freaky nightmares in which he is being captured by aliens and dissected. Again, Burnham delivers here, making these scenes horrific and nasty. Here's a brief sample, but rest assured that this is pretty tame compared to the images surrounding it:

It's viscerally disturbing stuff, the kind of body horror that triggers almost subconscious revulsion, and it leads up to a final powerful and lasting image. Wow.

Oddly, this does kind of highlight one aspect of the book that bothered me, which is Nixon's seeming resistance to injury. He's meant to stand out as a contrast to all the freaks he has to deal with, but over the course of the story, he takes quite a bit of abuse, almost without feeling it. Sure, he ends up in the hospital, but considering the brutal beatings he receives, it's amazing he doesn't end up dead with a crushed head or exploded heart or something. Instead, he seems to come out of it with only a broken arm and some ugly stitches on his face.

But I suppose that's nothing too terrible to hold against the story. In actuality, while the plot works well enough, I particularly liked some of the smaller relationship elements that factored into the main plot. For one, there's Nixon's antagonistic marriage, which dissolves after he discovers her infidelity. But it's a realistic depiction of a married couple, and we see how they still care for each other even though they've hurt each other too much to remain together. It would have been easy to simply have them hate each other and be glad to get rid of some dead weight, but instead, Casey gives them that bit of humanity that helps us relate and adds a human touch to the fantastical trappings of the rest of the book.

And in the professional realm, Nixon has a touching relationship with one of his charges, a genetically-enhanced professional killer named Sputter Kane. In what might be a commentary about the ease of recidivism for ex-convicts, he is trying to go straight, but the money and allure of a criminal lifestyle seems like it might be too hard to give up. It ends up being one of the central conflicts of the book, as Nixon tries to save him from falling back into the lifestyle he once led. Again, even though the setting is fantastical, this bit of character development adds enough realism for us to relate, giving an emotional focus to a story that could be all surface. Nicely done.

So, yeah, if this sounds like something you might dig, I heartily recommend it. Casey continues to stretch and come up with new ideas while still retaining a human core, and I expect to keep reading the comics he writes.
Posted by Unknown at 7:04 PM