Shojo Beat: It's not often that I have so little to say

Crap, maybe I waited too long to start writing this up, but I don't feel like I have much to say about this issue. So bear with me, I hope it doesn't get boring. In the meantime, I also have a review of Pigeons From Hell #1 up as part of Comics Bulletin's Sunday Slugfest. 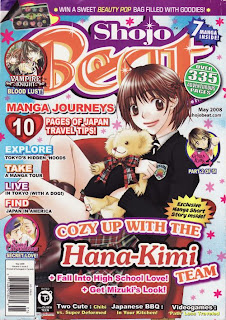 This issue's articles are all about traveling to Japan, which is kind of interesting, but fairly lightweight, as per usual for the magazine. There's some good stuff about regions to visit outside of Tokyo though. So anyway, on to the various manga content:

I've never read this series about a girl who infiltrates an all-boys school to get close to the guy she likes, so this story might be more interesting to someone who has actually followed that manga. It's kind of an alternate look at the series, from the point of view of one of the minor (I think) characters. That would be Kayashima, a psychic guy who immediately identifies the protagonist as a girl, but keeps the knowledge to himself. I dunno, it's nice enough and all, but nothing that makes me want to run out and buy all the volumes of the series. If anyone has read it, is it very good? Not that I expect I'll ever get to it, but it seems like it could go either way. So, yeah, if you're a fan of the series, you might like this story. Otherwise, eh, whatever.

Even though I generally like this series, I don't have much to say about this month's chapter. It consists of the volleyball match that began last month, but while it's nicely done, it's not as exciting as I had hoped it would be. The action is given in a sort of montage style, showing us key plays here and there, but without the exciting, moment-by-moment action that I would prefer. Of course, that approach would take several times as long to tell, and Takanashi is probably saving that sort of thing for a match with Nobara's actual team, rather than her adopted training squad. But it works okay here. There were two moments that I thought were especially well-done though. In one, Nobara's love interest Yushin, who showed up unexpectedly last issue and began to realize his feelings for her, gets overcome by feeling for her and steps out of the gym for a breather. Nobara notices, but it doesn't affect her playing, which was a nice sidestep of the cliche in which a character lets their personal life get in the way of their playing, only to recover when the boyfriend returns and offers support or whatever.

The other moment (which demonstrates how much reading all this shojo manga has increased my level of girliness) takes place during Yushin's reverie, as he realizes how much he missed Nobara: 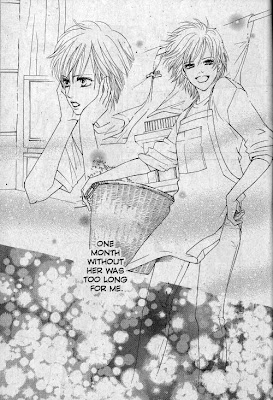 Ah, how cute and charming! Okay, that's enough for me.

Silly comedy seems to be the order of the day in this series. This second chapter (of only five) sees demon protagonist Rara start to follow her wannabe boyfriend Aku around like a puppy dog, trying to get in his good graces. In the most amusing bit, she hears a rumor that he's gay (and also that he was abducted by aliens, but she doesn't act on that one), so she dresses in a boy's uniform, hoping that she'll still be able to please him. There's plenty of other silliness (including the appearance of pants-wetting), but I just can't get over how ridiculous Aku looks, with his little beaded pigtail: 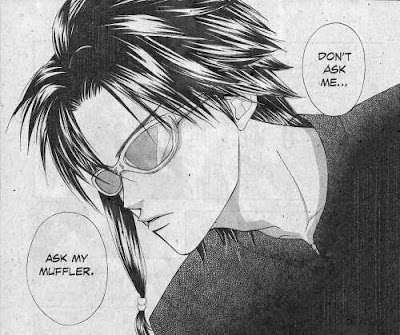 By the way, in that panel, he's responding to a request by a teacher to do something about his loud motorcycle. Take that, authority!

So, yeah, the series is cute, and Takada's art is pretty nice. She seems to rely on super-deformity a bit less this time around, which makes me happy; I think I might have a low tolerance level for that sort of thing. No complaints here, but no real accolades either. Three more chapters of this seems about right.

This is another series about which I have little to say this month. There's some intrigue about vampire politics, and what seems to be the beginning of a subplot about a vampire named Aido fleeing from the vampire dorm and taking refuge with Yuki for some reason, but none of it interests me that much. Really, the only thing of note is stuff like this, in a scene where Zero licks the blood off Yuki's finger after she cuts it on a broken plate: 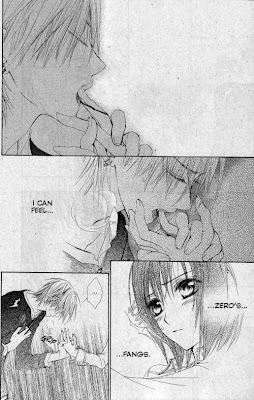 It's so weird seeing such sexual imagery in a series for teens. The continued sublimated desire between these two characters is one of the more interesting aspects of the series, so it's usually what I pay attention to when the other plots bore me. Let's see more of that. Crap, am I turning into a dirty old man?

Surprisingly, I don't have much to say about this series either; that's strange, since it usually provides me with plenty to rave about. But it's "just" another nice chapter, with some good moments of our characters interacting and contemplating nature and their emotional lives and stuff like that, as they participate in trying to save the small shopping district where Ayu's family's liquor store is located, have a Christmas party, and go hang out at an amusement park together. There were a few bits that I especially liked, such as this scene in which Takemoto is helping Ayu and some others on an art project that Hagu is coordinating; he proves invaluable, since he's the only one who understands Hagu's instructions: 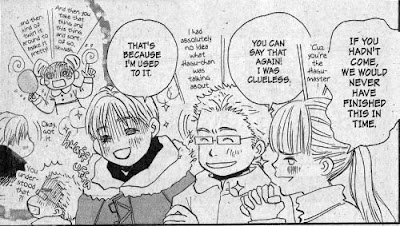 Or this scene between Mayama and Morita: 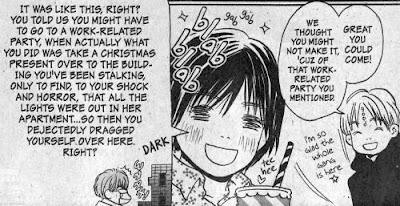 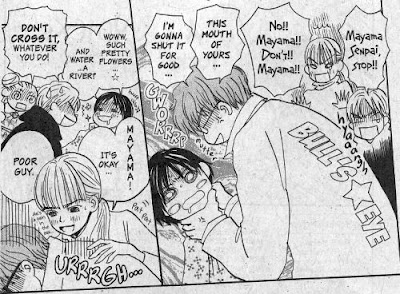 Ah, violence (of both the emotional and physical varieties. Classic. What makes this manga so excellent is just seeing the characters interact. They sort of fell together and formed their own family, as people often do when they embark into their adult life, and it's wonderful to watch Umino build their relationships as they simply participate in everyday activities together. The aforementioned scenes wouldn't normally be anything to write home about, but Umino has built these characters and developed their relationships to the point that there's an added layer of emotion and history to them, so that it's like spending time with friends or family as you read them. I love it; I hope this series goes on forever.

Oh, snap. I thought the days of high drama were over for this series, but with this chapter, Ashihara blindsides us with a twist involving Fuji and his sister Shika that seems obvious in retrospect. It's been a masterful bit of misdirection, and I'm eagerly awaiting/dreading the consequences. But I won't spoil it, so if you're reading the series in collections, watch for the big drama somewhere in the third volume (I think).

In other, less dramatic, events, Ann and Daigo get into a fight after he finds out that Fuji kissed her. Ah, now this seems more like the usual shojo drama. But Ashihara does such a good job with the characters, it's great to see them deal with the emotions that come from being so close to someone: 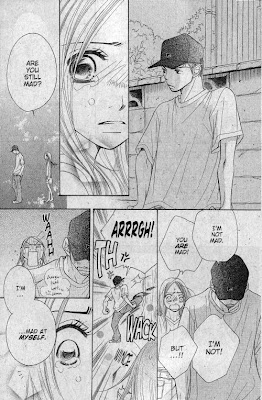 Ah, teenage love. And not to spoil anything else here, but this leads to a pretty big moment that's tenderly done, if kind of icky (in the "I'm a dirty old man" sense). It still weirds me out to read such forthright depictions of teen sexuality, but it's so well done, I can't complain. Better to acknowledge the elephant in the room than pretend it doesn't exist, right?

So, yeah, like I say every month, this is another good chapter in an excellent series. I'm not sure how long the series will continue, but I trust Ashihara to keep telling damn good stories with her characters. I know I'll keep reading them.
-----

I guess that's it. I hope that wasn't too boring. Maybe next month I'll be more excited. In the meantime, I should have something else up soon. I hope. God, I'm so unreliable...
Posted by Unknown at 7:22 PM