Golgo 13: Starting at the end isn't too bad here

Damn, I'm behind again. Let's try to get caught up. 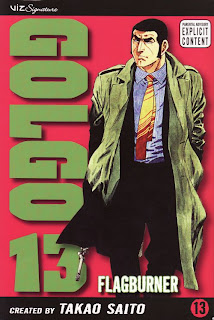 I've been wanting to read some or all of this series, but the final volume is a weird place to start, isn't it? Well, I'm not too picky when it comes to books that I get sent for free. Thanks, Viz! Luckily, the entire 40-year-old series consists of done-in-one stories with little in the way of continuity, so the previous twelve volumes aren't necessary. And I've read plenty about it, especially Jog's excellent series of reviews of the series, so I have some familiarity with the regular tropes and ideas.

And that familiarity is nice, if not especially necessary here, since the main story in this volume ("The Serizawa Family Murders", from 1975) isn't a normal one of the eponymous super-assassin's jobs, but rather an origin story (although it's not the definitive one; editor Carl Horn states in his backmatter essay that this is only one of several origins that have been told over the years) that gives us a possible beginning for the character. It ends up being a pretty compelling tale, starting in post-WWII Japan when nearly all the members of a well-to-do family are murdered, leaving only a young daughter and an elderly maidservant, who leave the country soon afterward, and a young son, who was found at the murder scene. We follow two policemen over the next 30 years, as they continue to be baffled by the lack of clues. Fifteen years after the murder, when the statute of limitations has ended, the daughter reappears to confront her brother (who, in the meantime, is being raised by a marksmanship trainer), only to somehow disappear without a trace. One of the two policemen manages to leave the events behind and go on with his life, but the other becomes obsessed, quitting his job and pursuing the truth at the cost of his personal life and maybe even his sanity. He eventually presents a possible solution, in a compelling (and disgustingly descriptive) climax, believing that the boy has grown up to be Golgo 13. And then there's an awesomely ambiguous ending; will we ever know the truth about Golgo's origins (the safe money is on "no").

But while the story itself is compelling, a lot of what makes the story interesting is the moody artwork. Several chapters from the various time periods begin with realism-adding montages depicting the violence and darkness of the era. Here's one from the post-war period: 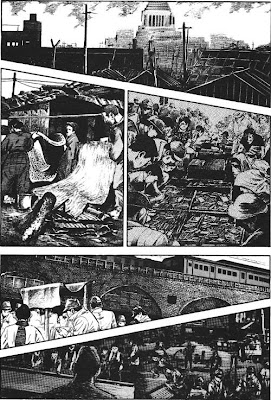 The scene-setting background art and exteriors are also appropriately dark and gloomy: 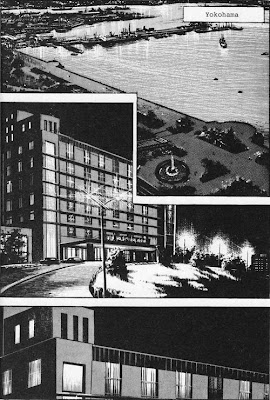 But the character art, on the other hand, is kind of rough and somewhat simplistic, only using a small range of expression: 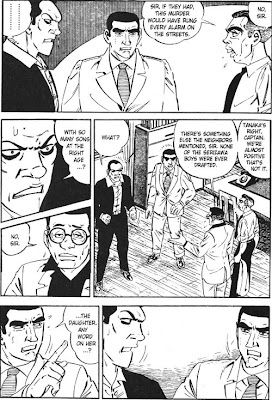 But it actually works very well, limiting the emotions to the necessary surprise, shock, anger, grim determination, and unhappiness.

The other thing that seemed really notable about the story was how ellipsis-heavy it is. That manga trope of word or thought balloons filled only with rows of dots has always seemed to me to be a bit of Japanese language/culture that doesn't translate well to the West, and it has never before seemed so strange to me as it does here. I had always thought of it as a bit of blankness of mind, or, when spoken rather than thought, as a kind of reluctance to speak, but it gets used here near constantly, almost always in thought balloons: 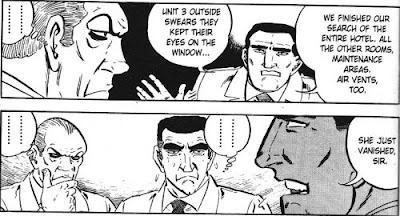 I eventually settled on the meaning of the device as "this character is thinking very hard about the situation, but we're not privy to his thoughts." Once I realized that, the secretly internal nature of the story made sense, but it still seemed amusing when I came across the occasional page which consisted of almost nothing but characters thinking dots at each other. Really, I chalk it up to not being too familiar with manga from the 70s; while the device still shows up in modern manga, it's not nearly as prevalent as it used to be. Or maybe it's just a Golgo 13 thing.

But still, it's a great story, full of suspense and intrigue, and that is only increased by the knowledge of who the character being investigated might or might not become.

The second story ("Flagburner", from 2001) isn't quite as good, but it's an interesting one that I'm glad I read. It's a pretty infamous one, in which our man Golgo gets involved in the Florida election recount of 2000. That sounds goofy enough, but the story ends up being weirdly political for originating outside of the United States. It's got a mixed-up chronology and some other shenanigans, but eventually it comes down to a speech by a recently-retired White House gardener who was disgusted with Bill Clinton, believing that he was an immoral President who didn't really believe in anything and never won the Presidency by a majority of the popular vote. Compared to the previous six Presidents, all of whom were born between 1908 and 1924, he was unfit for office or something. Just look at his crimes: 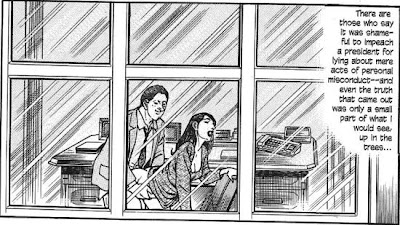 That panel cracks me up. You'd think Slick Willie would have known to close the drapes. So this guy decides to take it upon himself to do what he can to insure that the Presidency won't pass to Clinton's heir, Al Gore; in an especially silly plan, he hires Golgo 13 to shoot a bundle of Gore ballots and render them uncountable. Ah, that makes about as much sense as what actually happened. It's definitely amusing to look back on it now, seeing what has happened in the eight years since. But I do like seeing a look at my own country's politics and current events from the perspective of a different culture. And it never hurts to throw a super-hitman into the mix. Good times.

So, I think I'll definitely need to check out more of these Golgo 13 volumes. This was immensely entertaining, and I want more. Bring it on, Duke Togo!

This review was based on a complimentary copy provided by the publisher.
Posted by Unknown at 10:38 PM