Nana: I'm like a teenage fangirl for this series

Jeez, how embarrassing. It's worth it though. I should mention that I have a review of Anna Mercury #1 up at Comics Bulletin, as part of their Sunday Slugfest from the other day. I was slacking though; I didn't get it in until Monday. That kind of defeats the purpose, doesn't it? Anyway: 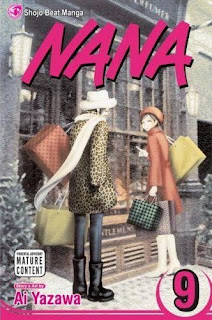 It’s hard to know what to talk about for this volume of Nana, because it’s more of the same excellence we’ve come to expect from the series. Ai Yazawa continues to craft compelling drama, and it’s so good, you feel every emotion right alongside the fascinating characters. I love that she refuses to back down from the big, series-changing twist of the previous volume; we don’t get a cheerful “Nana, now featuring a cute baby!” (you can highlight that previous sentence to reveal some spoiler-laden inviso-text; I don’t want to ruin the series for anyone who hasn’t read through volume 8 yet). Instead, the characters’ actions have real, devastating results, and it’s hard to watch after Yazawa gave us so much time getting to know and love them.

So: this volume kicks off with the announcement that Hachi and Takumi are getting married, which drives a wedge between Nana and Hachi. Oddly, Hachi seems to be acting subservient to Takumi’s wishes, almost giving up her will to him. It’s unclear why she’s doing this, since she doesn’t seem to like him too much, but she also enjoys playing the part of a wife, and maybe she is sacrificing her ideas of love in order to (inviso-text alert!) provide for her child (end inviso-annoyance). I’m a little bothered by her near-complete submission (especially when it comes to sex), but from what I understand, that’s part of Japanese culture, where wives are expected to submit to their husbands, and a submissive woman is considered sexy (if I’ve misrepresented this, I’m sorry. You know I love you, !).

Takumi kind of comes off as the bad guy here, since he’s ruining Hachi’s dreams of love with Nobu, and he also tells Nana to stop spending so much time with Ren to avoid an inter-band scandal. He seems to want to put his band Trapnest (quick aside: I don’t find the name of their band so ridiculous as David Welsh does; this is Japanese music we’re talking about. Don’t they have bands with ridiculous names like L’Arc-En-Ciel or SMAP?) above everything else. But then he ignores his own advice when he fails to realize that his impending nuptials will send their singer, Reira (who, in a bit I found amusing, we discover is named after the Japanese pronunciation of Eric Clapton’s “Layla”) into a spiral of depression. And when he is given the chance to reach out to Reira and comfort her, he chooses to send Reira’s assistant instead. But while he seems focused on his success, he still seems to have real feelings for Hachi, wanting her to be happy. It’s not a black-and-white situation, with Nobu being the heroic love interest and Takumi being the villain who she leaves at the altar in the climactic scene of every romantic comedy movie. Yazawa is putting together something much deeper and more interesting here.

Also interesting (and heartbreaking) is the plot about the relationship between the two Nanas. Each chapter sees them drift farther apart, feeling like they can’t communicate, and it’s so hard to watch. It’s like seeing two friends having a falling out, and even though you know they should just talk to each other, you can’t do anything but watch helplessly. And then there’s Nana’s increasingly distressing mental health issues; it seems like she might be bipolar, or at least struggling with depression. That’s hard to watch too, to the point where I’m almost yelling at the pages for her to get help.

Another highlight of this volume is a 50-page bonus story that flashes back to show the “secret origin” of Trapnest. Yazawa does a great job of showing us the highlights of the formative years of those characters (I especially like her depiction of Ren as a young teen; he’s so cute!) and explaining the tangled relationships of Ren, Takumi, Naoki, Yasu, and Reira. It’s nicely done, throwing a light on the past in order to help us understand their present and future actions and personalities.

So who knows where this is going next, but as you can see, I’ve become very passionate about the characters and their story. That’s the mark of a really good writer (and I haven’t even mentioned the excellent artwork, which continues to shine in this volume as it has in the past); Yazawa has talent to spare, and I can’t wait to read the next volume (and the one after that, and etc.).