In my final post about Jack Kirby's Fourth World Omnibus, volume 2 (which isn't technically about Fourth World Panels, but whatever), I figured I would look at a few of the covers of the comics within. Oddly, I don't find many of these covers to be especially compelling, perhaps due to their strangely flat, two-toned coloring: 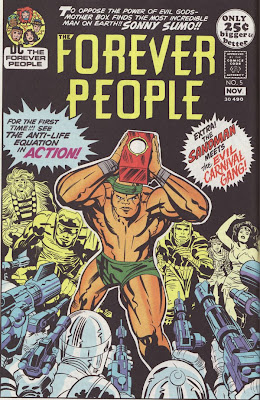 There are at least two other covers in this volume with a similar color scheme (and the stark black background doesn't help on this one either, although now that I look at it again, I notice that it uses an interesting reversal of perspective, with the cool blues in the front and the warmer yellows in the back). Was that something Kirby did on purpose, or was it a decision by DC editorial, or were the covers just an afterthought? Whatever the case, I don't think they do a great job of selling the awesome contents within. There are a few exceptions though, like this sweet Don Rickles piece: 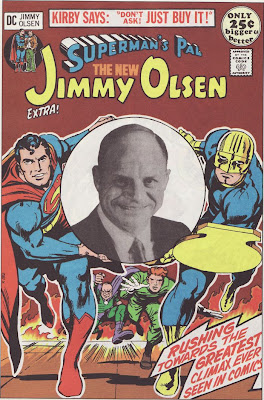 That one's a classic, from the great tagline at the top to the innovative use of a photograph right in the middle, which draws your eyes directly to Rickles' smiling mug. Then there's this kick-ass Mister Miracle image: 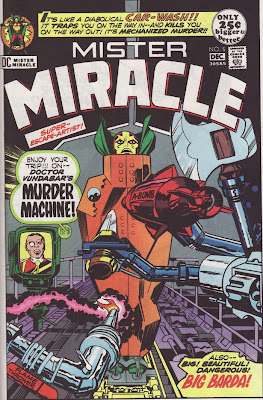 My favorite bit: the "A-bomb" pointed right at him. It's ridiculous to think that it's supposed to be an actual atomic bomb, so I love trying to think of other meanings. Maybe "attack bomb", or "aggravation bomb", or "arsenic bomb". I dunno, I'm weird.

So that's it for the Fourth World, for now. Bring on the next volume (once I can scrape together the funds)!
Posted by Unknown at 10:04 PM