Well, I was right to be excited to read New Gods #6, the famous "Glory Boat" issue. It's definitely one of the best Kirby stories ever, with enough material to write a thesis. You've got big monsters, huge conflicts, clashing ideologies, crazy organic technology (I especially love the contrast between the grotesque, monstrous creations of Apokalips and the shiny, complicated machines of New Genesis), and best of all, the effect of the war between the gods on humanity, stripping them to their base emotions and revealing their true nature, just as large events were doing to people at the time. It's a fascinating look at World War II-vet Kirby's reaction to the Vietnam-era world. And after a huge, glorious conflict, we're left with a devastating final panel, which I've chosen as today's Fourth World panel: 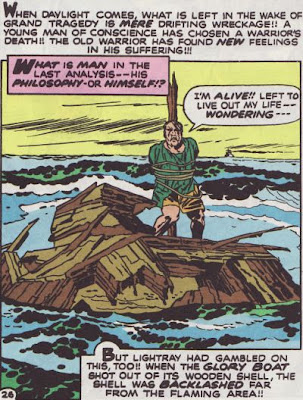 There's plenty of other awesomeness in the issue, including two incredible consecutive splash pages, one of which I've seen several times as an example of Kirby's dynamism. But I'll leave it at this, and urge anyone who digs Kirby to read this story, even if you've read it before. Seriously, it's super-awesome.
Posted by Unknown at 10:22 PM