"The 'Cosmic Carousel!" These young people are as colorful with their language--as with their dress!"

So says the Guardian, a bright-blue-and-yellow-clad guy with weird helmet and giant shield. But that's not the main focus of today's Fourth World Panel, from Superman's Pal, Jimmy Olsen #144: 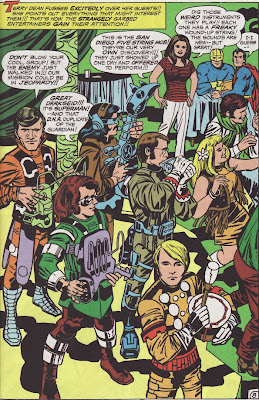 No, instead it's the crazy Kirbytech instruments this band is playing as the entertainment in the Cosmic Carousel, a disco that Superman and Guardian get invited to hang out in. Apparently, it's some sort of trap, and the band and instruments are an Apokaliptian menace, but we barely get to see any of it. Instead, we focus on the main plot, which sees Jimmy and the Newsboy Legion face another ridiculous assassination attempt by Morgan Edge when he sends them to Scotland to investigate the monster in "Loch Trevor", then has some bad guys try to shoot them (couldn't he have just done that in Metropolis?). Weird. But at least it gives Kirby a chance to draw a cool Fin Fang Foom-esque monster: 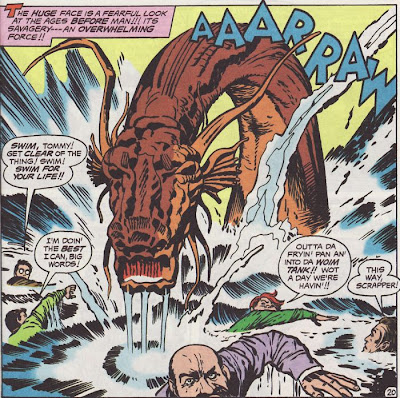 So, yeah, these Jimmy Olsen stories are starting to grate on me, but maybe this one will pick up in the second part. In the meantime, the next issue (in the order of printing) sees the introduction of Funky Flashman! Yeah, let's see Kirby put the screws to Stan Lee!
Posted by Unknown at 7:33 AM