Hey, I've been meaning to mention it, but anybody who hasn't made their way over there yet should check out the newly-launched Act-I-Vate site, featuring online comics by the likes of Dean Haspiel, Nick Bertozzi, Mike Cavallaro, and many others. Good stuff.

Also, I only occasionally link to reviews by Vern, my favorite film critic, but he recently took a hilarious look at Enchanted, filled with tangents about cartoon-fucking and that music video where Paula Abdul did a duet with a cartoon cat. If that sounds like your sort of thing, I urge you to check it out.

Okay, on to business; I'm working on getting caught up, yes I am! 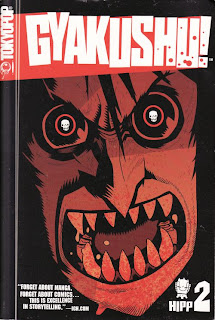 Man, oh man, this is a cool book. Sure, there are probably some other good adjectives you could use to describe it, like action-packed, or melodramatic, or, um, revenge-tastic, but "cool" works best. Dan Hipp's art has style, from big-eyed, emotional faces, to frenetic action, to soft-toned flashbacks that highlight the characters' tragedy, and his storytelling and dialogue are amazingly enjoyable to read, crafting a story that's exciting to follow and full of twists and surprises. In a word, cool.

So, even though this is the middle chapter in a three-volume story, Hipp doesn't fall into the trap of stretching out the story by continuing plots from the first part and setting up the trilogy-ending climax; he still delivers an excellent addition to the tale, in which we learn more about the characters and get some awesome action, while giving us a great cliffhanger that will make the wait for a conclusion very annoying. In fact, it's quite well put-together, jumping forward from the end of the last book to reveal what will happen next in our hero the thief's quest for vengeance, while also stretching flashbacks even farther into the past to reveal the reasons for the tragedy that befell him and illuminate the relationships between characters. It's a nice, intricate construction that totally works, even if one or two of the revelations (such as the identity of the evil bounty hunter) might not be too surprising.

But really, as nice as the story is, it's the art that really steals the day. Hipp does some nicely stylized characters, and when he throws them together in action scenes, it's awesomely exciting and visceral. But even though the action is chaotic, Hipp makes it easy to follow, showing us everything we need to see to follow what is happening: 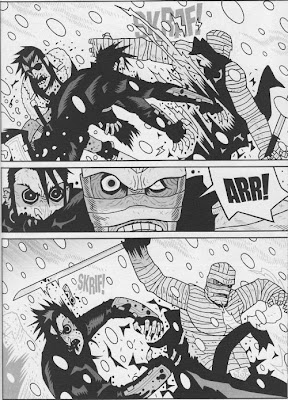 And he uses some cool stylistic devices, like jagged shadows that seem to point the reader's eye right where it needs to go: Or big, block-letter sound effects, sometimes reversing letters or flipping them upside down to highlight the chaos: 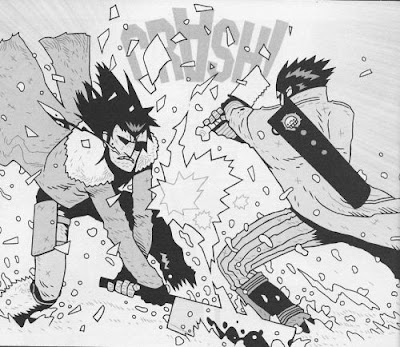 And a myriad of other cool devices. I particularly like this double-page spread, with its row of panels along the bottom that give closeups of portions of the main image: 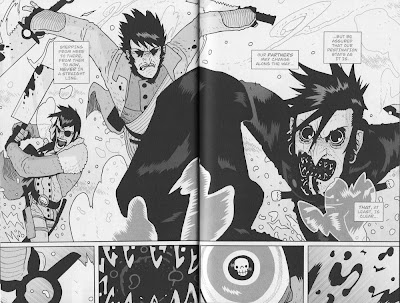 The second one from the left is especially cool; that image wouldn't even be recognizable as anything outside of the context of that large image, but when you realize it's a look at the bloody mouth of one of the characters (who, as we saw in earlier pages, had just been snacking on human flesh), it's effectively gross and creepy.

And finally, I love the subdued greytones of the flashbacks, in which we get a hint of happier times and their horrible ends: 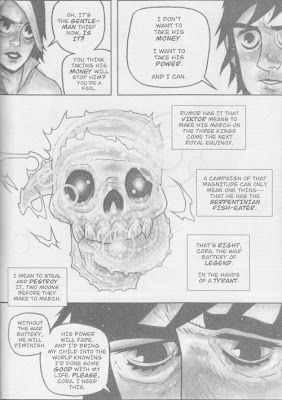 Overall, it's a great-looking book, and I'm stoked for the third volume, even though I'm sure it won't show up until sometime in 2009. That's going to be a long wait.
Posted by Unknown at 8:54 PM