Empowered: How many posts- go before this modern?

Okay, I'm starting to try to catch up. Also, I'm on Facebook now, if anybody cares. Okay: 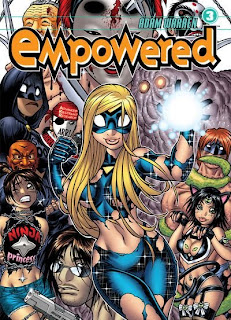 I'm not sure if I have much to say in the way of a review of this comic; I liked it quite a bit, so the same things I said for the last volume continue to apply. I think I've come to terms with what I perceived as a lack of forward momentum in the character-development department; after the character work Adam Warren did in the first volume, building convincing characters, conflicts and relationships on what seemed like such a shaky foundation, I was looking to see that kind of development each time out. Instead, Warren has been delivering enjoyable stories that hit on the usual plot points of comedic bondage, near-constant failure, low self-esteem, and the value of friendship. It's typically good, with the added bonus of hilarious jokes and beautifully dynamic artwork (especially in the incredible climactic ninja fight, which seems to just keep going on and on, getting crazier and gorier on each page). And we do get some hints at future developments of exactly the kind I've been hoping for, which, along with Warren's promise in his Deviantart journal to inject more of his awesome brand of techno-fetishist sci-fi into future volumes of the series, has me salivating for more.

But since I don't have too much of interest to say about this particular volume, I thought I would talk about something that's been interesting me about the series. It's hard to describe what it is about it that intrigues me, but I think Warren has stripped the superhero concept down to the basics of good guys fighting bad guys. It's like a postmodern (or even post-postmodern) take on the superhero, moving beyond the various movements of the past few decades. You had the "realistic" take that (probably) started with Miracleman and Watchmen and still continues, with stuff like The Authority, Wanted, and the present Kick-Ass. Then there was the reconstructionist, humanist stuff, like Marvels or Astro City. You've got the grim-and-gritty, "take us seriously, we've got violence and rape" school, and the "embrace-the-goofiness", "look at the wacky shit I can come up with" camp. But Warren seems to go with an approach I've never seen before; it's not quite metafictional, but the characters all seem to go about their activities with the knowledge of their status as costumed characters. They never seem to actually fight crime or deal with secret identities; all the villains seem to want to do is attack superheroes (and occasionally kidnap and tie them up sexily, if they're female), rather than rob banks or conquer the world. It's like they're a bunch of RPG fanatics or something, going about their fights for the sole purpose of going about their fights, instead of a larger pursuit of justice or subjugation. But after so many decades of superhero stories, it works. The groundwork has been done, and we all know the basics of heroes fighting villains; Warren has just stripped out the extraneous detail and given us the most colorful heroes and goofiest villains he can dream up, engaging in as much mayhem as he can fit on the page.

But then he goes one more step and throws in stuff like sexual hangups, fetishes, and STDs. It's weird seeing adult conceits injected into what could otherwise be children's entertainment, but since Warren is already exploring bondage and cheesecake, it makes sense to look at all the other sexual stuff that might fit into a world where adults dress up in colorful outfits and punch each other for vague reasons. And then there are the "unwritten rules" that characters discuss, in which there is a fine line of violent and/or sexual effrontery (mostly when dealing with female heroes) that villains fear crossing, because they might bring down the full wrath of the heroes. This kind of adds to the idea that everybody is all just playing a game, engaging in "heroism" or "villainy" just for the hell of it. But take it too far, and you'll be punished, at least in a harsher fashion than the usual beatings that come with the regular foiled schemes. This volume has several mentions of the "unwritten rules" (which is the phrase characters use when discussing them), which indicates that violations of these rules will most likely be forthcoming, leading to some examination of the whole idea of these hero/villain conflicts.

I don't know, maybe that's the appeal I find in Warren's comics; he likes to take things apart and examine what makes them work, whether it's futuristic technology or the basics of superhero storytelling. And he makes it fun when doing it, creating compelling characters, dynamic action, and semi-ironic portmanteau-filled language. I'm sure his style of storytelling doesn't appeal to everyone, but I can't get enough of it. Bring on the next volume!
Posted by Unknown at 9:45 PM