Looks like I'm really getting into the shonen manga here: 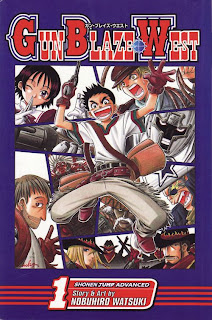 So, from what I understand, there's a pretty standard formula when it comes to shonen manga:

1. A young, enthusiastically optimistic protagonist has a dream to be the best there is at something.
2. As he pursues his dream, he encounters others who share the same dream, but end up opposing him. He invariably defeats them and persuades them to join him on his quest.
3. Repeat number 2 indefinitely, until either merchandising ceases to be profitable, readers get sick of the whole thing, or the creator convinces his bosses to finally let him end the damn thing.

I really haven't read many shonen series, but Gun Blaze West certainly holds up to that formula (except maybe the second part of number 3, but that was just facetiousness related to the intimidating length of so many series). We first meet its hero, Viu Bannes, as a nine-year-old denizen of a strangely mountainous part of southern Illinois who is enthusiastic about gunslinging, planning to make his fortune in the West. After winning an awesome gun belt in an arm-wrestling contest, he meets up with the sleepy-eyed, Muppet-faced Marcus Homer, a disgraced gunslinger who has left the West in shame. But Viu's optimism (and a crush on Cissy, Viu's protective older sister) gives him encouragement to give it another try, so they decide to train together to gain the strength to go west and eventually reach the fabled Gun Blaze West, some sort of utopian place where worthy gunslingers all hang out together. Yeah, I don't get it either, but it makes for a good nebulous goal for Viu's quest.

All this would probably be boring stuff to slog through, but Nobuhiro Watsuki (who, by the way, also did Rurouni Kenshin, which I might have to read now) really designs some appealing characters and dynamic layouts, making it a fun romp that encourages lots of page-turning. Even though Viu is pretty generic personality-wise, he's so expressive and enthusiastic that I can't help but get on his side: 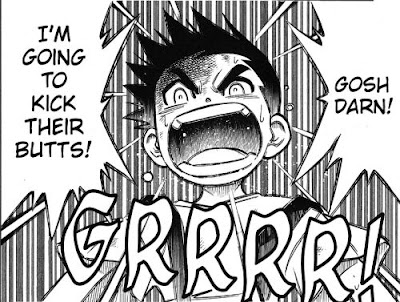 And the action is pretty incredible, full of wild viewing angles and exploding speed lines: 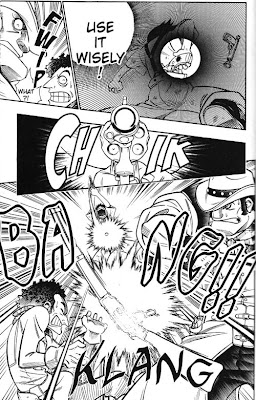 And I love this neat vibrational effect he uses to capture the moment of impact of a punch or shot: 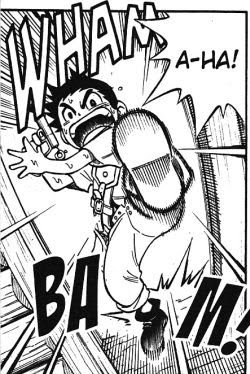 I hadn't seen that effect before, but I like it a lot. Watsuki varies it a bit; in that example, it's limited to Viu's foot, but sometimes he increases the amount of the "vibration" or expands it to fill whole panels or pages. You can see some examples of that in the images below.

I'm also surprised by the level of violence. I'm glad that Watsuki didn't pretend that gunfighting wasn't dangerous, but it's still weird to see a little kid getting involved in shootings and fist-fights. Seeing stuff like this is just offputting: 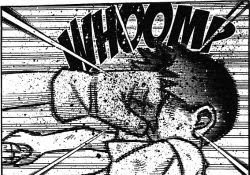 Of course, most of the action is so over-the-top, it doesn't seem real anyway. When you've got crazy scenes like this, you don't really worry about the characters actually getting hurt: 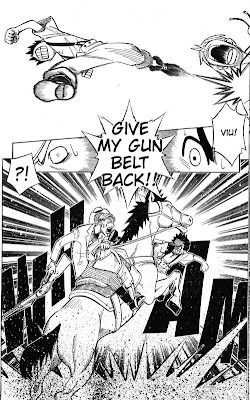 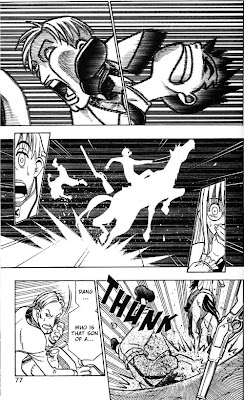 But Watsuki doesn't back down from the consequences of the violence. A confrontation with the devious Kenbrown gang leads to a climactic faceoff with dire consequences (I'm trying not to spoil anything here), and Viu's reaction is so genuine and emotional, you can't help but root for him from that point on (if you weren't already). It's some damn effective storytelling.

After that climax, we jump forward five years to see Viu finally set out on his quest. In another example of Watsuki's skill, he does a great job of making Viu look a few years older:

His eyes and mouth are smaller, he has an actual nose, his head is more oval-shaped, and his arms and legs are a bit longer, but it's nothing so drastic that he seems like a different character. Instead, it's a subtle progression, and a nice, realistic touch to such a goofy, cartoonish series.

Anyway, this is when the real shonen formula kicks in, as we see Viu travel to St. Louis and meet another boy who dreams of traveling west. He's got a specialty in lassos, which should probably lead to some cool action when the two of them team up in the future. But right now they're busy tussling with some local toughs, which will surely lead to some enjoyable action in the next volume. I'll definitely try to read it.

So, yeah, I certainly enjoyed this book, even though it's aimed at a lower age level than the stuff I usually read. There's plenty of bodily-emission humor, and the characters are pretty broad and simplistic, but it's just so well done I can't help but like it. Maybe I just need to read more shonen manga; I've mostly ignored the genre since the formula just didn't seem appealing to me, but I'm starting to understand why it's so popular. Crap, now I've got another whole area of comics to try to catch up on.

This review was based on a complimentary copy provided by the publisher.
Posted by Unknown at 9:23 PM