Griffins, basilisks, and unicorns, oh my!

For the final Fourth World Panel of volume 2, from Superman's Pal, Jimmy Olsen #145, I chose to spotlight this awesome bit of Kirbytech: 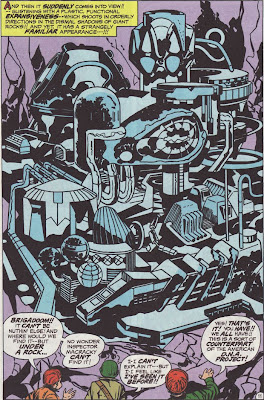 Holy crap, that's cool, right up there with the best of Kirby's architecture. It turns out that's the "evil factory" that menaced the DNA Project back in volume 1, but, in a nice reversal on Kirby's usual gigantic scale, it's actually tiny, shrunk down to ant-like size and kept underground. Gotta love that imagination. Also in this issue, we see Superman and Dubbilex the DNAlien take on those weirdo musicians from the previous issue, the Newsboy Legion zoom around underwater fighting giant creatures, Jimmy Olsen transformed into some sort of de-evolved freak (a good Kirby spin on the old "Jimmy transforms into something" plot), and a monster menagerie:

That's only one panel of three on a double-page spread, and it's a beautifully innovative layout, with each panel acting as a separate "pen" for the creatures that the characters are viewing, with them looking into the panels like windows. The creatures are enjoyably weird too, especially those little hairballs (even though basilisk is actually a snake, isn't it?) and that fearsome-looking unicorn (it's not a peaceful, pretty horse-with-a-horn in Kirbyland!). But I especially love Flippa Dippa's crazy outfit. I need to get me some Kirby-designed clothes like that!
-----

And that's the last of this volume, although I'll probably do one more post to show off some of my favorite covers from this edition. And then I need to get the next one pronto. I gotta keep going until I get to that remastering of "The Hunger Dogs"!
Posted by Unknown at 8:46 PM