North World: I failed to note the appearance of any robotic Yul Brynners

Oh, man, I'm giddy with the anticipation of getting caught up on my reviews! Or maybe it's just too much caffeine, since I've been downing a lot of coffee lately to make up for the lack of sleep. Anyway: 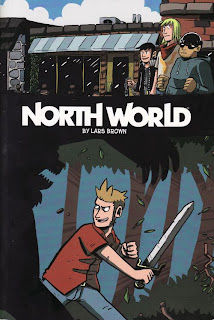 It almost seems unfair to compare Lars Brown's North World with the somewhat similar Scott Pilgrim, but since Bryan Lee O'Malley's popular series seems like an obvious influence, it's probably pretty apt. Brown's book details a world that seems pretty modern, except for the fantasy elements, like magic, giant animals, demons, and warriors engaging in epic quests. It's an interesting idea, but it's not quite as successful as Scott Pilgrim, mostly because the odd incongruities stand out and become distracting. O'Malley's technique works because it's basically a non sequitur; fantasy, martial arts, and video game elements show up out of nowhere, and the characters just accept them as if they are normal. But Brown doesn't pull it off so effortlessly; the swords stand out against the backdrop of cars, power lines, and storefronts.

Of course, Scott Pilgrim also has the advantage of being a comedy; the absurdity of the fantastical elements (and the characters' blase reactions to them) only adds to the humor of the book. North World, on the other hand, seems to start out as a comedy/adventure book, with a Kevin Smith-style scene of questing warriors complaining about the annoyances of trying to make a name for yourself as a hero and then a goofy fight with a bear: 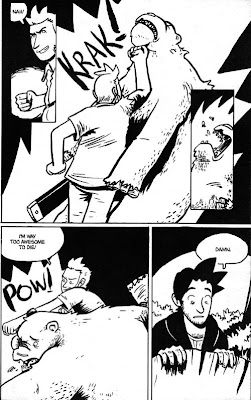 But the book soon settles into a more dramatic mode, with hero Conrad being sent on a quest to his hometown to defeat a demon summoner. We learn that he left town abruptly seven years ago to pursue his dreams as a warrior, and now he's got to go back and face his family and ex-girlfriend, who, in a further emotional complication, is getting married. This makes for a pretty abrupt tonal shift, as Conrad ends up getting back in touch with friends and dredging up old memories as he searches the town to find the identity of the demon summoner. But it works pretty well; we get a feel for Conrad's desire to follow his dreams, but also his guilt about leaving, especially something involving a yet-to-be-explained incident which may or may not have ended in the death of his mother. Most emotional of all, he has to face his father, who doesn't approve of his choices and wants him to settle down and become an accountant. So, despite the genre trappings, Brown is going for some universal themes here, and he does it pretty effectively.

What makes it work is the characters. Conrad is very well-defined, and even though he's not especially open with his feelings, we get a real feel for what's going on in his head through his interactions with others. He's kind of hotheaded and obnoxious (he refuses to help a friend with a giant rats infestation, because "Giant rats are for newbs and retards"), but he's also good-hearted and thoughtful toward friends and family, and he definitely shows some growth over the course of the book. I especially liked his relationship with his ex and her husband-to-be, who ask him to be their best man. And a scene in which he has dinner with a friend's family and observes how happy and close they all are is revelatory, for him and us. Brown does a great job of getting us interested in him and wanting to come back for the next volume.

And the art is pretty nice as well. At the beginning of the book, the style is kind of "webcomicky", featuring the cartoony, thick-lined look of a lot of online comics (although it doesn't seem to be especially manga-influenced). In fact, the series began as a webcomic, and at least some of it (along with other stories taking place in the same "universe") is available to read on Brown's website. Later in the book though, the art gets more elegant, with thinner lines and more detail, almost a Tintin-esque, "Clear Line" look: 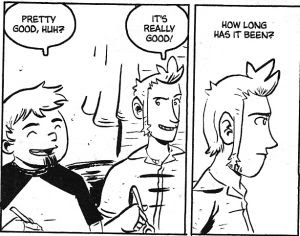 But even early on, the art is richly-detailed, full of nice background imagery and expressive characters: 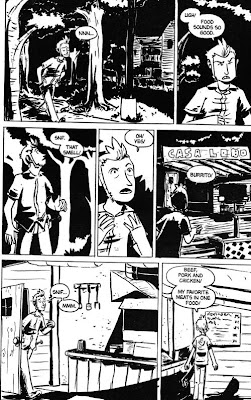 So I would say that it exceeded my expectations and ended up being much deeper and more interesting than I thought it would be. And while the Scott Pilgrim comparisons are probably unavoidable, Brown is good enough that the work stands on its own. Sure, he indulges in some goofy genre silliness, but even if you find that distasteful, the nicely-developed characters make the story worth reading. The wait for the next volume promises to be tiring.

This review was based on a complimentary copy provided by the publisher.
Posted by Unknown at 2:20 PM