Well, I was going to review some new comics, but I've been meaning to post about this one, and this is my last chance before Christmas. So here we go, for a special Yuletide look at: 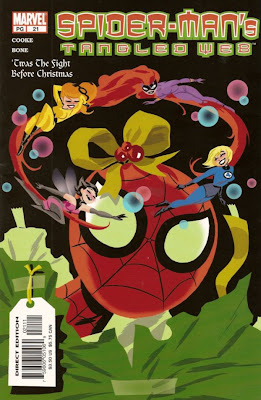 We begin our story with a text-piece (with illustrations; this is a comic) telling us that Peter Parker, having been sent from the Daily Bugle Christmas party to buy a present for J. Jonah Jameson's wife, stumbles across a group of schoolchildren who missed their train out of the city. So he brings them back to the party and heads out to do the shopping: 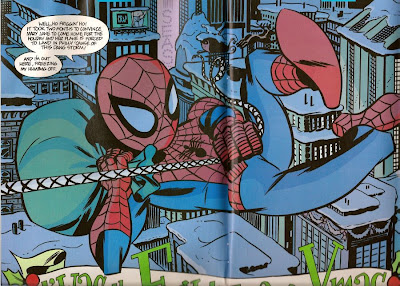 (as always, click on pictures to see a bigger version)

Gotta love that big Darwyn Cooke double-page spread. I couldn't even fit it all on my scanner. Meanwhile, back at the Bugle, Jonah's being driven crazy by rampaging kids: 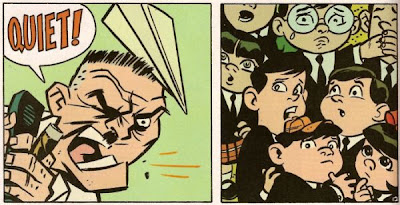 What a meanie. But I bet he'll soften: 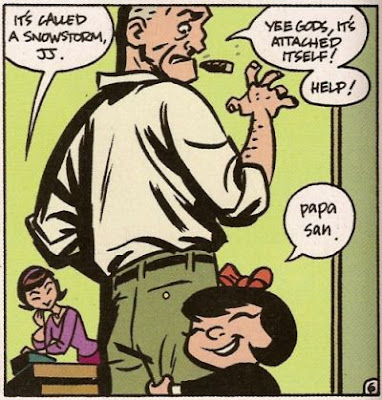 Pretty cute! Apparently, the kids are Japanese. Anyway, Peter shows up with some toys for this kids: 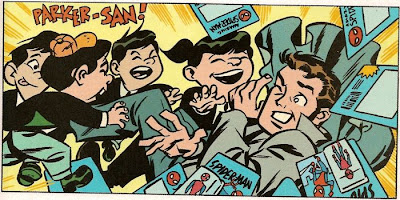 He looks like an Archie character here, doesn't he? He used JJ's money to buy toys, but forgot to buy the present for JJ's wife! So he's gotta head back out to the store. Meanwhile, at Fantastic Four headquarters: 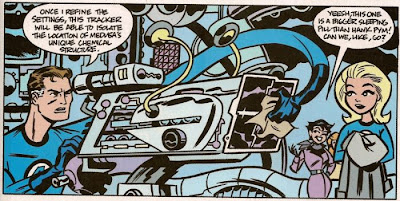 Sue Storm (Invisible Woman), Crystal, and Janet van Dyne (the Wasp) head out to do some shopping. However, two mysterious figures lurk outside the department store: a short man and what looks like a tall woman wearing a costume snowman head. They see a poster advertising an appearance by Spider-Man. The man says, "Well, my dear, I must admit I hadn't planned for the appearance of this wall-crawler, but I've come too far to turn back now." Uh oh, dastardly plans are afoot! They probably won't have to worry too much about Spider-Man, though: 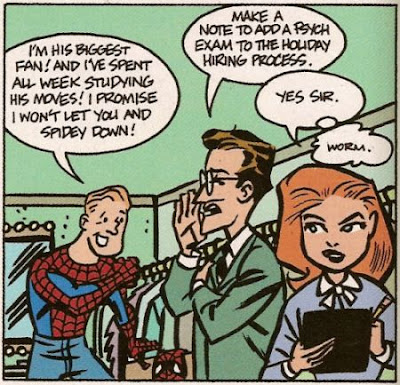 It's Flash Thompson! When the bad guy gets inside, he exerts some kind of mind control over "Spider-Man": 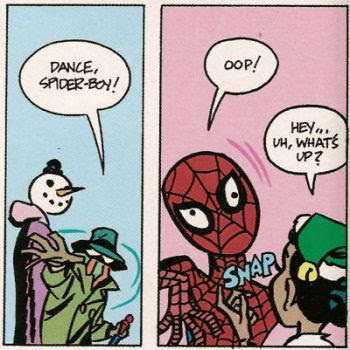 Oh boy! Then they knock out and replace Santa, and this happens: 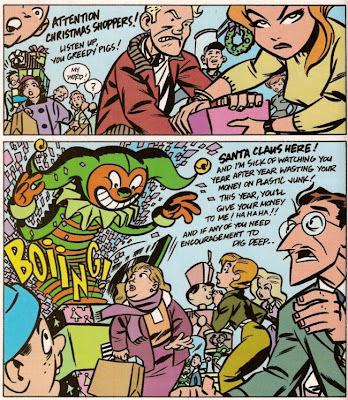 And the woman in the snowman mask turns out to be:

She and "Spider-Man" proceed to rob the place: 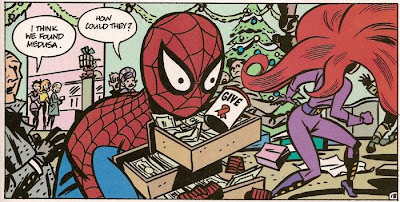 But Sue, Jan, and Crystal spring into action to stop them: 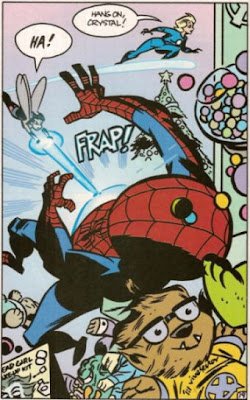 Gotta love the X-Statix toys. I want a L'il Vivisector. Anyway, while the battle is raging at Macy's, Jonah's back at the Bugle regaling the kiddies with stories about fighting the dastardly Spider-Man: 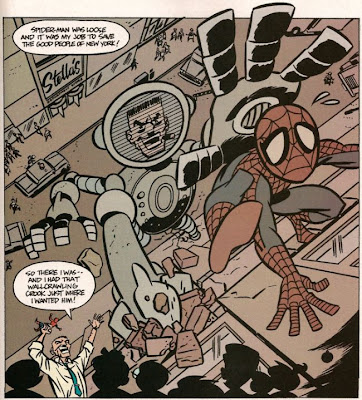 The kids stop him, telling him Spidey's a hero. But then he gets some news which gives him an idea: 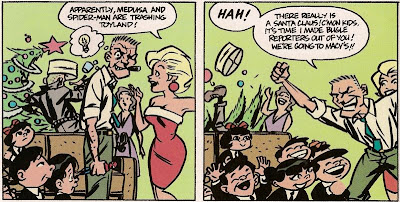 Meanwhile, Peter's just showing up at the store, when he sees the chaos: 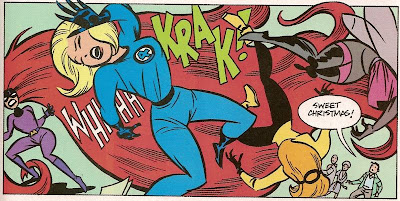 I guess he's been hanging out with Luke Cage. He checks out the recently-knocked-out "Spider-Man", discovering that it's Flash. Then he gets into costume and rushes into battle. Here's a great Rube Goldbergian fight scene against Medusa: 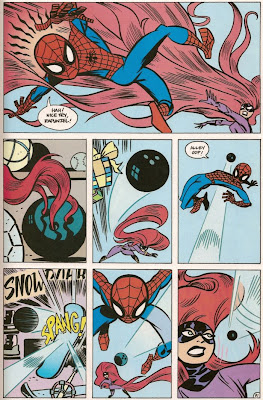 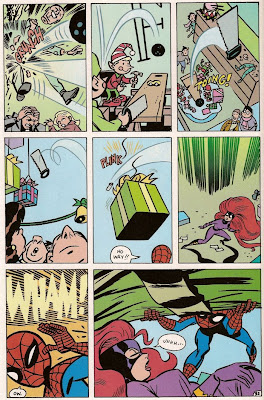 That's hilarious. The FF shows up to help just as Medusa is stopped. Spidey gets into a bit of an argument with the Thing: 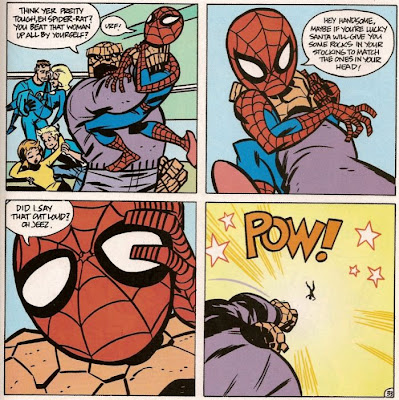 Ouch! But he lands on top of an escaping Santa Claus, who is actually... 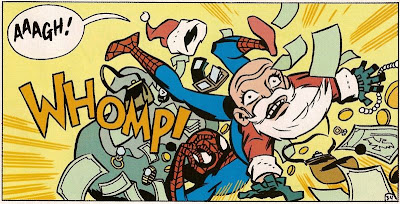 The Puppet-Master! What a meanie, trying to ruin Christmas! And Jonah's kind of mean too: 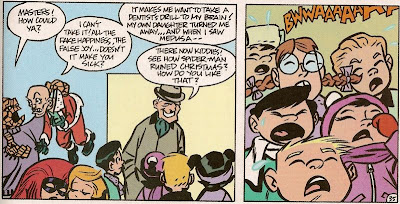 Aw, poor kids! But as we can see in another text page/illustration epilogue, he's still good at heart: 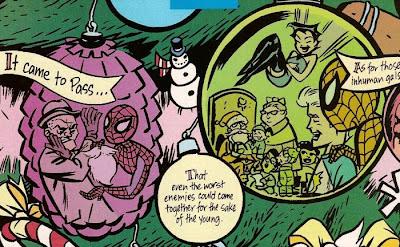 Plus, we also find out that his Christmas present to Peter was to fly Peter's wife Mary Jane into town for the holidays! He's not such a bad guy after all! We wrap up the story with a great splash page: 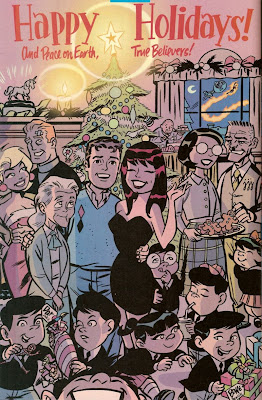 And that's all! Merry Christmas, everybody!

P.S. Can we get Darwyn Cooke to draw more Spider-Man or Fantastic Four stories? We need more of these fun stories in Marvel comics!
Posted by Unknown at 9:43 PM