Lateness, and the posting thereof

So, it took me a while to get around to it, but here I go reviewing some of the new comics I read this week. Off we go: 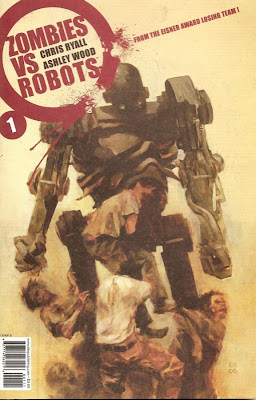 Zombies vs. Robots #1 (of 2)
This actually came out last week, but I wanted to talk about it. I probably would never have picked this up if Jog hadn't convinced me. I didn't know anything about it, and even after I read a description, I was hesitant, since I don't usually buy IDW books due to the cost. They charge $3.99 for pretty much the same amount of content that most companies charge $2.99 for. It's just over that fine line of how much I want to pay for a comic in pamphlet form. But Jog's review made it sound pretty good, and I dig Ashley Wood's art, so I ended up picking it up. I'm glad I did.

The comic is written by Chris Ryall, with art by the aforementioned Wood. I haven't read much by Ryall (didn't he used to write for Comic Book Galaxy?), but Wood's art sells the book anyway. It's that really cool scratchy, rough style that he does. The story is your standard zombie story, although it's in the future after mankind has created dry-witted artificially intelligent robots to do our work for us. After everyone is wiped out, they are all that's left. We learn this from an exposition-bot that breaks into a TV station and broadcasts the story, I guess as a history-recording measure. Here he is after encountering zombies on the way to the station: 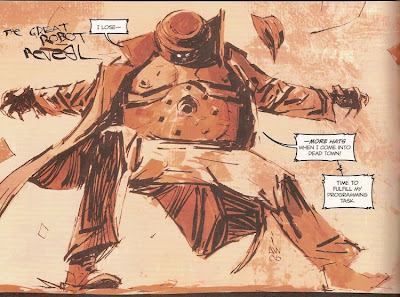 That's awesome. I would hate to lose my hats to zombies all the time too. So anyway, we learn that the zombies have discovered a human baby, the last human left. All they have to do is protect the baby until they can clone it and bring the human race back. But first they have to figure out how to change diapers. It's Three Robots and a Baby! We learn about the different models of robots, and how some are more advanced than others. We also learn that zombies have a hive mind, so if one discovers a scent, others know where to look for the food that they find. Thus, the zombies must never find out about the baby. Any guesses as to what happens? It's a fun story, but the real highlight for me was Wood's gorgeous art. Here's some of my favorite scenes from the book: 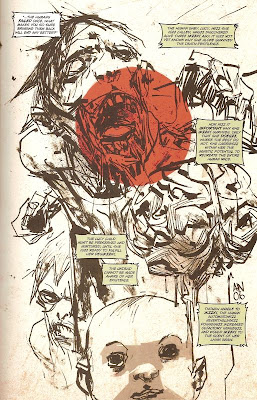 This is from an exposition page, but it's just amazing the crazy detail Wood includes. He even has a zombie-style pain box! 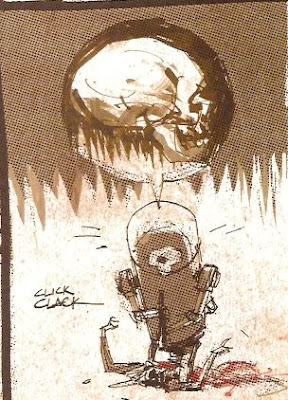 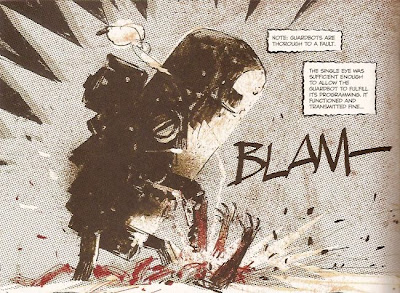 Those are two consecutive panels, but on separate pages. I love the word balloon in the top one.

The book is filled with stuff like this, and pages with tons of little panels on them. It's super-cool. Definitely worth my four bucks.

Bonus Ashley Wood pin-up (from the back cover, advertising what I think is an art book): 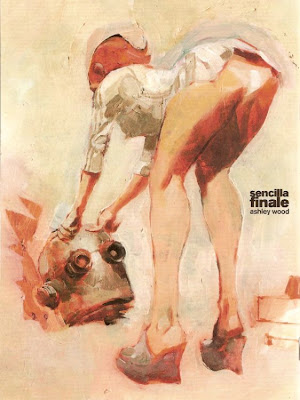