Quickly: I've got a review of Checker's reprint of Winsor McCay's Dream of the Rarebit Fiend: The Saturdays up at Comics Bulletin, so check that out (if you feel like it). Then:

Today's Fourth World panel is all about the weird dialogue: 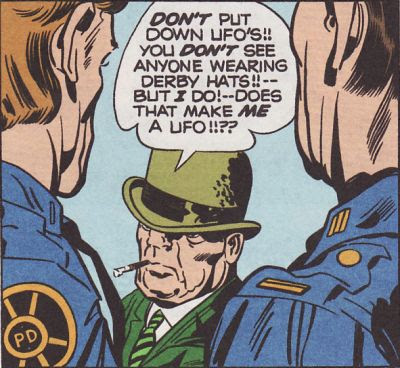 I have no idea what that means, but it amused me. Usually Kirby's dialogue makes a twisted sort of sense, but that statement is just odd. Anyway, it's the first appearance of "Terrible Turpin", who later went on to become a supporting player in the Superman books (this is the same Dan Turpin, right?).

Also in this issue (since I can't stop myself from scanning more than just one panel for each of these posts): Orion cackling madly as he beats an Apokaliptian beastie to death: 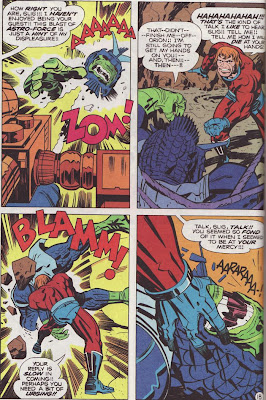 That's pretty brutal and unexpected, to see the hero of the book savagely killing a villain. I imagine it was a surprise to readers at the time, and it was a good hint of the coming revelation about Orion's origins. Nice. And awesome, of course. I can't wait for the next issue, in which Orion has to face some sort of giant mutated whale.

On another note, this issue is the debut of inker Mike Royer (in the Fourth World comics anyway; I believe he had previously worked with Kirby at Marvel), who worked with Kirby a lot over the years. Now, I know Vince Colletta gets a lot of flack as a poor inker, but judging by this issue, I think I prefer his work to Royer's. So far, at least. I know I've read some later stuff that Royer inked, like The Eternals and Captain Victory, and I liked it a lot, so maybe he got better as he went on. But just comparing the image above to the previous issue of New Gods, Colletta seems to make the faces less "messy". Well, we'll see how it goes through the rest of the book. For this volume, Royer inks all the books except Jimmy Olsen, which Colletta continues on.