It's time for the monthly dose of girliness, but first, I've got a review of the first issue of Garth Ennis' new Marvel MAX war series, War is Hell: The First Flight of the Phantom Eagle. I thought it was pretty damn good, even though I generally dislike Howard Chaykin's art. Okay, on to the main event: 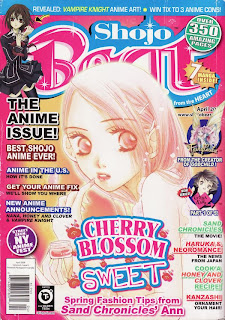 As the cover says, this is "the anime issue", but there's really only a little bit about animation within, limited to a list of editor Nancy Thistlethwaite's favorite titles, a mention of the upcoming Vampire Knight series, and brief articles about the anime versions of Honey and Clover, Nana, and Haruka (Viz is releasing the first two, so there's some cross-promotion going on here). So, whatever. On to the manga:

This month's preview chapter is of a new series by Kaori Yuki, the creator of Godchild and Angel Sanctuary. I've read some of the former, when it used to be serialized in the magazine, and I hated it; it was all so nonsensical and pointlessly gothic. So I'm generally not disposed to like her work, even though I've heard Angel Sanctuary is pretty good. This one wouldn't normally lead me to think otherwise, but there seems to be some interesting metaphorical stuff going on here. The story has to do with a boy named Ian who is being stalked by a troublemaking spiritual double of himself named Tokage, who is always causing problems. Of course, nobody believes him when he claims he can see fairies, so he's known as "Ian the Liar". He used to be friends with a girl named Rin, and even got her to see fairies with him, but he distanced himself from her because he believed she was going to get hurt by dangerous fairies or something. Now that they're both in high school, she is trying to get close to him again and find out what his deal is. And there's also some crazy stuff about a serial killer who seems fairy-related and magical forces at work and whatnot. But the interesting angle, to me, is the way this all seems to be a metaphor for abuse. Both Ian and Rin have abusive parents, and it seems like the series will be a look at the way children deal with abuse, constructing fantasy worlds for themselves as an escape from the terror of their lives. Of course, Yuki might be going in a different direction, involving Ian and Rin in a quest through faerie as they fight murderous creatures or something. But this chapter, at least, seemed pretty resonant, and had some striking imagery, like this shot of Ian and Rin seeing fairies: So who knows how the series will turn out, but I'm intrigued by the first chapter.

And here's the debut of the magazine's new series, from the creator of Punch! and Happy Hustle High. It's about a demon girl named Rara who is posing as a human as a way to romance her dream guy, a demon named Hiroshi Akusawa, who is the top performer of evil deeds on earth. She's a cute, spunky protagonist, and she has a snooty rival named Bibi who is also going after Aku. It's your basic shojo comedy, with a supernatural twist. Also, she ends up falling for a human guy, which will surely cause plenty of craziness in the future. Takada has a pretty appealing style, with lots of dynamism and expressive conversations. She goes to the super-deformed well a bit more often that I would prefer, but she has an interesting way of doing it, reducing her characters to rounded, baby-like figures: 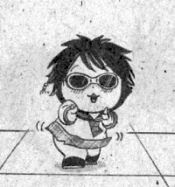 Eh, the series seems nice enough, but I'm kind of glad it's only five chapters long. Who knows, it might turn into something awesome in the future, but for now it's just a pleasant enough source of cuteness. We'll see how it goes.

Well, I managed to go one month without talking about my most-disliked series, but this issue has something to talk about. A short article describes the video game it is based on, and it kind of explains what is up with the series. While I had assumed it was a role-playing game (it's about a girl whisked to the past and gifted with magic powers who teams up with eight guardians and tasked to fight an evil force), it's actually in the "neoromance" genre. This means it's kind of a girly type of dating sim, in which you can try to romance each of the eight guardians, who all have different personalities and plots and whatnot. So now I understand the weird plotting of the series, and the focus on the different people that are joining Akane's army. Sure, it's still not done very well in terms of clear storytelling and sensical plotting, but if the focus is all on the possibility of romance with the various hot guys in the cast, does any of that matter to the intended audience? It might be the first case of a series in the magazine that is so opposed to my point of view that I just can't get into it. I guess my propensity for reading stuff aimed at young girls was going to come back to haunt me at some point.

So anyway, this chapter focuses on the past of one of those guardians, Major General Tachibana. In a flashback, we see that he was a player, always scoring with the princess's handmaidens and refusing to be serious about relationships. But, the teenage reader thinks, maybe I could get him to finally settle down! As always, I say "meh". On the positive side, I did enjoy this sound effect: 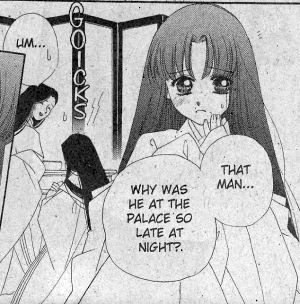 But that's about the only thing I liked. Let's get back to the weird stuff, so I can feel like I'm not completely wasting my time reading it.

This chapter, Zero and Yuki face off against some vampire assassins who think Zero killed Shizuka Hio. But then the vampire students show up to save the day, and one of the bad guys totally gets his arm blown off: Whoa. Other than that, it's more of the same confrontations and talking that happens every month in this series. But it looks like there might be some plot movement, with the impending shojo milestone in which Yuki faces the choice between her two love interests. Drama! I also like the idea of Kaname struggling to control his newfound power (which he acquired after he killed Shizuka Hio). Maybe it will cause him to actually emote; he's one of the most annoyingly inexpressive characters I've ever seen. Come on, man, crack a smile or make a frowny face or something! So, yeah, business as usual; I expect the series should be able to keep my interest.

All right, some volleyball action! I always like the infrequent times when an actual volleyball game occurs in this series. This month, we see Nobara and her adopted team play some "real" athletes, the college team at Central Sokai University. To complicate matters, Nobara's love interest, Yushin, shows up to watch, and maybe even realize his feelings for her: 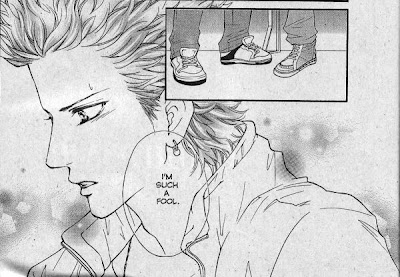 Ooh, how cute! Hopefully there will be some setbacks or something next month; things seem to be going altogether too easy at the moment. Sure, a victory will be nice, but you gotta earn it. And then we can get back to the main plot and do the whole "team learning to work together" thing. Go team!

Another good chapter of one of my favorite series, but that's almost become a given each month. This time, Ann gets to travel back to the country and be with her boyfriend Daigo for the summer, but she's still guilty and emotionally conflicted about that time (last month) when Fuji kissed her. Cue the angst. We also get some drama about Fuji's sister Shika being pestered by their mother to act ladylike and not associate with "commoners" like Ann. And then there's the awkwardness between Ann and Daigo, which begins in this hilarious scene which takes place in his messy bedroom: 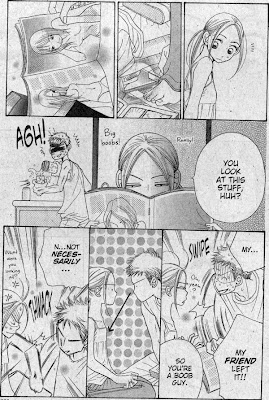 Hilarious. But it leads to some awkward making out in which she gets mad at him for being too forward. Ah, the worries of teenagers. I love how it's all so realistically portrayed, even with the amped up levels of emotion and drama that you get with manga.

So yeah, it's a good chapter of a great series. I'm never disappointed by this one. Let's keep that streak going!

And then there's this series, which is just incredibly enjoyable, full of hilarity and drama. First, the gang gets together for a dinner party (with some horrible food made by Hagu, like "Chocolate Mintkin", a half-pumpkin filled with scoops of chocolate mint ice cream), which turns into a birthday party for Takemoto (nobody remembered). Morita comes up with an impromptu gift: a homemade "Twister" mat. This leads to a hilarious scene of the two of them having a match and getting painfully entangled: 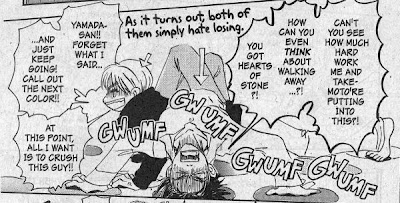 While the others call out ridiculous colors like "pale pink", "mineral violet", and "passion blue", watching in horror and turning into characters out of a manga by Kazuo Umezu or Hideshi Hino: 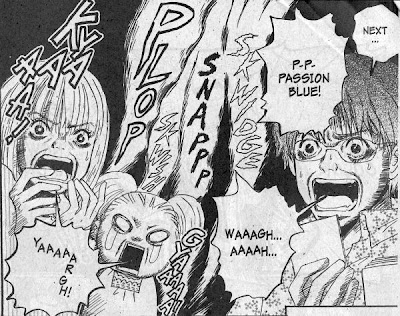 Oh god, that's some laugh-out-loud funny stuff. To me, at least.

And then we've got the usual drama, as Takemoto continues to pine for Hagu, while at the same time, she seems to be falling for Morita (who probably reciprocates, since he always picks on her, in the manner of pre-teen boys with crushes). And Mayama pines for his old boss, while Yamada pines for Mayama. And Professor Hanamoto, off on a research trip to Mongolia, misses Hagu desperately: 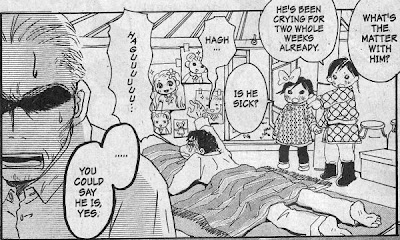 There's also a funny bit where Takemoto hangs out with Hagu, but she's watching a neighbor's dog, a poodle that is drawn with a face like a Japanese demon that seems ready to eviscerate him. Like always, the series is a great mix of comedy and drama, with nice art and some really poignant moments. It's another series that I really love, and I can't wait to read more of it each month.
-----

Okay, I think that's it for this month. I'll be back with more next time. As for other content, I've got at least two books on my plate that I need to review, so hopefully I'll be able to find time to do so. Watch this space!
Posted by Unknown at 10:59 PM