Phoenix: That is one hot birdie

Okay, we'll see how much of this I can get through tonight; baby- and wife-care takes up most of my time at the moment (not that I'm complaining; I'm loving every moment of it), so we'll see how often I'm able to sneak away and write reviews or whatever. This is a book I simply must talk about though, so expect something long-winded. But worth it, because Tezuka rocks! 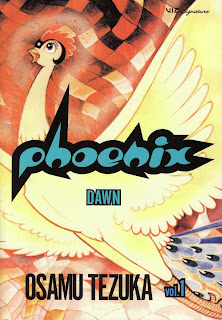 So here's the beginning of Osamu Tezuka's great, unfinished masterpiece, his life's work. A few years ago, I read the second volume of the series, Future, after checking it out from a library, and loved it. This was before I had read much manga, if any at all, but it really blew me away with its combination of cartooniness and sophisticated sci-fi storytelling. At the time, that was the only volume of the series available in the U.S., but Viz has now published the full series (what there is of it; Tezuka died before ending it), so I'm able to start from the beginning and take the whole thing in order (which is also out-of-order, at least chronologically; Tezuka structured the series to jump back and forth in time with each volume, converging toward the present).

But having read that second volume, I wasn't quite prepared for the power of this one. Rather than being a cosmic sci-fi tale, it's more of a historical story, looking at early Japanese cultures and warfare, with a similar emphasis on life, death, and humanity's purpose in the universe. In fact, it also shares some of the same philosophical questions as Buddha, helping to provide a fascinating look at Tezuka's worldview.

But it's also a rip-roaring tale of violence, war, revenge, power, and lust for immortality (which are probably themes of the entire series, judging by the first two installments). It begins in third-century Japan, as a primitive tribe of people worry about the fate of one of their warriors, who has gone to try to capture the titular bird, which is rumored to provide immortality to anyone who drinks its blood. He dies trying (it's way too early in the series for anyone to even come close to succeeding at that task), dooming his sick wife Hinaku, who is being watched over by his young brother, Nagi. But then a man from a neighboring island washes up onshore, and luckily he's a doctor (in a cute bit of Tezuka humor, his name is "Em Dee"). He manages to cure Hinaku, and then marries her, only to later reveal himself as a spy for his home country of Yamatai, whose warriors invade and annihilate the population of the village, killing everyone, including women and children.

The only survivor is Nagi (oh, and also Hinaku, who is spirited away by Em Dee), and he lives because the leader of the Yamatai army, Saruta, decides to take him as his slave. When they return to Yamatai, we learn that their queen, Himiko, is getting old, and is also seeking the Phoenix in an effort to regain her youth. She's a sorceress who keeps her people in line with "magic", but as she ages, her people are losing their trust in her, and she's afraid they will rise up against her.

Meanwhile, Nagi has sworn to kill Saruta in revenge for his village, but Saruta intends to train him with the bow, in order to kill the Phoenix for Hinaku, whom he worships and reveres without question. From there, the plot takes plenty of twists and turns, involving assassination plots, more Phoenix-hunting, escapes, attempts to rebuild a decimated society, and another invading army that sets up a huge and exciting climactic battle. It's great reading. Similar to Jack Kirby, it seems to me that Tezuka kind of wrote this stuff off the top of his head, coming up with awesome scenes and crazy, incongruous jokes on the fly. I'm sure he had key plot and character points in mind, but one definitely gets the feeling that anything can happen in his stories.

But they're still grounded in character, and Tezuka manages to build those characters in the middle of action scenes, rather than using lengthy exposition. Saruta is a favorite of mine from this volume (and from what I understand, he is reincarnated several times in future volumes); he loves and worships his queen, but isn't stupid. He wants what is right for his people, and he stick up for those he loves. He's a big, tough man, but surprisingly sensitive. You can see his growing affection for Nagi over the course of the book, eventually referring to him as his son in a few rather touching scenes. He also takes an interesting visual turn; here's how he initially looks:

But a mid-story incident involving hornet-based torture morphs him into a more recognizable form: That's right, he's Tezuka's recurring "Big Nose" character! In addition to his appearances in Phoenix, he also had a role in Black Jack. Cool.

Many of the other characters in the story are very well-realized and fascinating, including the aging, increasingly ugly Himiko. Dig the way Tezuka makes her age over the course of the book: Tezuka does something similar with Nagi; at the beginning of the story, he's a young, naive child:

But by the end, he has matured into a brave, fierce (although still young) warrior: 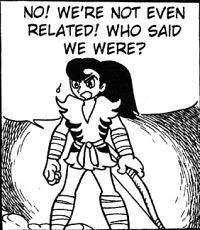 It's pretty subtle, but unless it's only psychological on my part, I see a lengthening of the limbs, a reduction in the size of the eyes, and a slight change in the shape of the face. But it's nothing obvious; it seems like the character has just grown over the course of the story.

I haven't even gotten to other characters that fascinated me, like Hinako's brother Susano, a manipulative schemer who turns out to have the land's best interests in mind when he begs her to give up her mystical hokum; or Hinaku, who vows to repopulate her village by birthing a thousand children. But I also wanted to talk about Tezuka's amazing artwork. As always, he pens stunning landscapes and interesting layouts, but he does plenty of other great storytelling. I love the sometimes variable level of detail he uses, especially in crowd scenes or action scenes. Sometimes he'll reduce the people to near-abstractions, conveying just enough detail to get across the idea of what is going on (although his skill is such that the lack of detail is probably not even noticeable): 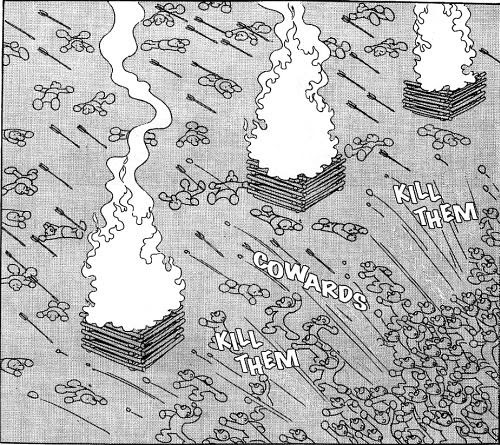 But other time's he'll give every person in a crowd unique features, emphasizing their individuality: 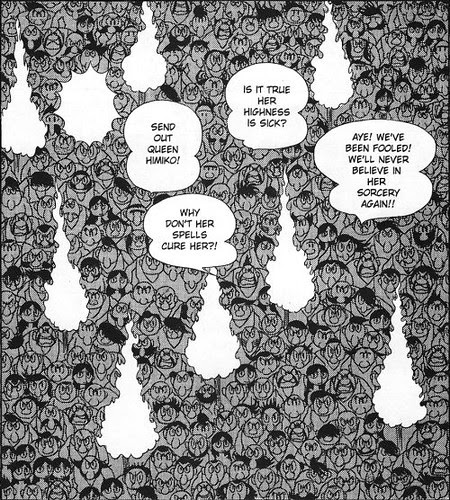 He could also draw some incredible action, viscerally capturing the reader's attention: 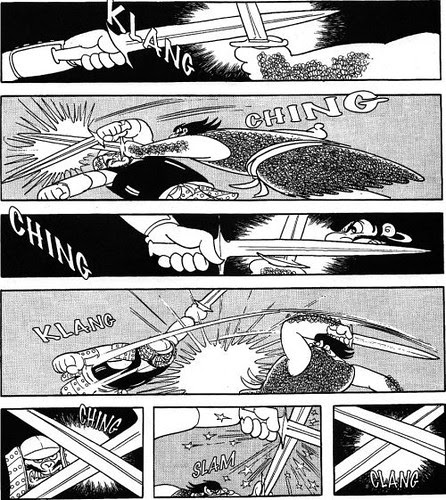 And although his style is cartoony, he didn't spare the detail when dealing with harsh themes like war and genocide; plenty of gory deaths happen on panel, and they're felt as much as if they were rendered photorealistically. He also uses some really cool effects here; I especially liked one scene in which Saruta and Nagi met up with men from another civilization, who ride on strange beasts. Tezuka bathes that first encounter in deep shadows as if the sun is shining directly into the readers eyes, emphasizing the mystery of these unknown creatures: 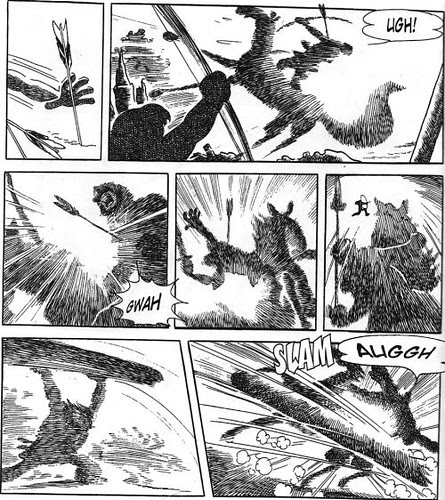 I love that sort of thing, and I love how Tezuka seemed to do it instinctively.

And then there's the weird humor, which I feel like I can't talk about Tezuka without mentioning. I don't know if he did it because he got bored or something, but he would inject some strange stuff into his comics, from slapstick, to fourth-wall-breaking antics, to anachronisms, to just plain silliness. That sort of thing is all over this book, and while I've become accustomed to seeing it in his works (and actually enjoy it quite a bit; much of it is hilarious), it must be really strange to a newcomer. But I guess it's something you have to be ready for when reading Tezuka. Here are some of my favorites:

Nagi converses with his creator: 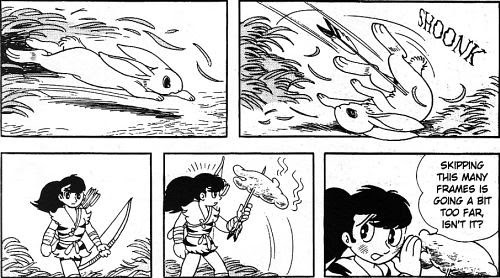 Some animals engage in slapstick while fleeing a volcano eruption: 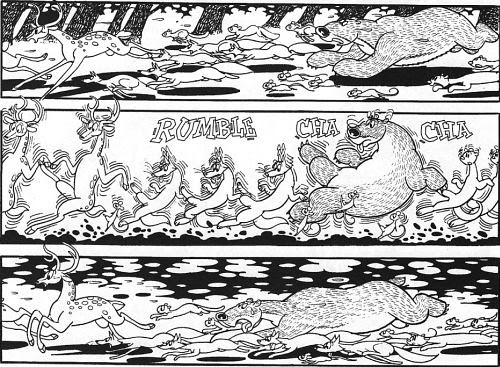 Himiko turns into various historical leaders while giving a speech: 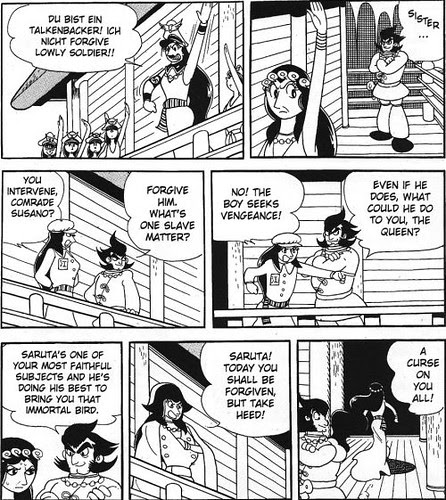 Some wolves engage in various styles of motion while advancing on some prey (the first tier is "Kabuki style", continued from the previous page): 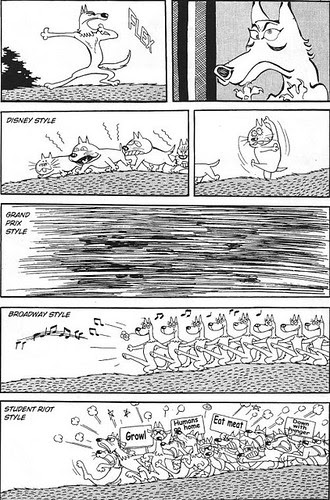 Hyoutan-Tsugi, Tezuka's recurring "punch-line" character, inserts himself into an Old-West-style showdown (the last two panels have been removed to avoid a spoiler):

There's tons more of that sort of thing, but I think I've gone on long enough. Suffice to say, I love Tezuka's comics, and this one is excellent. It's a great story, and I'm sure it will serve as a wonderful foundation for the rest of the series (whenever I get around to reading it). So now I've only got another eleven volumes to go...
Posted by Unknown at 10:08 PM