"The dialogue is terrible! But they mean every word of it!"

Today's Fourth World panel, from Mister Miracle #4, is from one of Big Barda's first fight scenes: 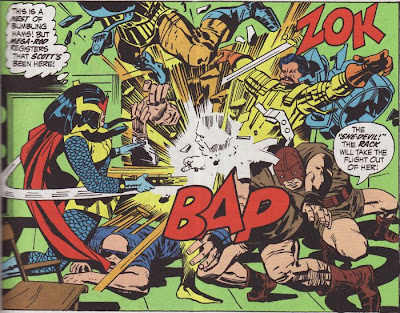 Awesome. It's like that guy's face is exploding. This continuation of the story from the previous issue sees Barda helping Scott escape from Doctor Bedlam's trap, in which an entire 50-story building full of people were dosed with the "Paranoid Pill", which turned them into crazed murderers. Hey, why not? In an amusing bit, some guys are shooting a movie featuring a medieval torture scene, and Kirby indulges in what seems to be some self-critique: 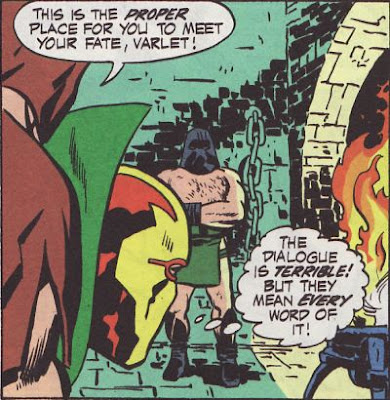 I don't know if it was a criticism back then, but these days I often hear people say Kirby's dialogue was awful. I don't agree, but this is a great way to look at it. It's sincere; these characters fit right into his crazy world, and they believe every word they are saying.

Finally, I want to spotlight this awesome panel, full of the same type monstrous visions from the previous issue: 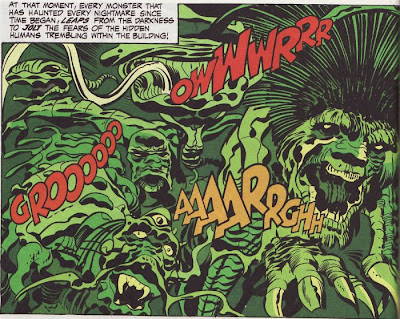 Yikes! It really seems like Kirby was just coming up with a lot of this stuff of the top of his head, and panels like this seem to confirm it. When he needed an image of horrific nightmare monsters, I wouldn't be surprised if he just put his pencil down and let the pictures flow right onto the page. At the risk of sounding monotonous, I have to say this is awesome.
Posted by Unknown at 4:12 PM