Hmmm. The issue for today's Fourth World panel, Superman's Pal, Jimmy Olsen #142 might be my least favorite yet. It's got a silly plot about vampire- and werewolf-aliens from a miniature planet, and I had trouble finding one panel awesome enough to spotlight. I decided on this one, because I like the perspective: 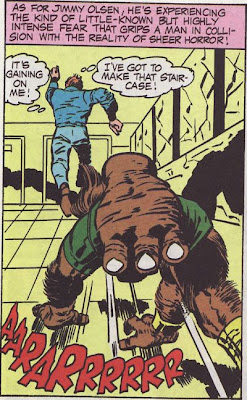 But it's also got some awkward coloring in the background, so whatever. There's also this bit, which I thought was cool:

But there's not much else worth mentioning in the issue. Bummer. But the next issue is titled "The Genocide Spray", which sounds awesome, so maybe it'll lead to something cool. We'll see.
Posted by Unknown at 9:45 PM