Therefore Repent!: It's a little late, isn't it?

Hey, I've got another review besides this one: Madman Atomic Comics #7, over on CB. And don't miss the latest Fourth World panel, right below this post. Enjoy! And enjoy this too: 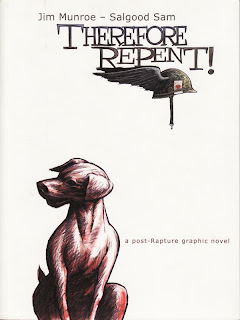 So, that "rapture" part of Christian mythology is kind of disturbing, isn't it (I mean, aside from all the other disturbing stuff in the Bible)? Everybody good (with the definition of "good" meaning you agree to say God exists, or whatever) gets sucked up into the sky, leaving everybody else behind, rejected, ignored, and pretty much left to kill each other and rot in hell. Good times! Jim Munroe and Salgood Sam explore a post-rapture world in this freaky graphic novel, and it's a weird, ugly place. For some reason, people seem to have developed magical abilities, and an army of angels outfitted in combat gear is going around killing anybody who practices this "witchcraft". Swell! In the middle of all this are a young couple known only as Mummy and Raven, so called because he wears bandages all over his body and she wears a bird mask over her head. They wander into one of the suburbs of Chicago (but not as far out in the boondocks as the place where I live) and take up residence, getting to know the people in the neighborhood, including a Korean kid who runs his family liquor store, the owner of a local bar, and a couple lesbians who run an interdimensional communications business called "She-mail". Also, their dog starts talking, and Raven starts developing strange ash-controlling powers. Who knows what's going on with this strange world.

So it's a fascinating, rich world that Munroe and Sam have created, but I did find it a bit hard to follow at times. A lot of the story is left up to the reader to infer, or references events and relationships that we don't see. Part of this might be due to the fact that the book is a sort of sequel to Munroe's novel An Opening Act of Unspeakable Evil (which began life as a series of faux blog posts, which are still online). Munroe also did a sort of prequel comic with artist Michel Lacomb (also viewable online). So it's not a completely standalone work, but I was able to follow it well enough, especially when it all came together for a very satisfying ending.

But really, I found the best part of the book to be Salgood Sam's art. I've seen his work before on the Image vampire-pirate series Sea of Red, but I didn't think too much of it. It wasn't bad, but it wasn't especially distinctive or interesting to me either. But here, he's working on a whole new level, sumptuously detailing dingy environments, expressive characters, and fantastical creatures. Being a sort of Chicago native, I loved seeing his work with cityscapes (and his depiction of the infamous "bean" sculpture in Millenium Park): 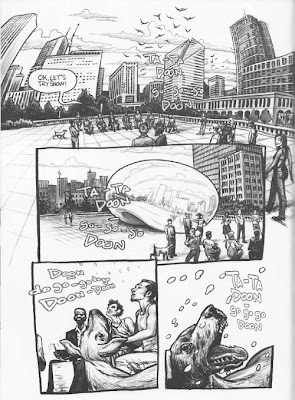 His depictions of animals are also great; the dog, who is a fairly major character, is expressive and even emotive while not seeming cartoony or anthropomorphized. He also comes up with some great layouts, like this dynamic shot of angels deploying: 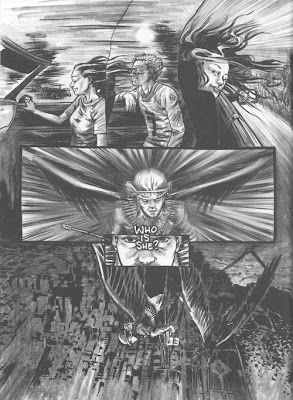 And I even find the "less-readable" layouts fascinating: 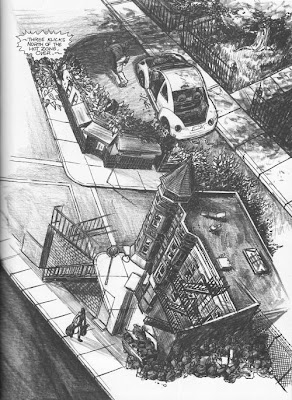 There are at least three different scenes sort of melting into each other there, and I'm not sure how it all works, but it's so well put-together, I keep coming back to it. I especially like the thick, but not oppressive, shading, which adds a nice texture to everything. The character work is pretty great too; I love the girl's expression in this bit: 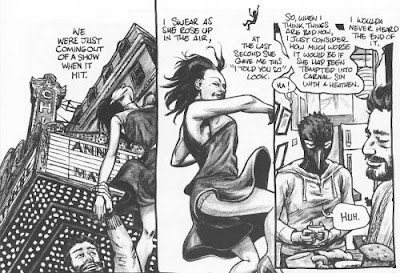 It makes for a funny/sad scene, and those nicely-defined and -detailed characters make for a good, human grounding to Munroe's crazy world. Finally, I wanted to point out one last bit that wowed me, in which Raven and Mummy have a shared vision that takes the form of the drawings in Mummy's notebook: 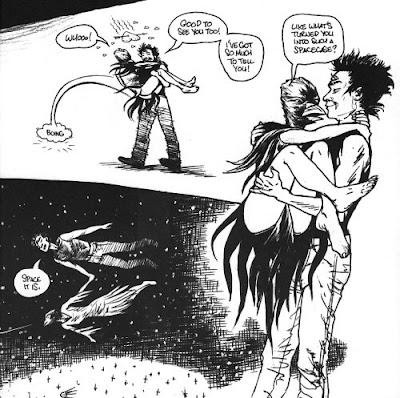 It's an effective shift from Sam's normal pencil-shaded style, and the sudden "open-ness" of the art is striking and effective. Nice.

So, yeah, I definitely dug this book. Any perceived storytelling deficiencies that I felt while reading were assuaged by the excellent ending, and the exquisite artwork (and well-drawn characters and fully-realized world) kept me going until then. It makes for a really good book, and I definitely recommend it to anybody who is interested in something a little bit outside the mainstream. Good job, guys.
Posted by Unknown at 10:49 PM