"These great steel doors! They're locked by complex systems!"

You know, when I do these posts of Fourth World panels, it seems I almost always focus on either action, wreckage, technology, or dialogue. I hope that's not getting monotonous. But here's another example of one of the above, from Superman's Pal, Jimmy Olsen #143:

Yep, it's the ol' Kirbytech! Gotta love the trippy colors. There are plenty of examples of the other types here though, including action with wreckage: 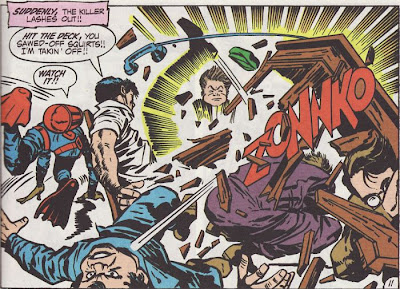 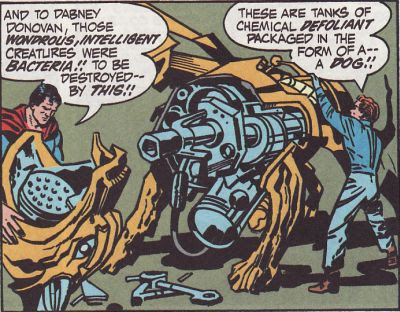 I love that last one. Why a dog? Why not? The plot of this issue is actually pretty cool, and it kind of justifies the last issue, which I didn't like as much. Superman and Jimmy discover a laboratory containing a miniature planet, which scientist Dabney Donovan has kept developing by projecting horror movies on its atmosphere, which is why the inhabitants have taken the form of vampires, werewolves, and, um, Frankensteins. If I remember correctly, Grant Morrison used a pretty similar plot in an issue of The Filth. Anyway, the scientist has decided to exterminate life on the planet, so he's doing so in the form of a demon dog that emits the titular "genocide spray" to exterminate life on the planet. That's pretty cool.

I don't know how much this issue has to do with the rest of the Fourth World saga, but it does have asides about Intergang (hence the incongruous Newsboy Legion panel up there) and the DNA Project. Hey, it's all cool. Next up: Doctor Vundabar's Murder Machine!
Posted by Unknown at 9:31 PM