Hmmm. I'm getting behind here, so hopefully I'll be able to write a bunch and catch up. We'll see how it goes. 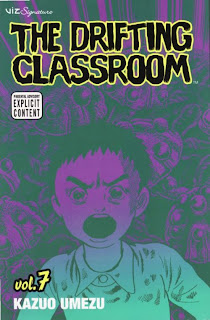 Wow. It's hard to come up with new things to say about each volume of this series, but that's not because it fails to engage, it's just that I'm not as creative in coming up with new content as Kazuo Umezu. I mean, crap, last volume saw an outbreak of bubonic plague, a mummy-based delivery system, and a giant (psychically-inspired?) flood. So how does Umezu follow that up? With a lot of worries about whether to eat the mushrooms that have sprouted up all over the place: 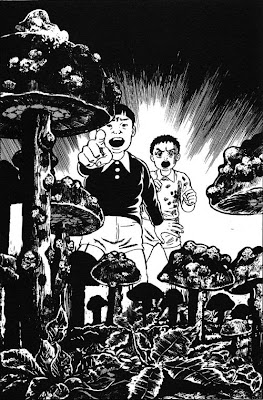 And a weird religious cult that eventually leads to a monster attack (I won't spoil the reveal on that one).

First things first: those freaky mushrooms inspire a lot of debate about their edibility, some of it violent: 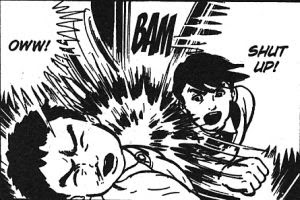 The students (against the wishes of our good-hearted hero, Sho) end up deciding to force-feed them to Sekiya, the evil adult delivery man who reverted to an infantile state after facing an imagination-monster (I love describing this stuff). Hmmm, commentary on the proper treatment of prisoners and/or criminals? I'm probably reaching there, like usual, but it does come back to bite them on the ass when some abuse leads to one of those convenient memory-restoring head-bumps: 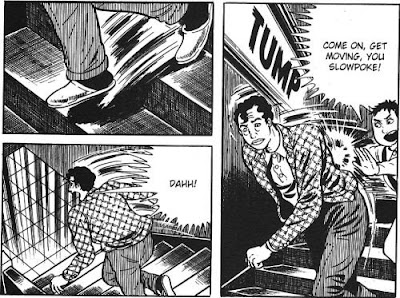 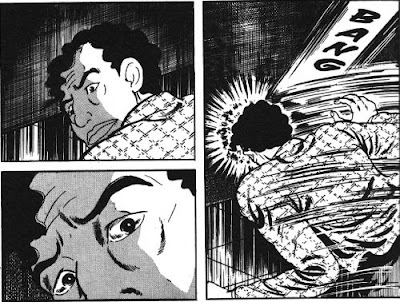 Oh, snap, that's not going to turn out well. Anyway, through hard-to-explain circumstances, a chubby kid ends up eating the mushrooms, and soon enough, he's running around like a loon, insisting that they're tasty and everyone should join in: 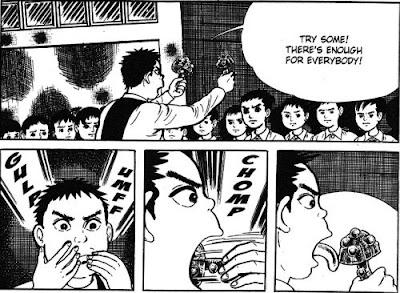 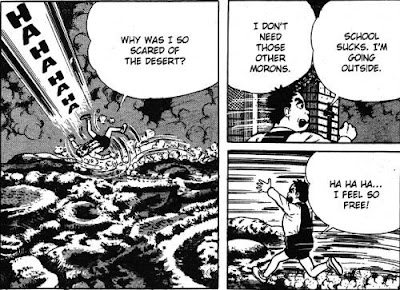 It's the classic case of peer pressure; "Come on, man, all the cool kids are doing it!" Like everything else in the book, you know this won't turn out well.

Later, Sho and the gang decide to use a bust he created of his mother as a goddess, giving the kids something to pray to. I don't know if this is Umezu's intent (isn't ancestor-worship prevalent in Japan?), but I see this as a demonstration of the ridiculousness of religion. Although it's also a look at religion's usefulness, since it gives them something to think positively about, rather than focus on the relentless hopelessness of their situation. Of course, this devolves into violence, when a cult of mushroom-eaters splits off from the main group, choosing instead to worship a one-eyed monster. And wouldn't you know it, the monster shows up to terrorize everyone (and possibly welcome its mutated worshipers). Classic. That plotline will have to be resolved later, however; it looks like the return of the evil Sekiya will take precedence for now. I'll have to get to the next volume soon.

But I also have to mention one instance of gruesomeness that Umezu brings here, as we get glimpses of the transformation that befalls kids who ate the mushrooms: 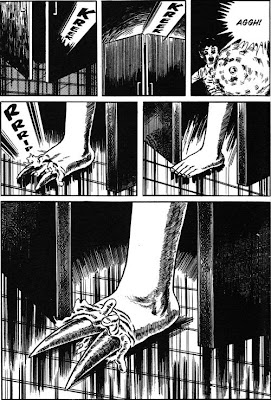 Yikes. Those dangly little toes are freaky. I love the energy of Umezu's art, whether it's the swooshing motion of the kids as the run around and fight each other, or their constant wide-open mouths as they scream about everything that is happening. And the oppressive darkness really emphasizes the horror of their situation. He's really established an anything-can-happen atmosphere, so you're never surprised when some batshit-crazy stuff goes down. Or rather, events surprise you, since it's impossible to predict what will spring forth next from Umezu's psyche, but nothing seems unrealistic. Umezu can sell this story so well, I believe it fully, and even though I'm repulsed, I can't look away. Awesome. I don't think I'll be the same after reading this series, but it's totally worth whatever emotional scars I suffer.
Posted by Unknown at 5:52 PM