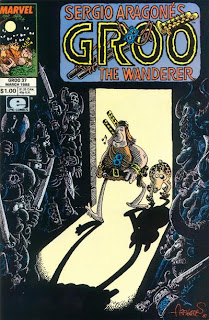 The world of Groo isn't a place one would wish to live, no matter how great the chance of witnessing a massive fray, the toppling of a huge man-made structure, or a horde of people angrily pursuing a funny looking fellow and his dog. No, for the common man, this is a place of uncertainty and terror, plagued by the constant danger of ruination stemming from any number of sources, most (but not all) of them related to a wandering buffoon. This issue demonstrates that well, and it manages to show that as destructive as Groo can be, his reputation is such that the mere threat of his presence can easily upend the fragile ties holding society in some sort of order.

This issue seems to be tending in the direction of social satire, pointing out how easily the bonds of civility and common decency can be severed when people come under the perception of a threat. Groo doesn't actually do anything more than bumble around attempting to hunt some game with Rufferto in a subplot that ensures his presence in the comic bearing his name. The real action happens elsewhere, as a peaceful village falls into chaos when word reaches people that Groo is on his way there. Sergio and Mark depict the wave of panic that ripples out from this news, and they make it only slightly exaggerated. People misinterpret the news, and rumors spread that taxes are going to be raised. The king's army is summoned, which prompts people to send women an animals away. This causes businesses to close down, lowering property values. Soon, real estate developers are buying up land, gambling and prostitution establishments are moving in to take advantage of the army's presence, militias are being formed to combat the disruptive threat of the army, and fighting is breaking out in the streets. It's a believable cascade of consequences that all rise from the simple possibility of uncertainty, a nice reminder of the tenuous grasp on civilization that we all have, and the thin thread that separates us from chaos.

Sergio's cartooning is as excellent as ever here, full of the earthy details that I like so much. The scenes within the village are wonderfully detailed, starting with the sorts of scenes that I always like to see of people living and working, just trying to survive in a harsh world, before things steadily slide into panic and lawlessness, all depicted with that energetic Sergio flair. There's one moment that I found especially hilarious, as everyone, in the midst of fighting, realizes that they are actually mad at Groo and shouts at each other to stop:

The halted motion in that panel just kills me, especially the guy about to be stabbed by a spear.

And even though Groo is sidelined from the main action, he gets some amusing scenes, including this bit in which he attempts to trap some prey: 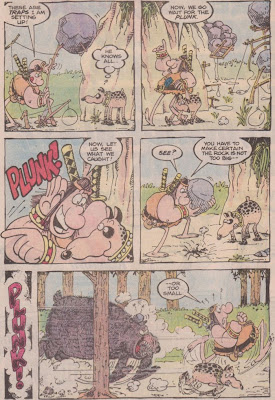 This is a really strong issue, full of sharp comedy and hilarious art and dialogue. It could be faulted (or maybe just not considered platonically ideal) for separating Groo from the primary plot, but as a sort of experiment that ventures away from the protagonist and examines the full extent of his effect on the world, it's impressively thorough, and a nice glimpse of the direction toward satire that the series can take. Definitely a highlight in the ongoing Groo journey.

This issue's stats:
Recurring characters: None of the regulars make an appearance, but the Groo Crew is cast as a bunch of degenerate "wine merchants and gamblers" come to ruin the town:

Hidden message(s): One of the property-value-diminishing businesses is called the "Hidden Message Gambling Casino": 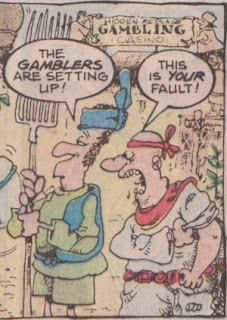 Moral: "Small disasters cause panic. Panic causes large disasters."
Spanish words: A neighboring village is named Aprovecho, which means "I take".
Running jokes: Groo is still considering eating Rufferto.
Mark Evanier's job(s): Recoctor
Letter column jokes: A reader named Steven Haydusky earns Mark's ire by saying that he thought the blue thing on Groo's chest was a pop tart and asking if Mark ever said that or if it was "a pigment of [his] imagination." Mark says that if he wants his letter printed, "you'll have to learn to stop being funnier than me." Mark also repeats the joke about the price of Groo going up because they had to order a new joke, and when a reader starts writing a letter in praise of X-Men #217 before catching himself and switching to praise of Groo, he replies, "X-Men? Do they still publish that?" which is funny because they do.
Posted by Unknown at 6:00 PM