Whoops, I was silent there for a couple days. But now I'm back, baby! And I have one review elsewhere: a look at Dan Dare #3 over at Comics Bulletin. Also, I noticed an interesting news story: Marvel has made a deal with the French publisher Soleil to publish their work in the U.S. I don't know much about Soleil's stuff, but I'm always very curious about European comics. I kind of missed out on most of the books from the partnership between DC and Humanoids a few years ago; I was just getting back into comics at the time and my tastes hadn't gotten as adventurous as they are now. But this time I'm ready for it! Bring on the wacky French shit, Marvel!

Okay, on with the review: 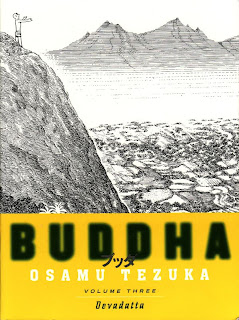 Three volumes in to Osamu Tezuka's historical epic, and I think I'm starting to see what he's going for. I'm glad this isn't a dry history lesson about Buddhism, but rather a rousing series of adventures through ancient India; but what else should I have expected from a wackmeister like Tezuka? I will say that I'm really digging the crazy stories he's telling here, along with his style; if he decides to spend eight pages on a series of scenes of animals eating each other, he goes for it! 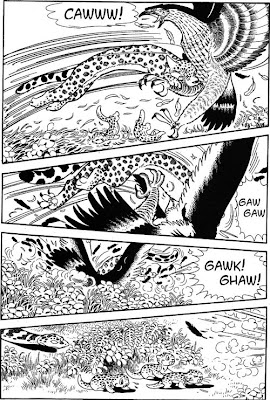 But while he often indulges in his trademark goofiness (lots of slapstick, but not as many anachronisms or attacks on the fourth wall as in other volumes), I'm starting to realize how well-paced the thing is. While we see the development of Siddhartha's spiritual philosophy, we get side narratives focusing on minor, tangential characters that illustrate the themes of the story.

In one of the major parts of this volume, we follow young Devadatta, the son of the evil warrior Bandaka from the first two volumes. Through a variety of fairly harsh plot developments, he ends up being raised by wolves and living as an animal. So of course he ends up running into Naradatta, the monk from the first volume who had lowered himself to an animal. This leads to some fascinating discussions of man vs. animal and the harsh nature of, well, nature: 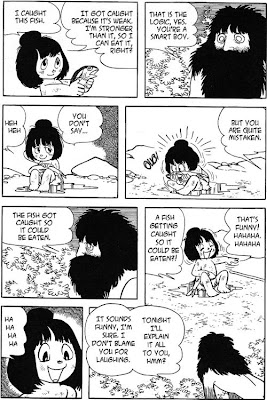 Naradatta's philosophy reminds me of The Lion King's "circle of life" theory, but wasn't that movie kind of a rip-off of Tezuka's Kimba: The White Lion? If so, I guess it comes full circle here. How fitting.

But as cute as Tezuka draws them, this series isn't just about animals, so Devadatta has to end up back in man's world. Thus, we get to see him try to incorporate himself back into society and learn all about man's crazy ways, and finally set out to be strong and powerful. Is man actually more savage than the wild beasts? Eh, maybe, but he's also dumb, falling for Devadatta in drag (it makes at least a little bit of sense in context). Really, this bit emphasizes man's propensity for betrayal and disrespect of other humans. Interesting stuff, and I'm quite curious as to how Devadatta will play into the rest of the series.

But while the Devadatta bits are quite interesting, the heart of this volume is about Siddhartha (who actually gains his "Buddha" moniker this time around) becoming a monk. Right off, he has some problems with the idea of "ordeals", in which monks physically punish themselves in order to purify their spirits (or something like that). He gets to learn this from Dhepa, the monk who burned out his own eye in the last volume. Tezuka presents the reasoning behind these ordeals pretty fairly, but he also shows how Siddhartha doesn't agree with the idea, especially when they discover a dead monk who had allowed vultures to eat him alive (in an interesting bit of doubling, Tezuka has Devadatta subjected to this punishment in the next section of the book). What's the point of trying to purify yourself if you're going to die in the process?

Later, Siddhartha and Dhepa have some other adventures, including a visit to a city that has banned Brahmin after a deadly fever swept through the population and the monks' religious rituals were powerless to stop it. This leads to an interesting situation, but also another chance for a woman to be overpowered by Siddhartha's captivating manliness. I assume he's very sexy; this is the third woman so far to fall for him. In this case, it's the rich, Afro-haired Visakha: 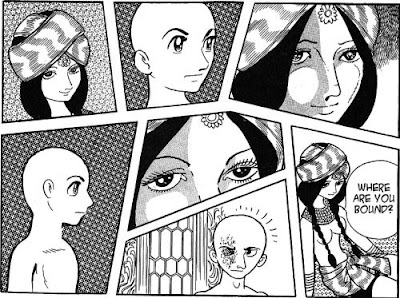 She's a rich woman who kidnaps him and tries to seduce him, only to have them torn apart by Tatta, Migaila, and their gang of brigands. Tatta is trying to convince Siddhartha to return to his kingdom and become a great leader, but Siddhartha only wants to pursue spiritual purity. So Tatta and his gang burn the city down and ravage the population. Bastards. This eventually leads to some pretty cool action scenes, and Siddhartha pledges to return as kind after ten years of monking. It seems like ten years after this volume will be a momentous time; it will also see the return of Devadatta (according to a bit of narration) and the prophesied death of another character. I don't know how much story will take place in the meantime though.

One other interesting character in this volume is Assaji, a snot-nosed kid that follows Siddhartha and Dhepa around, trying to be a monk. In a hilarious scene, his parents try to get the monks to take him in early in the book : 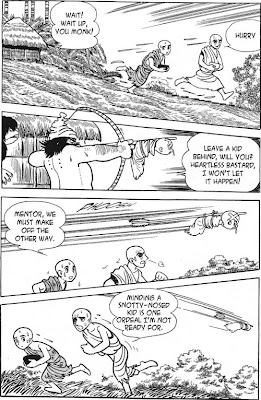 And they spend most of the volume trying to elude him, because Dhepa doesn't think he has what it takes to survive ordeals. But I figured he would end up being important, since Tezuka has a tendency to introduce what seem like throwaway characters who turn out to be more pivotal than originally expected. Assaji is an interesting one; he seems like he might be a reference (visually, at least) to Tezuka's The Three-Eyed One. I don't know what that means (but I would love to read that manga and find out, so somebody please translate it!), but Assaji eventually becomes wise beyond his years, gaining the ability to see the future. It's an interesting development, and Tezuka gets some exciting scenes out of it: 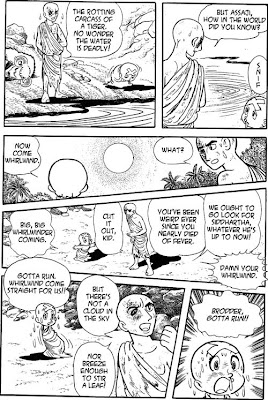 It should be fun to see where he goes with this idea, and what other themes he will explore in future volumes.

So, that's the third volume. It doesn't seem like I have any insights or deep thoughts this time around, but I still want to praise the wonderful storytelling. It's page-turning reading, and it makes me want to get a book about the life of Buddha and see how much is actual historical fact, how much is legend, and how much Tezuka just made up. But whatever the case, I'll be raptly poring over every volume I can get my hands on.
----- 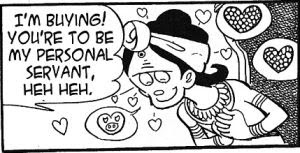