Miscellaneous stuff, or, an effort to keep the page fresh

I've been busy this week, but I wanted to write something on here, dammit. So here's a few short something-or-others:

I don't usually regurgitate press releases, but I got an interesting one from Viz the other day about some upcoming titles. Along with a couple that I've been trumpeting (Sand Chronicles and Honey and Clover), there's a new series from Takeshi Obata (the artist of Death Note and Hikaru No Go) called Ral Ω Grad. It sounds enjoyably insane:

In the midst of a meaningless war, a child named Ral is born during a bloody battle at the cost of his mother's life. From this baby’s shadow comes forth a huge and powerful dragon named Grad, which lays waste to the landscape within minutes. A quick-thinking knight locks the baby in a cage of darkness, where he grows to be a young man, knowing only the kindness of his young female tutor named Mio, but never seeing her face. One day an army attacks and the people of Sphaein are put under siege by horrendous monsters knows as Shadows. With the castle walls collapsing and their doom within sight, the people are persuaded to set Ral free knowing he also has a Shadow within him—the large blue dragon. Released from his black cell, Ral finally meets his beloved teacher face-to-face and discovers there are differences between men and women…differences he deems worth fighting for!

I don't know what most of that means, but it sounds like an enjoyable read, and Obata's artwork is really good, so I'll probably be watching for it. Also of note is a series called Switch, which is some sort of drug-related crime drama from a Japanese duo that call themselves Naked Ape. Here's the cover of the first volume: 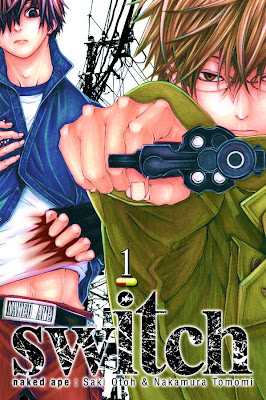 On a completely unrelated note, I've been reading Beyond Palomar, the third collection of Gilbert Hernandez's work from Love and Rockets, and it's really good, of course. Normally I would wait until I finish reading before talking about it, but I noticed one bit that I thought was really cool, and I wanted to get my thoughts down before I forgot.

In the graphic novel Poison River, Gilbert details the pre-Palomar years of his character Luba's life, and at this point (about 20 pages into the story), she's still a little girl being cared for by her out-of-work father, a poor manual laborer. A two-page sequence begins with the following image:

It's a striking cityscape, bright and exciting and full of possibility. We get a few panels of bustling activity before we spot Luba and her father, Eduardo; unlike seemingly everybody else around them, Eduardo is poor and beaten, begging for money or laying passed out on the sidewalk (Luba, being too little to know any better, is oblivious to their plight). It's a striking contrast to the promise of the opening image, and Hernandez seals this in our minds with a closing cityscape:

Unlike the previous one, which is full of crisp, straight lines and bright lights, these buildings (and sky) look grungy and decayed. The promising possibilities have given way to harsh reality; it's an effective way to show how far Eduardo has fallen (even if he wasn't especially high in the first place).

So, only 20 pages in, and I'm already moved to enthuse about Gilbert's artwork and storytelling. I could probably go on and on (hell, that first image makes me want to talk about the way he suggests the shape of the buildings without actually detailing them; damn, that's incredible), but I should probably try to actually finish the book, and then try to filter my thoughts into something more succinct and focused. But nevertheless, the more of his work I read, the more I'm convinced he's a true master.
Posted by Unknown at 5:58 PM