Yotsuba&!: She is cute

More manga (and I've got more waiting in the wings). Sorry, fans of American comics, I'll try to please you sometime! 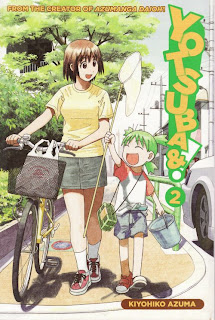 I must be turning into a softie in my old, old age (29), because I, like the rest of the internet, have fallen head over heels for this cute little girl and her gang of followers. Whodathunkit? This volume sees her work on her drawing skills: 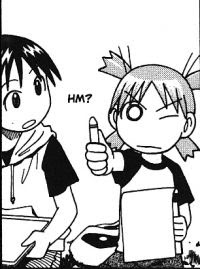 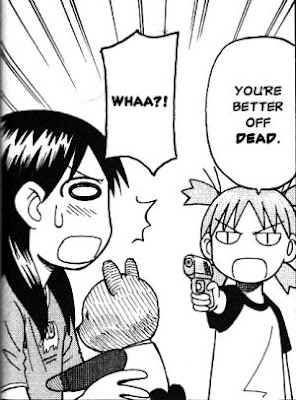 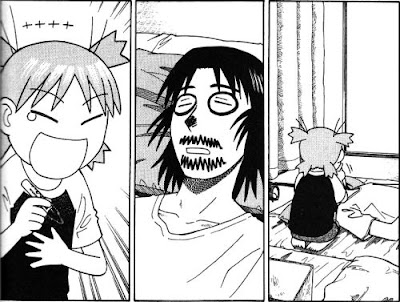 Attempt to teach people how to swim: 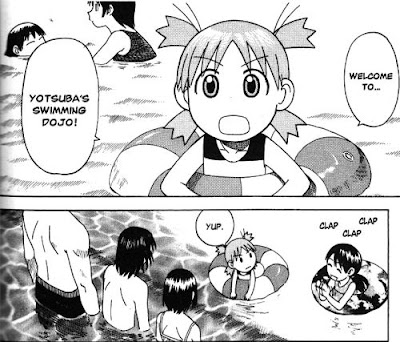 Get involved in a fight involving frogs and giant eyeballs (it makes sense in the context of the story. Sort of): 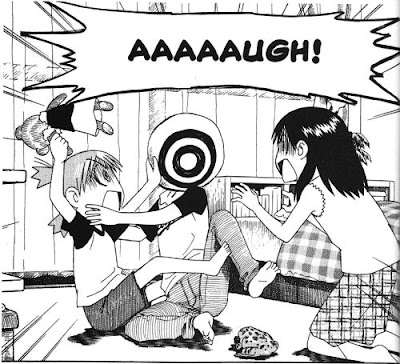 And plenty of other hijinx. It's utterly charming, and it would be easy to just post a myriad of panels and say, "How cuuuuuute!", but I strive for something more here. So how about some half-assed analysis of why Azuma is so effective at delivering the comedy of this series?

Well, first off, his style is really clean, but also quite simplistic. There aren't a ton of details cluttering up the panels; we're free to focus on the simply-rendered character of Yotsuba. Maybe it's just the lack of a nose, but she seems to get less detail (at least in her face) than the other characters, so that makes the big eyes and mouth stand out even more. Her emotions seem so pure and deeply felt, which is something we associate with children. And Azuma wrings a deceptive amount of subtlety out of the small changes in her expressions. I could (and someday might) take up a whole post just pointing out all the different ways her eyes are depicted, from simple black circles, to sparkly black circles, to downward-angled half-circles. Azuma knows exactly which variation to use to get across her emotional state, and I fall for it every time.

The other thing he does so well is the depiction of the physicality of the characters. The way they hold their bodies and the seemingly easy grasp of motion are incredible. I love this bit where Yotsuba wants to join in when everybody is getting pushed into the pool: 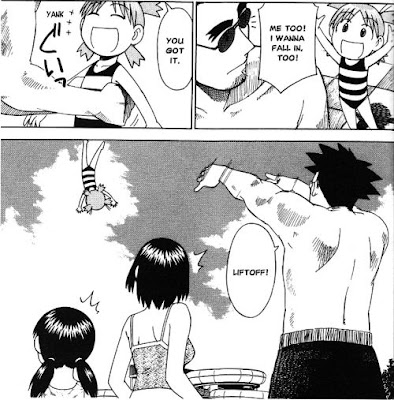 Jumbo, being so large, can easily pick her up and heave her through the air, and Azuma really makes you feel it. The amount of space between her and the bottom of the panel (along with the clouds in the background) emphasizes and exaggerates how high she is, and she seems especially small, making it look like she's really flying. Her upside-down position and the graceful curve of her body really make her look like she's moving really fast. It's just beautifully done, and the whole book is full of this sort of thing.

On the (non-art-based) storytelling front, Azuma also really gets you into the comic with the way he defines the characters. It's another seemingly simple thing, but he pulls it off with panache. Each character has their own personality, and it comes out in the way they interact with each other. Most of the time we see it from how they react to Yotsuba and her steamroller-like way of taking over every moment, but sometimes it comes out in other ways too. One of my favorite aspects is Yotsuba and her dad Koiwai's relationship; they have these little games they play that they don't need to explain to anybody else, including the reader. We just get to see them start goofing around, and it's utterly charming. In the first volume, Koiwai put a pair of boxers on his head and started attacking Yotsuba; here, he gets her to join in the "daddy dance": 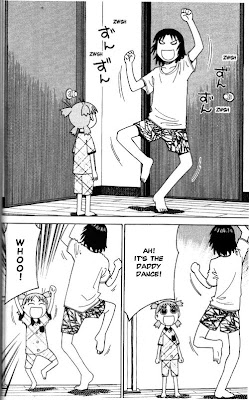 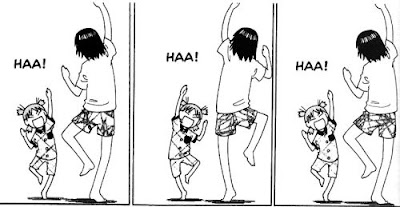 Come on, how can you resist that sort of cuteness?

So, yeah, it's super-fun stuff. I could probably try to go into more detail, but I don't want to overthink things; sometimes it's just best to enjoy the fun, right? I know I've been digging it; I already bought the third volume, and I'm sure I'll soon devour the others that are available. Go Yotsuba!
Posted by Unknown at 7:59 PM