I think I'm actually getting caught up on reviews here. Wow.

Amulet, Book One: The Stonekeeper
By Kazu Kibuishi 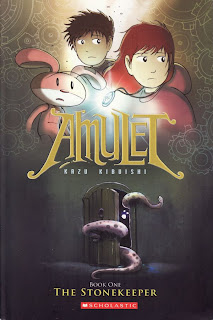 Why is it that stories aimed at kids always have to be so tragic? I suppose there is a need to eliminate authority figures, allowing the younger characters to empower themselves without relying on a guardian figure, but it makes for a disturbing trend in which most any protagonist of a children's fantasy novel is an orphan whose parents died tragically. But I guess you gotta set the story up somehow, so parental death is a good means to that end. Kazu Kibuishi's new graphic novel jumps right into those ranks, starting off with a scene in which Emily, his main character, suffers through a car accident that claims the life of her father. It's a well-done scene, and it sets up the main story of the book, in which Emily, her mother, and her brother Navin move to an old house that belonged to her great-grandfather, an inventor named Silas. Unsurprisingly (since this is a fantasy story), the house holds some secrets, starting with a neat-looking amulet that Emily decides to wear: 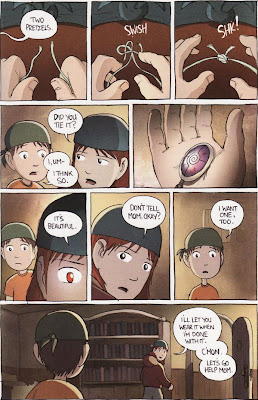 As readers, we can probably expect this simple act to have dire consequences, and sure enough, the amulet turns out to have magic powers, and Emily and Navin are soon plunged into some sort of subterranean world, trying to rescue their mom after she gets eaten by a tentacled monster. Their quest leads them to discover a strange mansion, where they find their great-grandfather's true legacy: a horde of cute robot helpers and some awesome sci-fi technology: 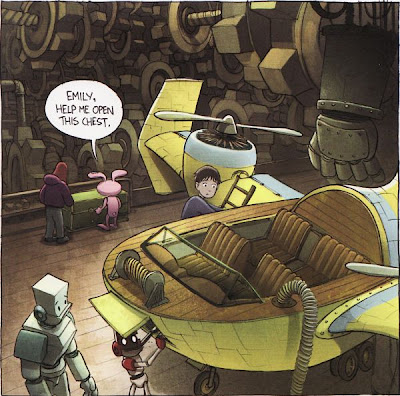 This leads to some exciting chase sequences, and plot twists that mostly set up events to come in future volumes. Those should be exciting to read, but there's plenty to mull over in the meantime. For instance, Emily is presented with the idea that her magic amulet has some amazing powers, including the ability to turn back time. Will she eventually be given the option to change the past and bring her father back to life? At the very least, the indication is given that she will get the chance to become the ruler of this underground (otherdimensional?) kingdom, but she really just wants to save her mom and return with her family to their regular life. So that choice looms uncertainly in the future. And then there's the possibility that there's something sinister going on with the amulet; it often speaks to her, prodding her to use her powers in some way or another; what's to say that it doesn't necessarily have her best interests at heart? I'm sure more will be revealed, and Emily might have to deal with the old idiom about absolute power and corruption.

Kazu Kibuishi (who is probably best known for creating and editing the Flight anthologies, but also writes and illustrates the beautiful webcomic Copper) definitely has a grand scope in mind, and it should be fascinating to watch him develop this world in future volumes. One thing is certain: that world will be beautifully illustrated in his somewhat manga-esque style. His rounded human characters are expressive and very relatable, but the other various creatures are also quite appealing. Miskit, the pink stuffed-rabbit-thing on the cover, is a definite standout; I love his Bone-style monobrow that floats over his forehead: 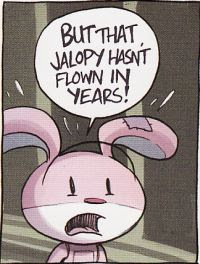 The environments are also quite lovely, full of gloomy atmosphere and weird, otherworldly features like giant mushrooms and strange creatures: 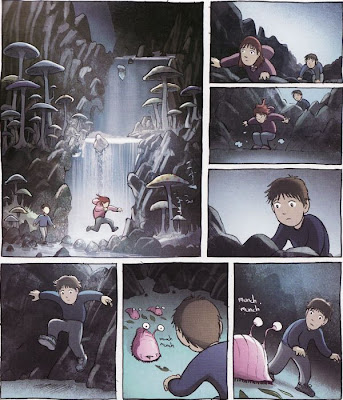 Kibuishi's colors are a big part of the look, adding a lovely glow to the world and giving characters real weight and texture. He's one of the new generation of cartoonists that use digital coloring techniques in innovative ways to come up with the kind of art that wouldn't be possible even a few years ago.

And don't forget about the monsters! The tentacled beasts aren't quite as scary as Ben Templesmith's nasty demons, but they make an effective threat for a couple of scared kids: 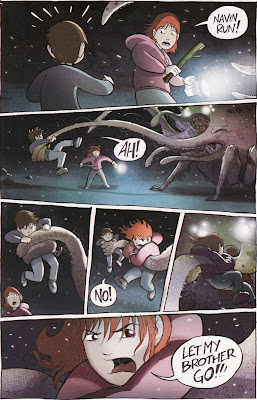 As you can see from these samples, Kibuishi also uses some of the storytelling styles of manga, angling his panels during action scenes and employing speed lines and similar effects. It's a nice synthesis of Japanese and Western styles, making for a unique book with the kind of look you can't find anywhere else.

So, it's a really nice kids' book. Sure, the story is fairly simple (so far), and some might view it as somewhat derivative of other fantasy works (Narnia, Harry Potter, The Lord of the Rings, and all the other usual suspects spring to mind), but I really enjoyed it, and I can't wait for the next installment. Keep 'em coming, please!
Posted by Unknown at 7:59 PM