The Spirit: Oh, now it gets good

Man, I've got plenty of books to talk about, but I'm going to go ahead and waste a post looking at a single issue of a series. But first, I'll link to my review of The Evil Dead #1 over at Comics Bulletin (formerly Silver Bullet Comics). I also contributed to a "Sunday Slugfest" of Atomic Robo #4, but that doesn't appear to be up yet. I'll link to it when it goes up; I wrote some other stuff for them today, so I should have some other stuff to point out in the next few days. Anyway, here's my latest diversion:

The Spirit #12 By Darwyn Cooke 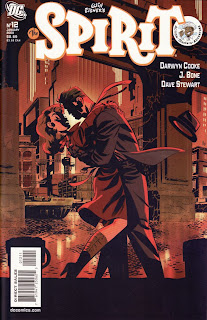 I gotta say, while I've enjoyed Darwyn Cooke's run on The Spirit, it hasn't blown me away to the point where I went into mourning when it was announced that he was leaving the title. Sure, the stories have been fun, and the art was very nice, but there was nothing that made me want to enshrine Cooke as Will Eisner's heir apparent. Until now, that is. This final issue of Cooke's run has been everything I hoped for, paying tribute to Eisner's stories and style while working on its own as a moving and exciting tale. It figures that Cooke is leaving now that he's finally shown what he can really do (not that I ever doubted him or anything).

But it's a hell of a send-off. This issue is an adaptation of the original two-part story that introduced the Spirit's lost love, Sand Saref, and it's a beautiful story, especially in the flashback sequences where Cooke emulates Eisner's sepia-toned art style of A Contract With God: 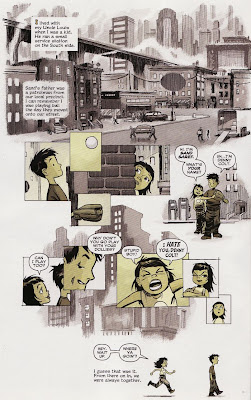 The cityscapes and rain-soaked imagery are pure Eisner, and in some places, Cooke even manages to replicate Eisner's character art: 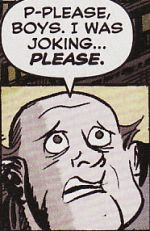 As you can see, the page layouts are possibly a little more "modern" (or maybe just more Cooke-style) than Eisner usually used (not that Eisner was any slouch at ambitious layouts), but Cooke still managed to capture Eisner's unique style to the point that my breath caught in my throat as I was reading it. Damn. And hey, he even managed to draw water like Eisner did:

So overall, the issue is a good reworking of the story, using some of Cooke's characters (which may have been established before he got his hands on the character, but I wasn't familiar with them) in an organic way and really emphasizing the "lost love" aspect of the Spirit and Sand's relationship. One thing I have enjoyed about Cooke's run is the adult sensibility he brings to the stories; previous issues have seen regular violence and plenty of casual profanity, and this issue includes a fairly explicit sex scene (for a non-Vertigo DC comic, anyway):

But none of these things are gratuitous; Cooke takes the age and maturity of his intended readers for granted, and I like that. So now that his run is over with, I'm finally sad to see him go. We'll see if Sergio Aragones, Mark Evanier, and Mike Ploog can live up to what he started. I'm sure their run will be funny, but I'm hoping they'll put as much heart into it as Cooke did.
Posted by Unknown at 9:11 PM