Nana: Ah, the itch has been soothed. Also: Holy crap! 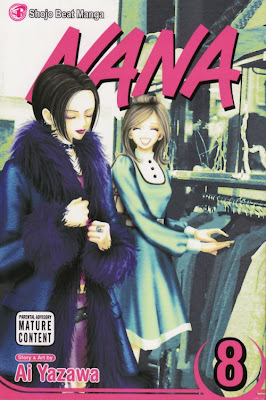 In Dirk Deppey's "best of 2007" list at the other end of the link above, he mentions that the entirety of Nana up until this volume was essentially prologue, and a single event in this volume changes everything. And, man was he right. I won't spoil it, but the big twist here is a fucking amazing one, yet one that fits the series incredibly well. It's really just raising the stakes for the characters, and Ai Yazawa does a masterful job of pushing her characters through these compelling stories.

But let me back up; Nana is probably my favorite manga series at the moment. I've been following it faithfully since the first issue of Shojo Beat, and I was horribly upset when the magazine stopped serializing the series (yes, I'm a dork). However, after reading this volume, I understand the decision; not only does the sex get more explicit: 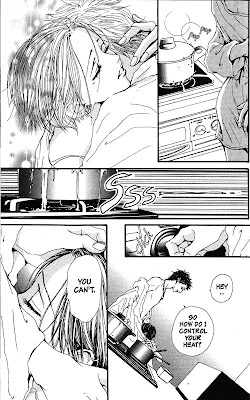 But the entire dramatic underpinnings of the series shift to a more adult sensibility, one that doesn't fit the intended teenage audience of the magazine as well. And now that the big twist has happened (I'm trying very hard not to spoil it here, but I might slip), I can see how the themes have been subtly shifting to more mature subject matter over time. Rather than the teenage worries about finding a boyfriend or an apartment, Yazawa has slowly introduced ideas like keeping a steady job in order to be responsible and pay the bills, or how to manage a long-term relationship. It's fascinating to look back and see the steady growth of the characters as they become adults, and I'm sure we'll get to keep watching it over many future volumes.

But even avoiding the spoiler (rrrrrgh!!), the series is great fun to read. The characters are just so well-realized, and whatever happens, it's impossible not to enjoy watching them bounce off each other. One highlight of this volume is watching Nana (that's Nana Osaki, the rock star, as opposed to Nana Komatsu, otherwise known as "Hachi") try to take care of Hachi or boss her bandmates around. She's got a hard-edged punk attitude, but we get to peek under her shell somewhat here. But the outer image is fun too: 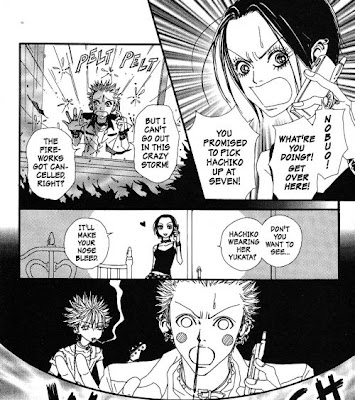 There's plenty of other characters and scenes I could talk about, but I'm really trying not to spoil things. All I'll say is that it gets incredibly dramatic, and I was turning pages with rapt attention, wanting to know what was going to happen next. Yazawa has a great sense of pacing, springing events and revelations and confrontations on readers in such a way as to create maximum drama. Her expressive artwork doesn't hurt either, and I love some of the tricks she uses, like this panel of Hachi's rock-star (ex?)boyfriend Takumi eating some "plebian curry": 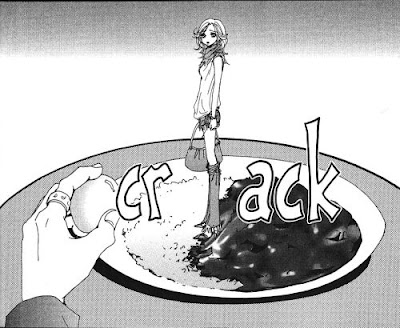 That's actually a scene transition from higher up on the page, but it's structured to look like Hachi is standing on his plate; he kind of considers her to be "beneath" him, little more than a fling. And when you read that in context, it's pretty devastating and sad.

So I'm definitely still a fan, and I can't wait for the next volume. Where can Yazawa go with this? What's going to happen next for our heroines? How will they cope with these events? Damn, this is some effective soap-operatic storytelling, making readers feel like they have to keep reading! I'm hooked; don't be surprised if you see me strung out on the floor of Borders' manga section.
-----

So that's Nana. I managed to get through the thing without revealing anyth....All right! I can't stop myself! SPOILERS SPOILERS SPOILERS!!!! Holy shit! Hachi's pregnant! Holy shit! I thought shojo manga was all lighthearted and fun, full of drama, but nothing that can't be worked out by the end of the chapter. It'll all be roses, and the heroine will be able to run away with the prince, right? Well, suddenly we're hit with a very adult situation: Hachi is pregnant by the guy she wanted to break up with, Takumi. He's a playboy, and he's not going to want to get tied down with a kid. Plus, she was falling in love with Nobu, and she wanted to start a relationship with him; what the hell is she supposed to do now? Yazawa spent seven volumes working her characters into the perfect positions for this revelation to have maximally devastating consequences, and (as far as I can tell) she's refusing to take it lightly and treat it as a frivolous obstacle. The book suddenly got a lot more grown-up, and a hell of a lot more compelling (no mean feat; it was already pretty un-put-down-able). I'm fascinated by this choice, and what this means for the future of the series. Damn. Damn. Yazawa just made a fan for life. I am seriously on the edge of my chair waiting for the next volume.
-----

Okay, that's the real ending. Sorry if things got a bit incoherent there. Anyway, join me tomorrow for a sophisticated discussion of something less emotionally reactionary and more intellectual, like Chris Ware's Acme Novelty Library. Or maybe I'll just post gory panels from MPD Psycho. Whatever.
Posted by Unknown at 10:49 PM