Holy cow, two reviews in one post? Lets see if that actually happens. But first, a quick blurb about a dumb movie:

I watched that silly Korean movie Dragon Wars, and it was terrible. But also pretty enjoyable. For one, the plot made very little sense and mostly consisted of the wooden leads (who are two of the least charismatic actors I've ever seen) being repeatedly chased by a giant snake/dragon. There are some fun bits though, especially when an army of dragons and other beasts attack Los Angeles and have a war with the military, leading to scenes of dragon/helicopter dogfights in between skyscrapers. And the climax, in which a good dragon and an evil dragon have a big wrestling match in the middle of the desert is also enjoyable, just because it's so stupid. But the best part is probably Robert Forster's turn as a reincarnated kung fu master who keeps morphing into other people and showing up out of nowhere to save the day (or deliver exposition). All in all, it was a stupid, ridiculous, enjoyably awful movie. Check it out, if that seems like your kind of thing.

Or go watch Cloverfield. That one's much better. I won't go into details (since I'm sure you've heard all about it already), but it was really good. And not in an good-bad way either; it was excellent. See that one, if you have to choose between these two. 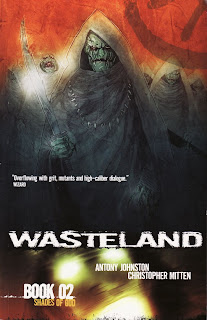 So here's my dilemma with this series: it's quite good, but I don't know if I want to keep reading trades or start buying it on a monthly basis. I already have to buy single issues here and there, since the standalone stories that go in between story arcs aren't being collected in the trade paperbacks, and there's "backmatter" material in each issue that's not being collected either. And the other problem is, the long wait between trades makes it harder to get up to speed on the story; it took me couple chapters into this second collection before I was able to recall who all the characters were and what their status was. So I'm thinking I might want to switch to getting the monthly issues. Also, the story is exciting, and I don't want to have to wait too long to keep reading it.

But that's just pointless decisions about my reading habits, so I should emphasize that this series has gotten quite good. I think I gave the first volume a "modest recommendation", but that has morphed into a wholehearted "Read this!" now that I've read more of the story. Antony Johnston has really laid the groundwork and figured out an entire world of different cultures, races, and religions in this futuristic, um, land of waste. It takes some attention to try to keep it all straight, but it's totally worth the effort. Once I got back up to speed on who everyone was, I was quite immersed in the various political moves, betrayals, escapes, power plays, and fights that go on here. And that's not to forget the slow revelation of the book's backstory, in which we get a glimpse of how this wasted land came to be. Maybe; I'm sure there will be many twists in store.

So the story here is that the group of sun-worshipers ("sunners") from the first volume have been enslaved in the city of Newbegin by the ruling faction of the city, who worship their leader, Marcus. But Michael, the "ruin-runner" who alternately helped and aggravated the sunners in the first volume, shows up to help out, and he manages to mess with Marcus's head and foment a slave rebellion while escaping with heroine Abi to set off on a journey for the fabled land of A-Ree-Yass-I. There's also the small matter of an attack on the city by a huge mass of the nasty, monstrous "sand-eaters". It's exciting stuff, with plenty of twists and turns; I have no idea where the story is going to go from here.

Christopher Mitten does a great job of bringing the old, dirty world to life, and although there are occasionally some action sequences that are somewhat hard to follow (for me at least), he rarely slips up, providing some incredibly exciting sequences: 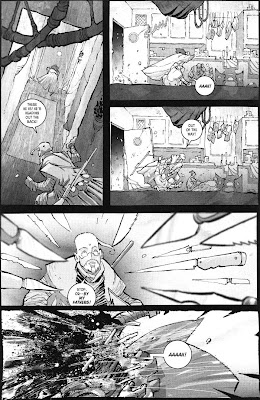 The gore certainly doesn't hurt. And I also love the way everything looks so ancient and dilapidated. This aspect really stands out during a "flashback" sequence to before whatever cataclysmic event caused the land to be so wasted:

The straight, clean lines really stand out against the usual dirty look of the art.

Also of note are the occasional flashbacks that show us Abi's backstory, letting us know how she came to be Jakob's "mother" and join the village she lived in. It's interesting stuff, and lets us know more about who she is. Now we just need to see more about the pasts of Michael and Marcus; I'm sure Johnston has many neat revelations in store.

So yeah, I'm all over this book now; this volume has converted me from an interested reader to a big fan; I'll be switching to monthly readership and following it closely, working up theories as to what is going on and everything. Well done, Johnston and Mitten!

One more note: I picked up the seventh issue a few months ago, since it was supposed to be a standalone story that wouldn't be collected. After reading this second volume, I recommend that any other trade-waiters also search that issue out; it introduces some characters and conflicts that turn out to be pretty important to the volume's story. Even if Johnston says it's not necessary, I think it is. Just saying.
----- 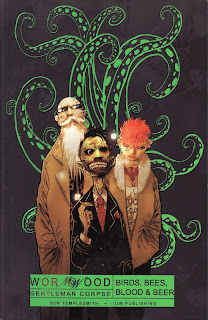 Man, Ben Templesmith is a strange fellow. But I mean that in a good way; it's what makes it possible for him to turn out highly entertaining comics like this one. I don't know where else I would be able to read dementedly violent tales of tentacled demons, worm-steered corpses, bearded robots, magically-tattooed strippers, or demonic pregnancy-causing male enhancement medications. So long live Templesmith and his psychotic imagination!

The story here centers on the titular character, a demonic worm that lives in the eye socket of a corpse, controlling its movements. He is joined by his robotic buddy Pendulum, an ex-stripper bodyguard, and a ghostly detective, and they all end up on cases where they fight demons and such. That's pretty much all you need to know; the pleasure is in the execution, seeing Templesmith come up with crazy visuals and funny dialogue.

And he sure delivers on those counts. Nobody makes art like Templesmith; I love the way he overlays sketchy-lined characters on top of vividly-colored backgrounds. This is especially effective here, when those backgrounds and splashes of color are usually dirty interiors that often get soaked in blood: 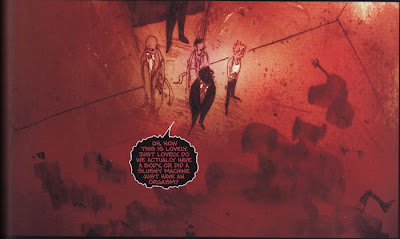 I shouldn't make it sound like the characters are just hastily tossed-off though; Templesmith actually does a fine job of detailing their features, and I love the coloring work that goes into them, adding some real weight and texture: 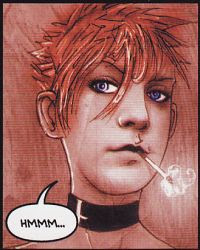 And then there are the freaky monsters, which usually sport plenty of slimy tentacles. Templesmith really brings them to light, making them look horrific and nasty: 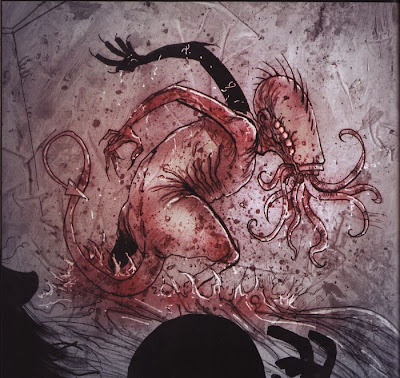 He also usually has Wormwood react to them with joking nonchalance, which really adds to the humor of the proceedings. It makes for a really fun read. And so does the action; I love the way Wormwood's body, being already dead, can get regularly mutilated: 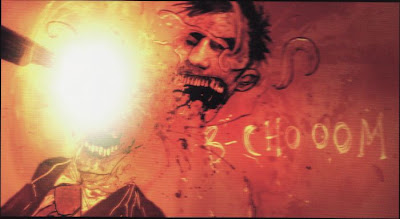 And the sarcastic way Templesmith depicts shootouts had me cracking up: 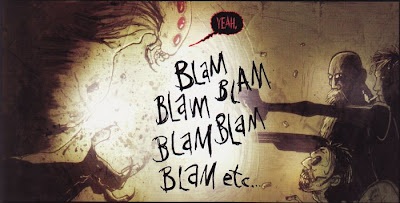 It's the "etc..." that really gets me, but I think the hand-scrawled sound effects are also quite effective, adding to the down and dirty nature of the stories.

So yeah, I don't have any deep insight here, and this isn't a masterpiece for the ages or anything, but it's a hell of a fun read, especially if you dig Templesmith's artwork. I can't wait to read more of this stuff; keep it coming, Ben!
Posted by Unknown at 10:23 PM