The Goon: Powell's back, baby!

Not that he ever left. Along with the thing below (still stalling until I can get to longer stuff, and don't expect anything tomorrow either), I've got a bunch of stuff up at Comics Bulletin: Bat Lash #2, Maintenance #7, and Cory Doctorow's Futuristic Tales of the Here and Now #4. Have fun readin'. And then there's this:

The Goon #20
By Eric Powell 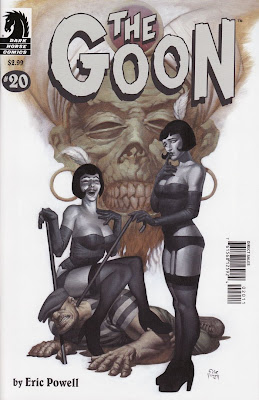 Well, this was nice to see. Eric Powell went for a more serious take on the Goon and his world in the recent Chinatown graphic novel, and while that was quite good, it was also great to see him back in hilarious form on a new issue of the (now monthly!) ongoing series. And sure enough, I started laughing out loud on the first page, with it's description of one of the series typical hillbilly morons, who blamed a sickness on "the dead Mongolian fish monger he believed lived in his bowels." I guess that's funnier in context, but trust me, it's pretty laugh-inducing. And that's just the first page. Later on, we also get a crazy, one-armed, ham-obsessed homeless guy: 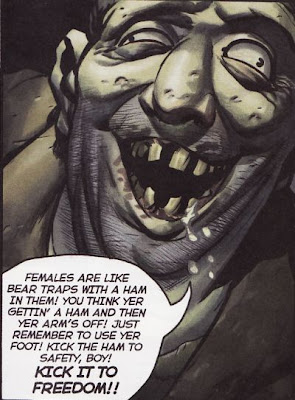 Or the Goon and Franky having a discussion about women and their various merits:

Yup, Powell's back in his regular form. The plot this issue involves some harpy bird-women terrorizing the customers of a burlesque house. Apparently, our heroes have fought them before, but I forget when. In any case, they end up fighting them, and (more) hilarity predictably ensues. Good times as always, and luckily we won't need to wait too long until the next chapter.

Powell's art is still looking mighty fine; he's joined for the foreseeable future by Dave Stewart on colors, but you wouldn't be able to tell the difference. That Mr. Stewart is a talented fellow. And for added value, Powell contributes an extra-long letter column, cheekily answering questions from readers (including spammers) and interviewing/harassing burlesque performers for art reference. Ah, comedy.

So it's not like you need me to tell you this, but check out this book. It's damn funny, and very well drawn. And don't discount stuff like gorilla-punching, whining undead magicians, and illegitimate cat-babies. There's something for everyone!
Posted by Unknown at 8:21 PM