UPDATE again on 1/31: In what might be the final update to this post (yeah, right), there were a couple books from Arcana Studios that caught my attention, so see the first two items below. Also: a couple items from Drawn and Quarterly, as reported by Chris Butcher. So make that four items.
-----

Another UPDATE on 1/28: There were a couple of books from Boom! Studios that seem interesting, so see the new first two entries.
-----

UPDATE: I found one more book worth mentioning, so see the first entry below.
-----

I'm trying out a new format this month, partly because I didn't feel like doing all the work I usually do when compiling what's coming out. Also, I don't know if anybody really cares besides me. So instead of posting the cover and mentioning every comic that interests me or that I plan to buy, I'll just post the ones that I think deserve a mention. You don't really need me to tell you that I'm going to get Madman, Casanova, All Star Superman, and whatever else I buy each month, right? So here's what I've come up with so far, and I'll be indiscriminate about it, just doing them in alphabetical order and mashing all the companies together. Sounds like fun. Oh, and I might edit the post and add more later if I find anything else that I feel like mentioning (namely manga). Here we go: 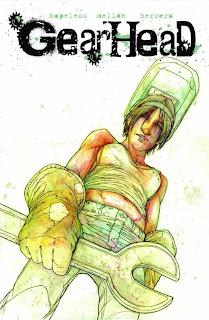 Gearhead - I remember reading about this graphic novel quite a while ago, and it looks like it's finally going to show up. I like the art style, and even though the story has something to do with superheroes, it still sounds interesting. So I'll probably try to check it out. 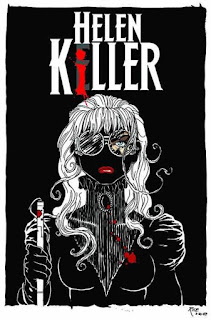 Helen Killer #1 - Okay, now this is just silly, featuring Helen Keller as a cyborg Secret Service agent protecting President McKinley after being outfitted with technology designed by Alexander Graham Bell. Could be fun, in a Matt Fraction sort of way, but it could also be incredibly stupid. But I do like a good high concept, so I'm willing to give it a chance. 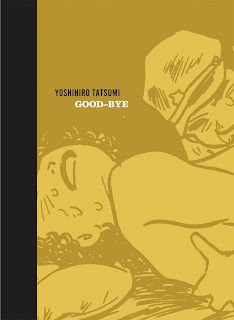 Good-Bye HC - Ah, Yoshihiro Tatsumi, the artsy mangaka that I don't get. Actually, I've only read Abandon the Old in Tokyo, and I thought it was pretty good, but not something that blew me away or anything. I need to read The Push Man and Other Stories one of these days; maybe that will change my mind about him. As it is, I find Tatsumi to be a good book to check out of the library; I don't think I would want to drop $25 on this sort of thing. 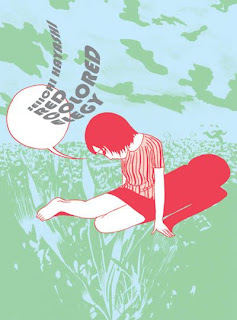 Red Colored Elegy - This looks like another attempt at the same sort of literary manga as the Tatsumi books, so it should be worth checking out. I'll probably try to get it from a library as well. Nice cover.
----- 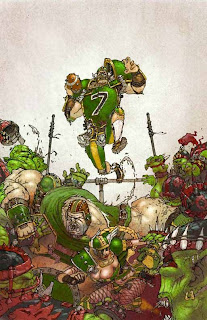 Blood Bowl: Killer Contract #1 - A comedically-oriented fantasy football comic, with "fantasy" here taken to mean elves and orcs and whatnot. That's a pretty funny idea, and the cover makes it look like it could be some wacky, gory fun. It's a high concept, but I find it appealing, as long as it goes well over the top and doesn't take itself too seriously. 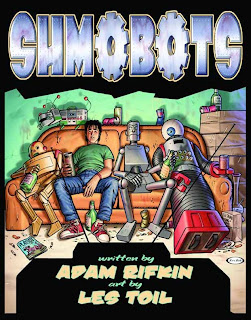 Shmobots - A graphic novel about lazy robots, from film director Adam Rifkin and pinup artist Les Toil. Could be fun, but I personally dig the retro robot designs. The one with the eyeball head, accordion arms, pincer hands, square base, wheels, and multitude of dials is one of those elements that I find impossible to resist. I'd probably buy Green Lantern if it had one of those on the cover.
----- 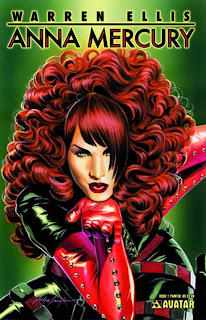 Anna Mercury #1 - Another Warren Ellis series from Avatar. I'm never sure what to think about his books for them; they seem be where he unleashes all the disgusting, disturbing ideas floating around in his head. This one is about a sort of pulp action heroine, and it could be pretty good. I'll definitely read the first few issues, since I'm willing to give anything by Ellis a try. Who knows, maybe it'll turn out to be his next big thing.
----- 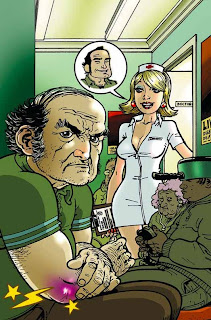 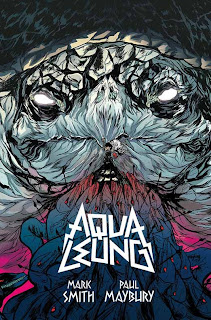 Aqua Leung, volume 1 - This graphic novel looks like it will be pretty cool; I can't wait to check it out. It's written by Mark Andrew Smith (The Amazing Joy Buzzards) and illustrated by Paul Maybury (I don't know what else he's done, but his preview art, including the story in the Popgun anthology, looks great). Don't let me down, boys! 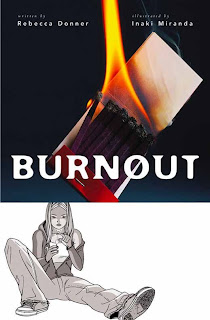 Burnout - One of two Minx books in April, this one is by Rebecca Donner (who?) and Inaki Miranda (who has done some art on Fables). Sounds like it might be good. 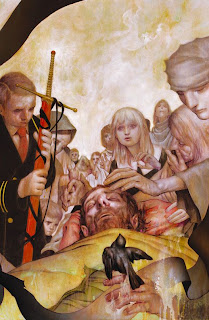 Fables, volume 10: The Good Prince - I've been getting impatient for this story to finish and get collected, so I'm glad to see it's finally on the schedule. Now I'll just have to wait until April... 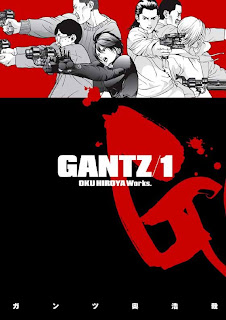 Gantz volume 1 - I've read some of this series in scanlation form, and it's some crazy, fucked-up shit. I'm stoked to be able to actually own it in English. Check it out if you want to see some awesome sex and violence. 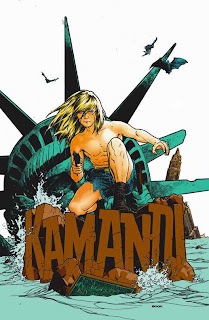 Countdown Special: Kamandi, The Last Boy on Earth 80-Page Giant - As much as I love Jack Kirby, Kamandi is one of those books I've never read. I really need to check it out, so I suppose this might be as good a sampler as any. 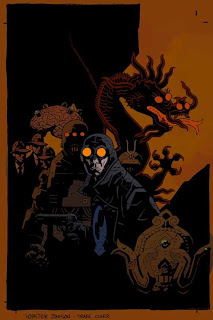 Lobster Johnson: The Iron Prometheus - I heard this recently ended Hellboy-spinoff miniseries was pretty good, so I'll probably end up picking up this trade. 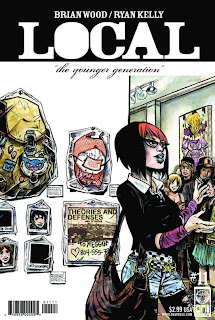 Local #11 - This being an issue of an ongoing series, I wouldn't normally include it, but it comes out so rarely, I'm always excited to get a new one. Plus, it's the penultimate issue! Like all this other stuff, I can't wait. 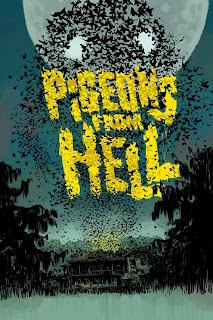 Pigeons From Hell #1 - A new horror series written by Joe R. Lansdale. I don't know if I would be that interested normally, but the art is by Nathan Fox, who I recently discovered when he did some fill-in art on DMZ. He has a really cool, Paul Pope-ish style, and this looks like a great project for him. Plus, Dave Stewart is doing the colors, so it will probably look extra pretty! 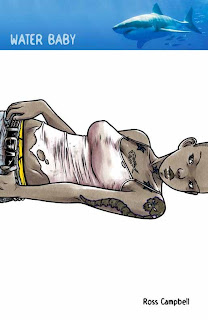 Water Baby - The other Minx book for the month, although it was originally supposed to come out in 2007. I don't know why it was delayed, but I expect I'll get it; I like Ross Campbell's art. 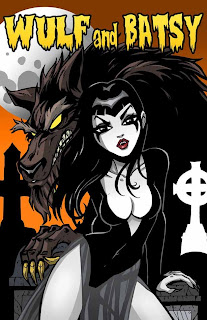 Wulf & Batsy #1 - This probably isn't something I would normally care about (the Josh Howard cover certainly turns me off), but writer/artist Bryan Baugh sent me a few issues of previously-published stories about these characters, and I like his artwork, so I'll probably try to check this new series out. I haven't had a chance to read and review the books yet (sorry, Bryan!), but I'll try to get to them soon.
-----

And I think that's about it. If I see anything else that I feel I need to point out, I will, but I think this will suffice for now. Later tonight or sometime this weekend: more content, probably!
Posted by Unknown at 12:02 PM