Beyond Palomar: Quite a ways beyond it, actually

Hey, I've been quiet this week! Sorry, I had trouble getting motivated. Now I'm way behind again. Maybe that's my problem; I've got to be way behind to feel like I need to catch up or something. Well, sorry to anybody who was waiting for my not-so-wise words. In addition to the piece below, I've also got a (pretty negative) review of Madman Atomic Comics #6 up at Comics Bulletin. Man, I hope that series gets better soon. And then there's this:

Beyond Palomar
By Gilbert Hernandez 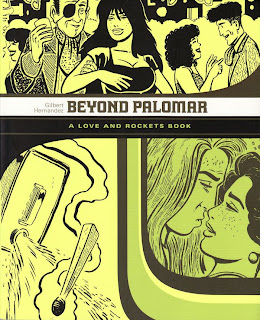 It's probably just me and my feeble brain, but I didn't get into this volume of Gilbert Hernandez's Love and Rockets material as much as I did the two previous collections. Not that it's not full of excellent storytelling, but it just didn't grab me like the other volumes did. Maybe it's because of the extended length of the stories; rather than a whole bunch of interrelated tales, this volume consists of two lengthy graphic novels: the "secret origin of Luba" tale "Poison River" and "Love and Rockets X", a story about Southern California rockers. Or perhaps it's the deemphasis on the regular Palomar cast; Gilbert really built up an interesting and entertaining cast of characters in all his previous stories, but he leaves them behind here, for the most part. Or maybe I'm just having trouble keeping up; the storytelling gets especially complex and hard-to-follow at times, especially in the middle parts of "Poison River".

It's actually quite fascinating to see what Gilbert is doing here. At times, he is telling stories with a huge cast of characters, shifting from scene to scene with little warning. It takes a lot of effort just to keep up; sometimes I just had to go with it and work out the details later (if at all). It all mostly makes sense once you get through it, and you also realize the massive scope of Gilbert's storytelling, but it's a really daunting task; maybe my mind just isn't up for it.

Still, "Poison River" is a fascinating story, relating the events of Luba's life from birth all the way until she came to Palomar. But there's plenty of other stuff going on at the same time; huge portions of the story almost ignore her and focus on what's going on with her husband, Peter, the gangsters he works for, his band, his ex-wife, his father, and other various political factions. Like I said, it's tough to keep it all straight, and Gilbert doesn't always make it easy. For example, here's a page in which every panel depicts a different scene, with little in the way of segues or indication as to changes it time, setting, etc.: 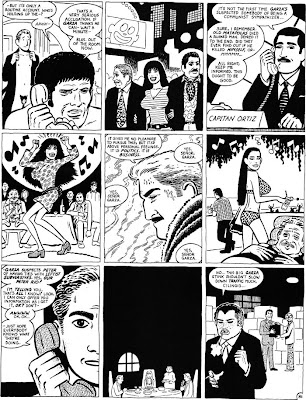 Eventually, it all works out to be a sort of "collage", and we learn how all the characters and scenes relate to each other, like a Robert Altman movie or something. But it's still pretty disorienting, even at one point looping back in time to spend a few chapters filling in details about some of the characters' pasts. It's amazingly complex, but pretty rewarding, given the effort.

I don't know; I could probably go over a lot of the plot points and try to work out my feelings about them, but I think I'm still processing them. Give me ten years or so, and I'll get back to you on that. But in the meantime, I can point out some things that I really liked, mostly about the art. I did mention one nifty aspect a few weeks ago, and that's only a minor piece of Gilbert's artistic excellence. There's also his chapter title pages, which each feature a certain character at different points in their life: 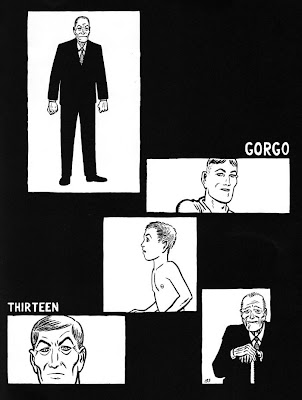 In fact, there's a major revelation about one character (Isobel, for those who have read the story) that gets "spoiled" on one of these title pages, and I completely missed it; when I looked back later, I felt pretty stupid. I also love Gilbert's stylistic choices, like his depiction of music here: 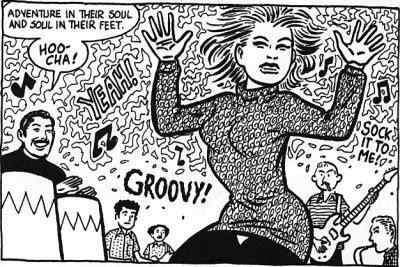 And here's a nice bit of storytelling that I picked up on: early on, when Luba is still a young child, she's living with her cousin Ofelia's family, and Ofelia always gets stuck babysitting her. So she uses the ol' threat of violence to keep Luba in line: 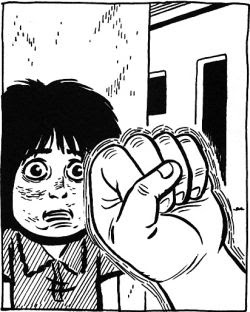 But later, there's a really dramatic, dangerous moment (which I won't spoil), and Ofelia is put in a position where she's helpless to do anything to stop it, and the only way she can keep Luba safe is to give her that same gesture. It's a powerful bit of storytelling; what was once an expression of exasperation becomes a gesture of protectiveness. Amusingly, well over 100 pages later, the grown-up Luba is reunited with Ofelia, and Ofelia does the same thing to try to win an argument, but Luba, on the track to becoming the strong-willed, no-nonsense lady we all know and love, will have none of it: 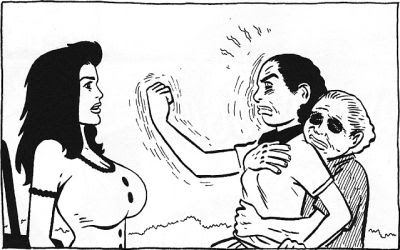 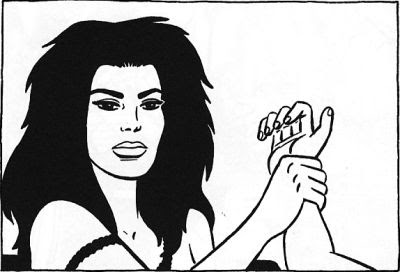 It's a great reversal, letting us (and the characters, for that matter) know that the dynamic of power in their relationship has shifted.

So those are my thoughts on "Poison River". The other part of the book, "Love and Rockets X", is an enjoyable tale of crazy California personalities, and it's a bit easier to follow, if only because it's about 60 pages, as opposed to "Poison River"'s 180 or so. The main focus of the story is a garage band who are a sort of spoof of the British group that stole the name of the comic. But Gilbert gives them all interesting personalities, along with all the various characters surrounding them, including Luba's daughter Maricela and her lover Riri, who left Palomar during the "Human Diastrophism" storyline. I think I enjoyed seeing her development the most (along with the brief glimpse that we get of the other Palomar denizens); it lessens the jarring jump from naive teen to assured adult that we had previously seen.

So overall, while it's not my favorite Love and Rockets volume, there's still some damn good storytelling here, and some amazing art. Gilbert has created a complex universe so full of distinct personalities and fascinating events, I feel like I'll never get a complete grasp of it. But I'll sure enjoy trying.
Posted by Unknown at 5:43 PM