Jumper: Jumpscars: These scars are of the emotional variety, I suspect

Not too much news at the moment, so let's get right to tonight's thing: 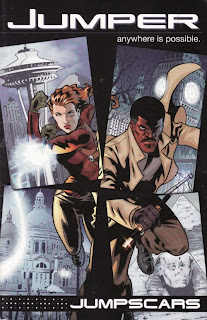 I never finished reading the novel that the new movie Jumper is based on (there's kind of a story behind that, but it's probably only interesting to me, so I'll skip it), and I always regretted not knowing how it turned out. I'll probably end up seeing the movie (I don't think too highly of Hayden Christensen, but Samuel L. Jackson is always cool, and the action scenes look pretty awesome and innovative), but from what I hear, it doesn't have too much in common with the book, other than the central premise of a guy that is able to teleport himself to anywhere in the world. But while I doubt I'll get to the book anytime soon, and the movie will probably have to wait until DVD, I do have this prequel comic that effectively sets up the background of the plot. So at least there's some outlet for my teleportation cravings (I can also dig up some comics featuring Nightcrawler if they get especially bad).

Apparently, in the world of the film, people occasionally are born with the special ability to teleport, or "jump". But there's also a secret police force, called "Paladins", who hunt down these "jumpers" and terminate them. Judging by the reviews I've read, the movie doesn't give them much motivation, other than a line or two in which one of them says something like, "Only God should have the ability to be everywhere at once." That's not too egregious for an action movie; people would probably rather just focus on special effects and teleporation-based fighting. But it's an interesting idea, and writers Nunzio DeFilippis and Christina Weir use this prequel to explore it a bit, giving the Paladins a bit more backstory and motivation.

It's an interesting reversal; rather than following a jumper, the book sticks with Jessica, a young woman who is a Paladin-in-training. Actually, her younger, earlier days as a trainee, which make up the bulk of the story, take place in flashback; in the present, she is tailing Hayden Christensen's character in order to determine whether he should be terminated. She ends up making a decision and taking a side in the conflict (I'm not sure if her character shows up in the movie or not), but the flashbacks show us what led her to that point.

In that first mission, she moves into an apartment building where jumper activity has been detected, hoping to find out who the culprit is. We learn that they are usually young kids, since the Paladins catch and do away with jumpers before they get old enough to be really dangerous. This sounds pretty horrible, and we see a sequence in which she and Samuel L. Jackson (that's him on the cover, before his hair turned silver) hunt down another kid jumper with the intent of killing him. It's hard to take (they are the bad guys, after all), but we do also learn some of their motivations, which make it seem like they aren't completely misguided. Basically, they assume that jumpers, lacking any physical (and thus moral) restraints, will begin to view themselves as above other humans, and thus endanger everyone else. It's a bit of a weak justification for child murder, but wars have been waged for less.

So anyway, Jessica suspects that this kid in the building is the jumper, but she wants to get concrete proof, if possible. Hey, you don't want to go around killing kids for no reason, right? She also ends up forming a relationship with the building supervisor, a cute guy who travels around a lot. You can probably see the obvious twist coming, but that's part of the tragedy of the story, and it helps us understand the choices she makes in her career. It's not a bad bit of writing, and I bet it will inform my viewing of the movie, whenever I get around to it.

And luckily, illustrator extraordinaire Brian Hurtt (The Damned, Hard Time, Queen and Country) provides the artwork, so it's also a great-looking book, full of nice character work and beautifully-realized locales. He really makes the characters come to life, putting the reader right in the moment. And he also makes the action jump right off the page; there are some bursts of violence that are really shocking (I did mention the child-murdering, right?). As much as I like Hurtt's moody black and white art in The Damned, it's also really nice to see it colored, and Jared M. Jones, Dean Trippe, and Pop Art Studios do and excellent job on that here. I especially dig the teleportation effects, which seem to mirror the style of the movie very well.

So, it's a pretty good little book, in my opinion. It's probably not of much interest to anybody who doesn't plan to see the movie, but it seems like it's been doing pretty well at the box office, so maybe some of those viewers will want to seek out this prequel. So if you're one of those people, I urge you to give the book a try.

This review was based on a complimentary copy provided by Oni Press.
Posted by Unknown at 7:06 PM