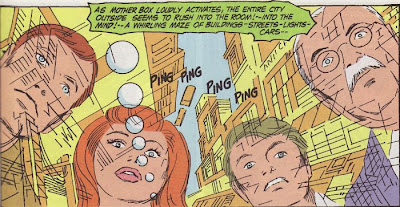 I love the way the vision rushes through the characters' faces here, and even though it's a terrestrial cityscape, the plunging perspective makes it look bizarre and alien. Also in this issue: Kirbytech! 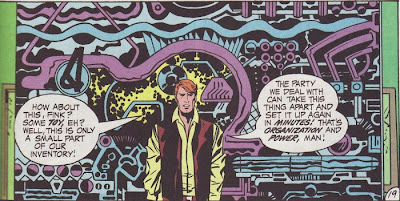 I love that stuff. "My wife makes me carry an umbrella in case it rains!" "Things that would scare John Wayne!" And Kirby has so many different flavors of his crazy talking, like this issue's gangsters with their Jimmy Cagney-like lines: "Yer gettin' it, country boy! In another second, that dum dum'll get paid off for thinkin' too hard!" Then there's Darkseid, who pops up to look menacing and say things like, "Oh, how heroes love to flaunt their nobility in the face of death! Yet they know better than most that war is but the cold game of the butcher!" And finally, there's Orion's sendoff to his fallen New God: 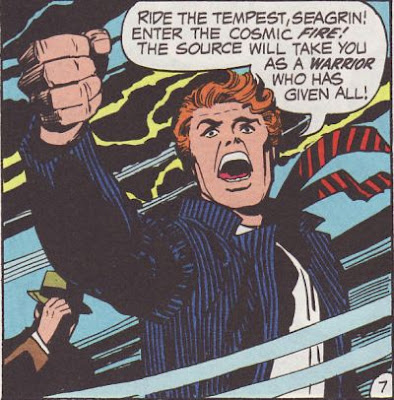 Beautiful. It's another excellent issue, from Metron's tour of a young, prehistoric world, to a Black Racer flyby, to a crazy underwater cliffhanger. My only complaint would be the habit Orion's sidekicks have of restating their full names once an issue, as if they're trying to make us remember that they're still in the story alongside the cool, colorful characters. I hope Kirby doesn't keep that up for much longer. But he can keep up the explosions, cool sound effects (PWOW! BAROOM! RRRRSSSKK!), and cosmic ideas forever. He will in my head, anyway.
Posted by Unknown at 6:10 PM