Blue Pills: In the book, they're black and white

It's a day later than promised, but here's the review I said I would have. And I've also got that look at Fantastic Four: The Lost Adventure up over at Comics Bulletin. Plus, I wanted to point out that the new "issue" of MySpace Dark Horse Presents is up, and it features a new story by Gilbert Hernandez, along with a fun story by Fabio Moon and Gabriel Ba. Check it out. 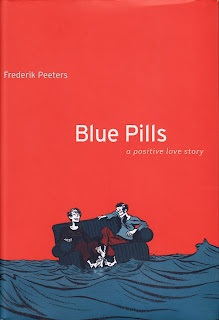 Blue Pills, being an autobiographical story about the author's relationship with a woman infected with HIV, sounds at first like it would fit in the dubious genre of "cancer comics", the sometimes-loathed type of artsy comics that seek acclaim due to their serious subject matter (it also has elements of the "Shy Schlumpfs in Specs Comics", making it doubly unlikable to the stereotypical comics fan), but it turns out to be a different sort of animal. Rather than wallowing in the depressing sorts of stories that one would expect, the book is more of a love story, with a bit of a twist. There is a fair amount of material dealing with the disease, but Peeters goes with more of an internal focus, detailing his thoughts and feelings and relating how he feels about his life and his relationship with his not-exactly-ailing partner. It's more of a celebration of love and life, instead of a grief-laden depress-o-fest.

Peeters makes an interesting lead, spending most of the book philosophizing about life and love. He doesn't get into the other characters' heads too much, instead focusing on how he relates to them and endlessly working it out. Being an author, he is also obsessed with what type of story he is playing a role in. For some, this might be excruciating, but I found it charming; they're the kind of musings that everybody takes part in at a certain point in their life, wondering where you fit in the "big picture".

But even so, it's good that the entire book doesn't take place in Fred's head. There's an overarching plot involving his relationship with Cati, a beautiful young woman that he falls for. It's nice to see a real-life depiction of the struggle with the disease. She's not consumed by it; it's just a nuisance to be dealt with. The real problems have to do with her son, who also is infected. That's where the guilt and worry take over, and I love the way that Fred helps her with that burden, providing a place of comfort and strength.

Peeters does a great job with the graphic storytelling, beautifully illustrating the conversations and flights of fancy. He uses a lot of thick lines that might seem scratchy or messy at first, but actually are very well-placed, telling the story clearly. He does a great job of detailing environments: 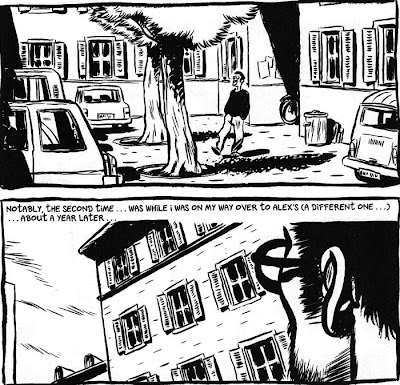 Along with the subtleties of conversation: 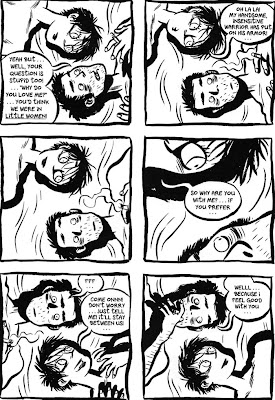 That sample is actually from an extended sequence in which Fred and Cati lay in bed discussing their relationship, and it's beautifully done. Rather than keeping the same static view of the pair, Peeters switches their positions back and forth in sync with the rhythms of the conversation, occasionally pulling out to see their entire bodies and making the bedspread seem to continue forever, like they're the only people in the world. It's a lovely scene, and there are many more like it in the book, including a fun penultimate chapter in which Fred discusses his life with an imaginary mammoth. The mammoth, being an extinct species, makes a good symbol of death, and a nice foil for Fred's anxieties about love, death, society, and everything else. 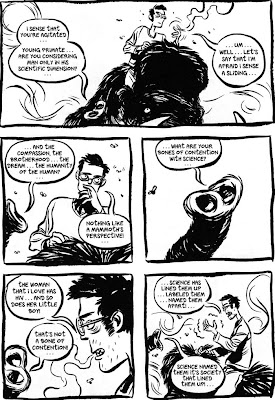 Another excellent bit occurs when Fred and Cati have a scare, thinking that he might have been accidentally infected. It's tense and emotional, especially on Cati's part. We worry for her along with Fred, since she's already so guilty about her son; how could she bear the fact that she also infected her lover? But then the tension deflates when they visit the doctor (another wonderful, realistic character), who tries to reassure them with an odd analogy, saying that Fred has "as much chance of catching AIDS as you have of running into a white rhinoceros on your way out!" All the couple can do is stare blankly and ask if the circus is in town. It's a funny moment, and one that seems all too real.

On a slightly negative note, I do find Peeters' depiction of women (limited to Cati, for the most part) kind of offputting. Cati has a strange face that doesn't quite look right, perhaps because of her huge, manga-esque eyes. But her head is also oddly-shaped, with a large cranium and narrow jawline. This might be a subtle way of making her look kind of thin, like she's losing weight because of the disease. Or maybe it's just a stylistic choice that I don't especially like. It's unfortunate, because everyone else is masterfully realized, even incidental characters like these: 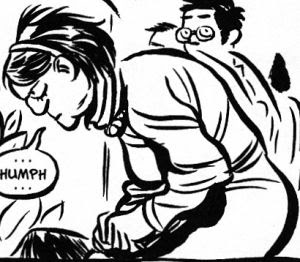 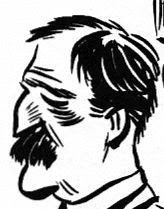 But that's really a minor complaint, and one of taste. The only other thing I would gripe about is the lettering, which is all upper case except for 'i's and 't's, for some reason. It seems a bit odd at first, but you get used to it. Minor grievances are easy to ignore in a story this good. Peeters really weaves a fascinating, moving tale here, one of hope in the face of death and love (of the real-world sort, not the stuff of fairy tales) conquering human problems. It makes me hope for a follow-up, so I can see what has happened to Fred and Cati in recent years. That's the real testament to the book: it makes me feel like I've gained a friend.
-----