Hey, another review! In the midst of Kirby celebrations! Just call me Mr. Prolific! 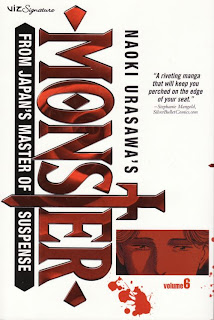 Lots of goodness in this volume of the series. It concludes the cliffhanger at the end of volume 5, adding to the ongoing contest between Dr. Tenma and Inspector Lunge, and ending with a nicely chilling picture of Lunge's intense drive to capture Tenma: 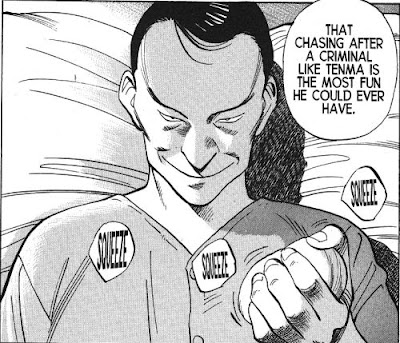 Then we get a few chapters following Tenma's ex-fiancee, Eva, who has fallen into drunkenness, finally hitting rock bottom when she passes out on the street, gets robbed, and is thrown in jail for the night. The last time we saw her, she had barged into Lunge's office and offered to help capture Tenma. We never saw what happened after that (at least not yet), but he must have turned her down, letting her spiral down into despair and self-pity. It's a pretty pathetic picture, as we see her do things like steal alcohol from a homeless guy or smoke a cigarette butt that she finds on the ground: 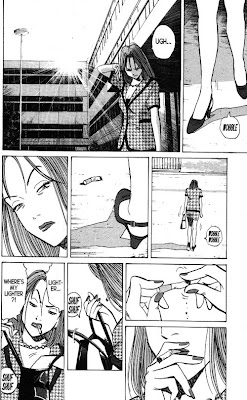 Things seem to look up when a seemingly nice guy helps her out, but we know he's going to be trouble when we don't get to see his face for the first few pages after he appears. Sure enough, he turns out to be the creepy thug from volume 5 who is somehow connected to Johan, tailing her to find out what she knows. This leads to a confrontation with Tenma; a tense scene involving Eva, Tenma's ward Deiter, and the creepy guy; and more confused emotions about her relationship with Tenma including a firmer resolve to take him down. It's masterfully done and perfectly paced. Just check out this page for an example: 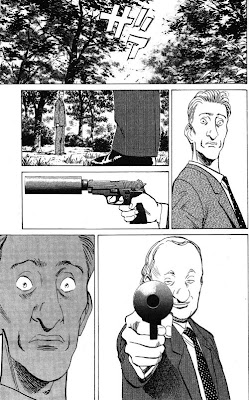 I also love Urasawa's depictions of Eva; she's always so bitter and hardened, it's especially effective to see the facade crack when she remembers Tenma: 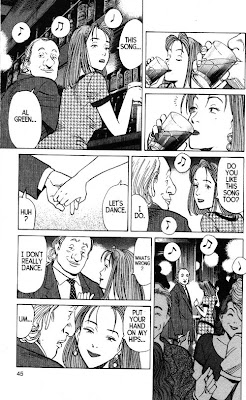 There's also a flashback sequence in which she tells about seeing Johan (in a different view of Tenma's first encounter with Johan as an adult, the climax of volume 1), and it's heartbreaking to see her fall apart soon after losing Tenma. She hadn't become quite as hardened at that point, so we still see more actual emotion show through: 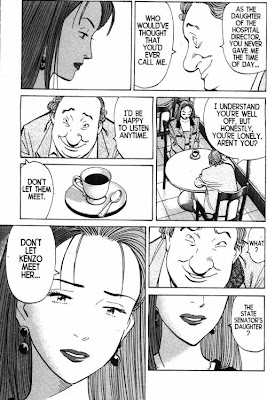 And that's just the first half of the book! The second half jumps to a new location (I love the way Urasawa abruptly plops readers into stories in a new location, featuring previously-unseen characters, and then lets us get caught up as the story plays out), a university in Munich, where some students investigate an old man who is rumored to control Germany's financial markets. One of the students is the man's illegitimate son, and he just wants to find out about his father, but they end up caught up in some intrigue involving Johan, who actually makes some extended on-panel appearances. Urasawa has built up the legend of Johan for so many volumes, it's a real event when he finally shows up to play a part in the story. And he's creepy as hell, especially since (and I know this isn't exactly a blazing innovation or anything) he seems like a nice, friendly guy. In one memorable chapter-opening image, he is even seen surrounded by children: 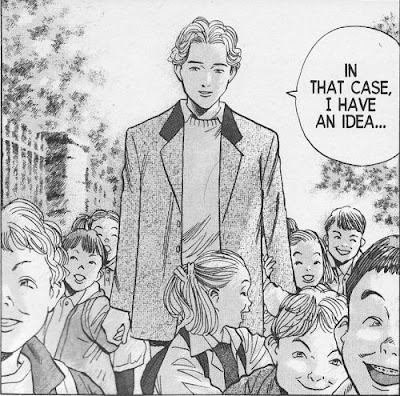 All our prior knowledge about his actions just makes the blood run cold when you see a seen like that.

The whole plot about the old man and his son doesn't finish in this volume, making for another cliffhanger that will certainly draw me right to the bookstore for the next volume. Urasawa can really put together an intriguing story; I can't wait to see how it plays out. 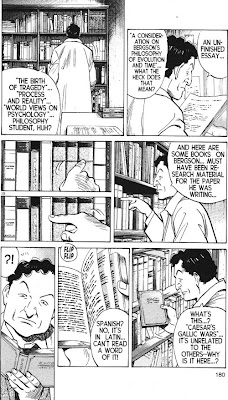 He also extends some panels containing exciting or emotional moments in this way, which makes them seem "bigger": 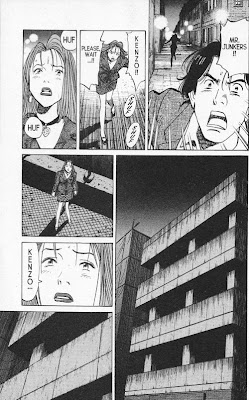 But he's not showy or overly flashy with these techniques. He's just a solid storyteller, putting together an exciting tale for us. It's amazing to watch, and incredibly enthralling. I can't wait to find out what happens next.
Posted by Unknown at 7:44 PM