Darkseid has the "common touch"!

Since I'm reading the second volume of the super-awesome Jack Kirby's Fourth World Omnibus, it's time for another round of daily Fourth World panels! I did this last year when I read the first volume, taking one panel (or occasionally more) to highlight from each issue in the book. Here's a good example, and you can click the "Fourth World panels" link at the bottom of this post to see all of them.

So, to start off this volume, here's today's panel, from Forever People #4, chosen because I love the awesomely wacky artwork: 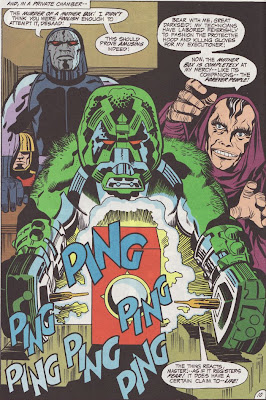 That's not even the highlight of the issue for me. The story sees the team captured and imprisoned by Desaad in his "Happyland" theme park. It's a genius idea by Kirby, with the heroes trapped in some form of torture in full view of the parkgoers, but "scrambled" to look like part of the attractions. Here's a favorite, featuring Beautiful Dreamer: 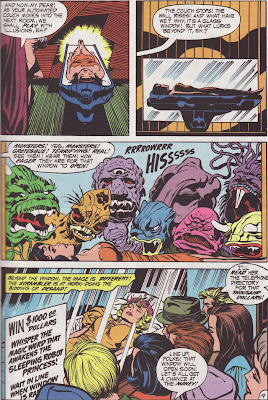 That's some pretty horrific stuff. And then there's an incredible scene, in which Darkseid visits to check up on Desaad and then goes out for a walk among the humans. They think he's just a guy in a costume, except for a little girl, who finds him scary. She gets shushed by her father, and here's Darkseid's response: 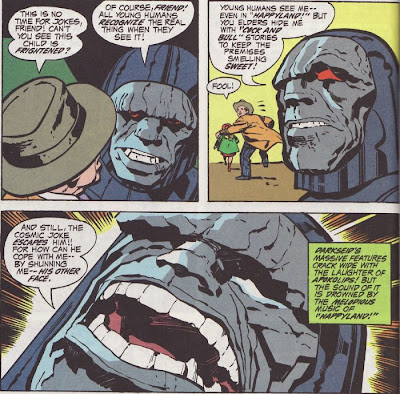 Okay, more tomorrow! And maybe even a review of some sort!
Posted by Unknown at 8:28 PM