Before I start, I have to link to Jog's latest column on the Savage Critics, in which he discusses the work of horror mangaka Hideshi Hino. After reading that, I feel that my latest mission in life is to track down and read Hino's Panorama of Hell. Wow, it looks fucking insane, in all the best ways.

In other news, I see that Brian Wood and Becky Cloonan will be doing a new six-issue Demo series for Vertigo. Awesome. I loved the first series (even if I was a couple years late getting to it), so I'm all for more of it. Wood is one of my current favorite writers, and Cloonan is a current favorite artist, so I'm stoked to see them do more work together.

Okay, on with the show: 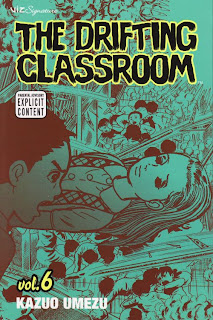 Behold, the face of childhood evil:

Man, that is one creepy-looking kid. That's right there on the first few pages of this volume, and it makes me sorry I had gone so long without reading this series. At first, I had forgotten what was going on at the end of the last volume, but I got right back into the swing of things; the kids stuck in their horrible future wasteland were all dying of bubonic plague, and that mean kid had led a group of troublemakers and trapped our heroes in a building with a plan to burn them to death. Good times.

Man, every volume of the series is full of that sort of delightful awfulness, with kids exhibiting the worst humanity has to offer in terms of distrust and murderous impulses. This volume veers a bit from the formula though, spending over half its length in the present day, following protagonist Sho's mother as she tries to figure out how to send a cure for the plague to him in the future. It's as crazy as everything else in the book, as we see her pursue her goal of helping Sho, shoving aside anyone in her way, to the point where people think she's gone nuts: 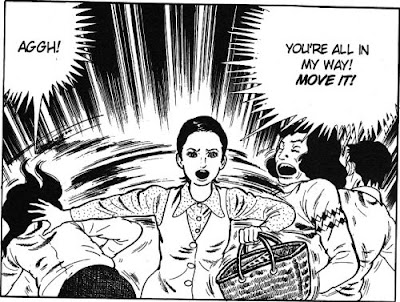 Interestingly, there are a few scenes where she is confronted by the mother of another of the missing children, who blames Sho for her son's disappearance. But Sho's mother shoves her aside and refuses to listen to her, giving her the same treatment she has been getting from everyone else. I'm not sure if this is supposed to represent anything, but it stuck with me. Is it a comment on how even those with noble goals can be single-minded, ignoring the plight of others? Maybe Umezu will do more with these characters in future volumes.

Also of note in the "Sho's mother" chapter is a harrowing scene in which Umezu shows that the ruthless, violent attitudes and actions of the kids aren't exactly a deviation from the norm. While she is at a baseball game planning to confront a famous player (it's a long story), her actions cause a giant brawl to break out, with fans and players rushing the field in a near-riot: 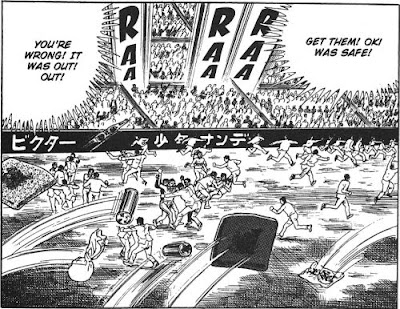 Key dialogue: "Kick the shit out of her!" Oh, Umezu, how you give me pleasure.

I know Matt Thorn said I was trying too hard to find metaphors in this series, but I've got another one that hopefully isn't too far off base. We learn that the plague was caused by a couple of diseased pet squirrels that a diplomat brought back from the United States. It sounds to me like a representation of fear that the influence of foreign cultures is corrupting the younger generation. Or maybe Umezu just hates squirrels.

In addition to the myriad deaths by plague here, we also get to see some drownings, accidental decapitation, and quicksand-related tragedies. That Umezu gets pretty innovative with the means of juvenile death. I don't know how he's going to keep up this carnage for another five volumes, but I can't wait to find out.
Posted by Unknown at 11:57 AM